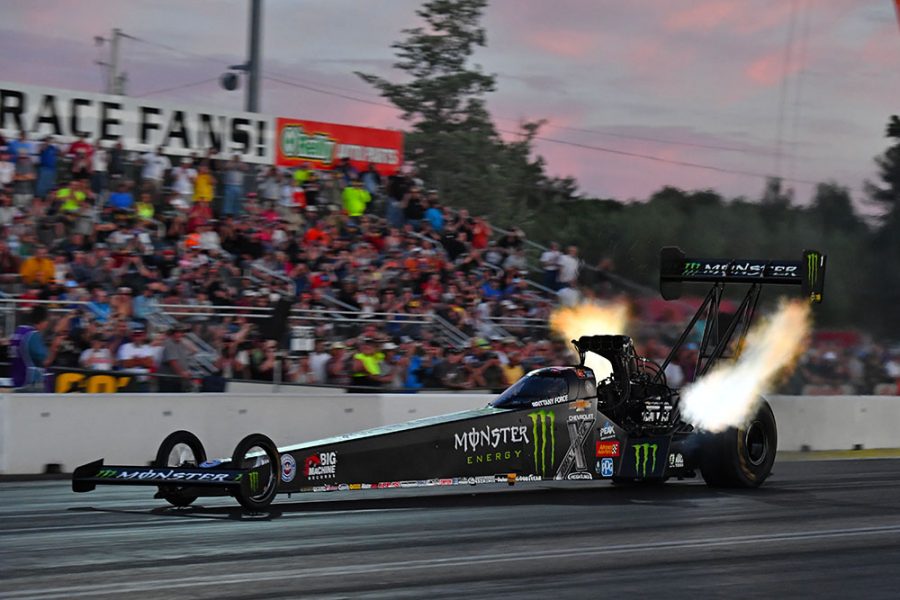 EPPING, N.H. (July 6, 2018) — Brittany Force and the Monster Energy dragster are qualified in the fourth position after two rounds of qualifying at the NHRA New England Nationals at New England Dragway. In Funny Car, Robert Hight is No. 5, John Force follows in No. 6 and Courtney Force is No. 10.

Brittany Force piloted her Monster Energy dragster to a 3.775-second pass at 316.60 mph during the second qualifying session to end up No. 4. It was a drastic improvement from her first qualifying pass that was all tire smoke and put her 13th.

“In Q1 we just went out there and blew the tires off. There was no point in pedaling it.,” said Force, who is nominated for the Best Driver ESPY after winning the 2017 Top Fuel championship. “It was a little bit of an interesting run in Q2. It went down there and blew up. It put a 3.77 on the scoreboard and it moved us up to the No. 4 spot. That is a good position to be in going into Saturday. We will be working to hopefully jump up to that top spot.”

Force is racing for her first No. 1 qualifier at New England Dragway. She won the event last year from the No. 2 position.

“I have a lot of confidence in this team with crew chiefs Brian Husen and Alan Johnson. I knew they would get it set up for the second run and I know we’ll be ready for tomorrow and going into race day,” continued Force.

Robert Hight and his AAA Northern New England Chevrolet Camaro SS Funny Car powered to a 3.979-second pass at 324.44 mph during the first qualifying session. Their efforts, which came after some changes to his AAA Camaro and testing between races, put them in the No. 1 spot heading to qualifying round two. Hight was unable to improve but laid down a solid 3.991-second pass making the defending world champion optimistic.

“We made two good runs today. The testing we did in Norwalk last week definitely paid off. It just burned the clutch out of it tonight in Q2 and I knew it going down the race track. I could tell the clutch was going to go out of it. What I am pleased about is even with all that going on it still ran a 3.99,” said Hight, the two-time and reigning Funny Car world champion. “We get that fixed and we will be at the top because it had numbers to do that. It was hurt in a second and it was just way behind but it still ran 3.99. That is very encouraging. We probably won’t have conditions like this again the rest of the weekend. If we can run like we did in the first session with that 3.97 tomorrow and Sunday, we will be right where we need to be.”

Following behind Hight is 16-time world champion John Force and his PEAK Coolant and Motor Oil Chevrolet Camaro SS. Force started his day with a 4.021-second pass that was good enough for No. 3 at the end of the first session. His second qualifying pass was an improvement at 3.988-seconds and 324.75 mph but the near perfect conditions had the entire class improving and put Force at No. 6.

“We are learning about this combination. We are going A to B. Jon Schaffer and Ronnie Thompson are getting this car running,” Force said. “I am excited because every run this car goes to the other end. We ran 4.02 and then we ran a 3.98. We want to keep this race car in the top half. We are running to win rounds and move up in the standings to get into the Countdown. We want to win this race and that is what we are working towards. That is why I am here.”

Mello Yello points leader Courtney Force and her Advance Auto Parts Chevrolet Camaro Funny Car had an uncharacteristically difficult day of qualifying. They coasted to the finish line during the first qualifying pass for a 6.713-second pass after her Chevy went up in tire smoke. It put her in 13th. Force improved to 10th with a 4.261-second pass at 217.39 mph after shutting off early during the second session.

“Those were not the two runs we were hoping to make today. We were looking to improve on Q1 in Q2 with the good conditions. I stepped off the throttle down track. The car felt like it was heading to the inside to the center line so I got out of it. It was a bummer to have lost that run,” explained Force. “We will get back at it tomorrow. Hopefully we can move up because being in the No. 10 spot is not where we want to be going into race day. I have a great group of guys on this Advance Auto Parts team and we will get this race car fixed up for tomorrow.”