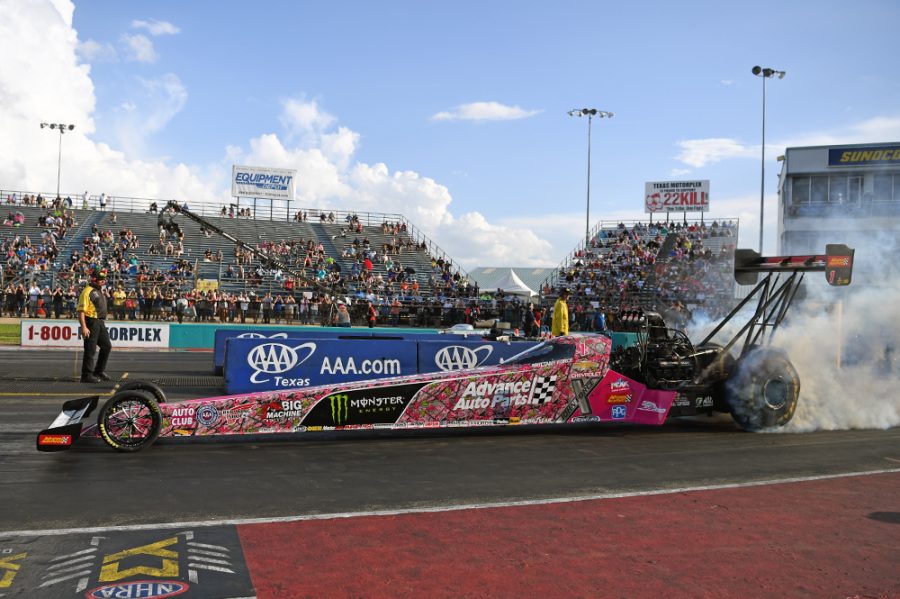 ENNIS, Texas (Oct. 6, 2018) — Top Fuel world champion Brittany Force will head into race day at the AAA Texas NHRA FallNationals in the No. 5 spot after two days of qualifying at Texas Motorplex just outside of Dallas. Robert Hight leads the John Force Racing Funny Cars in the No. 6 spot, John Force is 10th and Courtney Force is 12th.

Off the efforts of their 3.781-second pass at 326.71 mph from Friday evening, Brittany Force and her Advance Auto Parts team will line up with Scott Palmer on Sunday. On Saturday, the team started the day with a solid 3.837-second pass at 321.42 mph during the heat of the day. The final qualifying session didn’t go as planned, the tires lost traction and Force had to shut off early.

“I feel confident going into race day. We made some big moves this weekend with this TrueTimber Advance Auto Parts Top Fuel dragster. We made two awesome runs and we are No. 5 going into race day which I think is a great spot,” Force said. “We made some big moves but really tomorrow is where the focus needs to be. We are still looking to move up in the point standings.”

“We need to make some serious moves but I think this team is capable of that. They front-halved my car and I think it showed this weekend. You have to get used to it but I am ready for tomorrow. We won here last year and we are looking for a long day tomorrow.”

On the strength of two solid runs today, defending AAA Texas Fall Nationals champion Robert Hight likes his chances of picking up his fourth win at Texas Motorplex tomorrow. Hight and the AAA Texas Chevrolet Camaro posted the second quickest run of the third session and the third quickest run of the final qualifying session today. He picked up three critical qualifying bonus points and more importantly will go into race day with lane choice over veteran racer Jim Campbell.

“I think we’re in pretty good shape,” said Hight. “We made two good runs today; got some (qualifying bonus) points. We’re not the quickest and I know that bothers Jimmy but we’re qualified top half and that’s what we needed to do. Tomorrow we need to step it up. Consistency will win. 3.98, 3.97, those were two good runs today.”

Hight holds a 3-1 career head to head record against Campbell and beat him the first round of the AAA Texas FallNationals last year on the way to victory. Conditions will be a key element to success for Hight as well as the rest of the Funny Car field. Hot temperatures and high humidity created a number of issues for all the Mello Yello Series teams.

“I think (conditions) will be critical. It’s going to be cloudier tomorrow so you’re going to have to step it up a little more and run a little harder,” said Hight. “But I’ve got the best in the business at doing that. I’m glad I’m not home watching this on TV. I’m glad I’m here in the middle of the game. We’re the defending champs and if we want to win a championship, we need to win this race.”

John Force, chasing his 150th career victory, qualified 10th with a 4.045-second pass at 319.67 mph from Friday. The 16-time world champion had a dropped cylinder and had to shut off early to start Saturday qualifying. During the final session, side-by-side with daughter Courtney Force, John had a clean run at 4.054-seconds and 316.08 mph.

“I always think positive. We were up in the top half and then we got bumped back into the bottom half but we have won from there before. (Ron) Capps is struggling too and it will be a good race,” Force said. “He has a good race team and this PEAK team is pretty good too. We are going to go out there and give the fans a show. If I am going to get into this champion hunt I am going to have to make some moves tomorrow.”

“I like Texas and I love the fans. I always said if I didn’t wind up in California then Texas was somewhere where I would live. This track is great and we have a lot of history here. Maybe tomorrow I can make some more. It will start with that first round race against Capps.”

Force is 58-39 when facing Capps, the 2016 Funny Car champion, but is 1-4 this year. His one win against Capps this season came in the final at Denver and secured his record 149th career victory. At the Texas Motorplex, Force has a 4-2 advantage.

“It’s going to be a tough match-up, but I think it will be good to get it out of the way,” said the 12-time tour winner. “He’s definitely one that we’ve got to watch out for in this Countdown to the Championship (and) I think it’s better to run him right off the bat and try to get ahead.”

Although the crew on her Advance Auto Parts Chevrolet Camaro SS was chasing a mechanical gremlin Saturday evening, Courtney was encouraged by the fact that the FallNationals is one of the two Countdown races in which she has celebrated a victory (2014). Moreover, despite the disparity in experience, she has raced to a draw with Beckman over the course of her career. She is 10-10 overall, 1-1 this season and 3-3 over the last two years.

“Our Advance Auto Parts team struggled a little bit through qualifying with the automatic shutoff,” she said, referring to an NHRA-mandated system that automatically shuts down the engine in case of a malfunction. “Hopefully they can solve that problem tonight and be ready for tomorrow. I’m really looking forward to going rounds in this pink breast cancer awareness Funny Car with the TrueTimber camo for Advance Auto Parts and the Young Survival Coalition.”