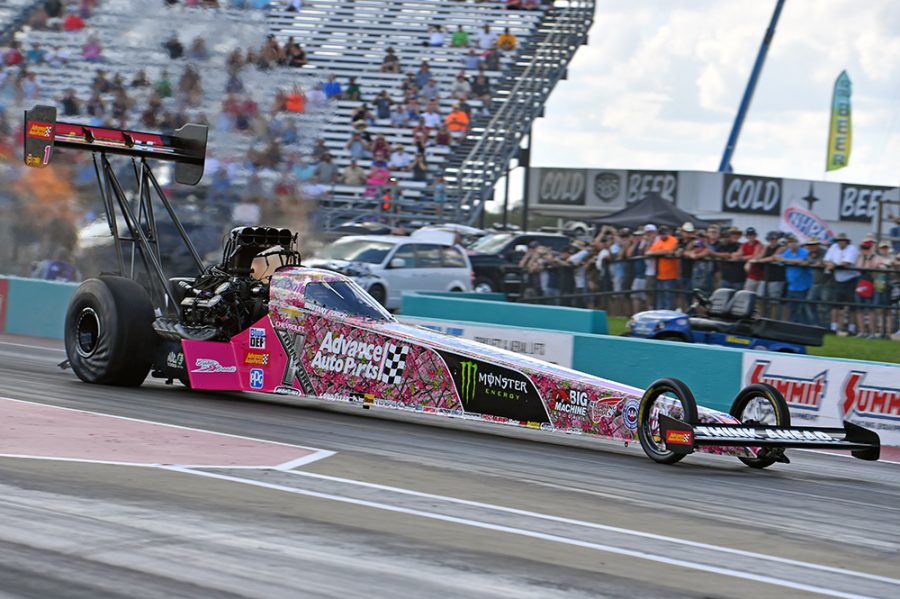 ENNIS, Texas (Oct. 5, 2018) — Reigning event champion Brittany Force piloted her Advance Auto Parts Top Fuel dragster to the No. 3 qualifying position Friday night at the AAA Texas NHRA FallNationals. In Funny Car, Robert Hight powered to the No. 7 spot just two weeks after a massive explosion and win in St Louis. John Force is sitting in the No. 8 spot and Courtney Force is currently No. 11.

During the heat of the day, Brittany Force, sporting a TrueTimber pink camo paint scheme in support of Breast Cancer Awareness month, smoked the tires to land the Advance Auto Parts Monster Energy team in the No. 13 spot. The reigning champ was in good company at the bottom of the pack, three-time world champion Antron Brown was 14th while current point leader Steve Torrence was 12th.

Side-by-side with Brown in Q2, Force had a stout 3.781-second pass at 326.71 mph that temporarily put her in the No. 1 spot, she ended up being third quickest and earned a bonus point for the performance.

“That was an awesome run from this Advance Auto Parts dragster. I hate saying this every weekend but we have been struggling. We front halved the car between races and to come out here and make that first pass is a little nerve-racking. The first run we were trying to run too hard on a track that wasn’t good enough,” explained Force. “The second run (crew chief) Brian (Husen) leaned into the cockpit right before I pulled my visor down and said, ‘Trust me it is going to go down there this time.’ I knew we were going to be OK.

“I was inside the cockpit just telling this race car to hang in there and get to the finish line. When I crossed the 1000 foot finish line I was screaming inside my car. You would have thought I won the race. It made a beautiful pass straight down the groove and put us No. 3 and we got a bonus point. I feel good going into this weekend but we have two more runs tomorrow and we have a race on Sunday. A run like that on Friday is big but we aren’t done yet. We want to do the same thing two more times tomorrow and go out and win this thing.”

Back in the cockpit of a reconstructed AAA Texas Chevrolet Camaro SS, two-time NHRA Funny Car champion Robert Hight managed a best run of 4.013 seconds at 318.99 mph and finished day one in the No. 7 qualifying position, just ahead of teammate and mentor John Force. It was just the Funny Car point leader’s second lap in a new version of the car destroyed in a massive explosion at the end of a winning final round run two weeks ago in the AAA Insurance Midwest Nationals at St. Louis that left him with a broken collarbone.

“First, I have to thank Tom McKernan from the Auto Club for helping me get right to one of the best doctors on the west coast,” said the defending FallNationals champion. “I was able to get in right away and get my surgery so I could get back to the track. Immediately after the surgery, I felt better. There was never any doubt I would be racing and today was a good day. I don’t feel anymore sore now than I did yesterday.

“It has been a long week and a half,” admitted the 44-time tour winner. “The worst feeling was the slim chance that I could be on the outside looking in. That wouldn’t have been any fun. Until you get in the car and make runs you don’t know how it will all work out. It is nice to get the first day over. We didn’t run the way we wanted to run (but) it is a brand new car and I think we will have better conditions tomorrow. I think you will see this AAA Texas team make some big strides. I honestly believe we will be top four by the time the dust settles.

John Force was just a tick behind Hight at 4.045 seconds at a finish line speed of 319.67 mph, good enough for No. 8 after the first two sessions at a track on which he suffered the worst injuries of his career, broken bones in his hands, legs and feet that forced him to withdraw from the final three races of the 2007 season.

“These were probably the best conditions (we’ll see) unless it gets cloudy tomorrow,” said the 16-time Funny Car Champion. “Our main goal was to get down the racetrack and make clean runs. We did that.

“Robert getting back (in the car) was huge and that motivates everyone,” Force said. “He has the points lead and we wanted to give him a shot at keeping (it). Courtney and I are fighting to chase him down. I’m not done yet. This PEAK Camaro will be ready tomorrow.”

Courtney Force, matching with her sister in a TrueTimber pink camo decked out Advance Auto Parts Chevy Camaro, is currently in the No. 11 spot in Funny Car after dropping cylinders to cross the finish line at 4.080-seconds and 266.58 mph. Off the trailer, Force was on a good pass early but her Chevy Camaro made a move and she had to lift off the throttle down the track.

“We dropped a hole on both runs today and the automatic shut-offs kicked on. We are going to figure out a way to stop that problem and we will be in good shape tomorrow. Tomorrow could be cooler conditions and I am hopeful we can improve,” Force said. “If we have a better race track tomorrow we can make it pretty exciting. We almost made a full pull in Q2 with this Advance Auto Parts team. I am loving that we were able to debut our pink Breast Cancer Awareness Funny Car with our TrueTimber Sassy B Camo. We are looking to go rounds and hopefully get the win. It is also cool to be working with YSC, Young Survivors Coalition, to support people who are fighting cancer who are under 40.”

“We had a good thing going today we just need to get the problem with the dropped cylinders fixed. We have a really positive attitude. We are definitely focused on improving tomorrow and collecting some of those bonus points.”

Qualifying at the AAA Texas NHRA FallNationals continue Saturday with sessions at 2 and 5 p.m. Eliminations are set for 11 a.m. on Sunday at Texas Motorplex.