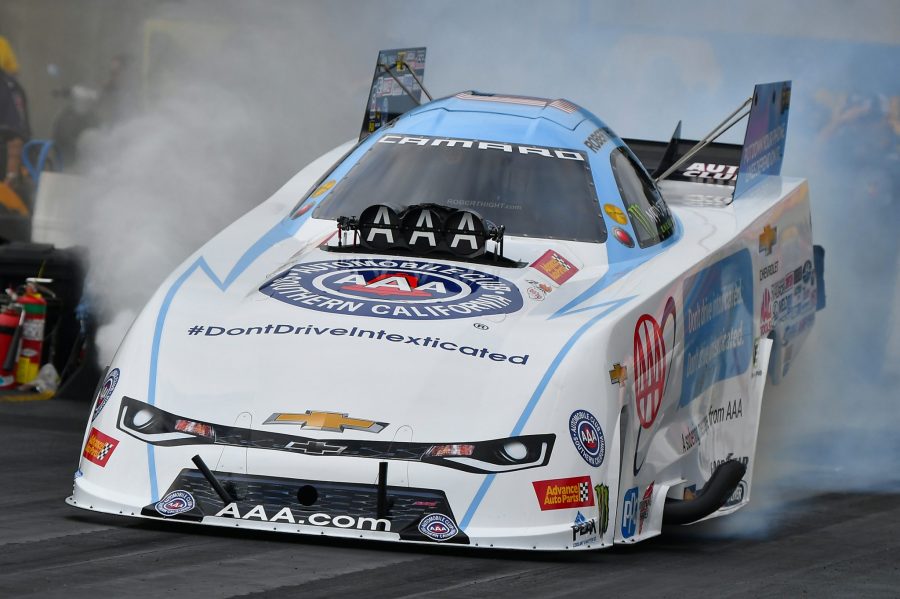 ENNIS, Texas (Oct. 4, 2018) — Two weeks ago Robert Hight and the AAA Texas Chevrolet Camaro took over the Funny Car points lead with a semifinal win over Tommy Johnson Jr. at the AAA Insurance NHRA Midwest Nationals in St Louis. He extended his lead in spectacular fashion outrunning veteran racer Tim Wilkerson in the final for his third win of the season.

As Hight’s 10,000 horsepower Camaro Funny Car was closing in on the finish line, the engine exploded, blew the carbon fiber body sky-high and sent Hight careening into the guard wall. He exited the charred remains of his race car with minimal help from the NHRA Safety Safari and was transported to a local St Louis hospital for evaluation. Later that evening he was back at the track celebrating the win with his team in their pit area.

“I am bummed we didn’t get to do a winner’s circle. My guys did a great job working on my race car all weekend and we had a really quick car getting a lot of bonus points and winning the race. We have the points lead now and our focus is to protect and grow that lead. There are a lot of tough race cars out there and we will have our hands full,” said Hight.

With the points lead, Hight heads to a track where he is the defending event winner and also has some good championship history. In 2009 Hight, who that year started the Countdown from the No. 10, spot won the AAA Texas FallNationals and left the race with the points lead over teammate Ashley Force Hood with only four races remaining in the season. He essentially clinched the championship three races later in Las Vegas.

Last year, Hight won the FallNationals, beating then points leader Ron Capps in the final, to come within 24 points of Capps with two races remaining. Hight clinched his second championship at the final race of the season. In both cases Hight took the momentum from Dallas to a world championship.

“I love racing at the Texas Motorplex. The fans in Texas are awesome and that is a track that was built for low ETs. (Track owner) Billy Meyer used to race Funny Cars and he built us a great all-concrete race track that is amazing. If we get good weather I will be excited to see what kind of ETs and speeds we can run in Dallas,” Hight said.

Hight’s 2018 season began to really pick up speed with his first win of the year in Chicago. Since then he has an additional win in Sonoma and his most recent victory in St. Louis. Throughout the year Hight has touted his partnership with crew chiefs Jimmy Prock and Chris Cunningham as critical to his AAA Texas team’s success.

“My crew chiefs have really done a great job all season. There have been changes to the track prep that threw all the Funny Car teams for a loop but Jimmy and Chris just went to work and figured out a way to give me a really quick and fast race car. I have a ton of confidence. We should have a two-race winning streak right now but I messed up in Reading. I am looking forward to the last four races because I have a great team and an awesome Chevrolet Camaro Funny Car,” said Hight.