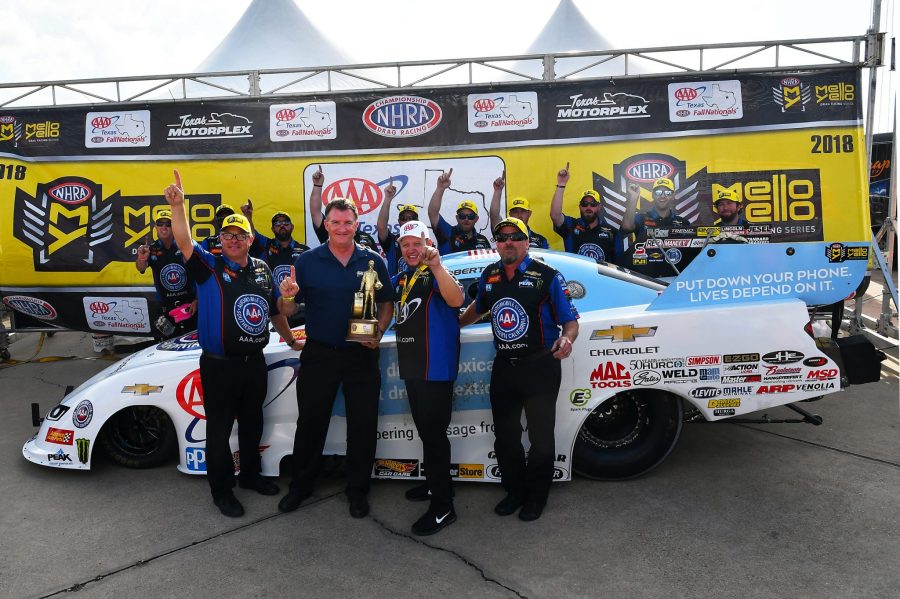 ENNIS, Texas (Oct. 7, 2018) — Reigning Funny Car world champion Robert Hight raced to his 45th career victory, fourth of the season and fourth at the AAA Texas NHRA FallNationals. The victory comes after a fiery win in St. Louis that sent Hight to the hospital with a broken collarbone, on which he had surgery nine days before qualifying at the Texas Motorplex.

The win is something special for several reasons. For one, Hight didn’t get to celebrate the win in St. Louis with his team, who had a busy off weekend building a brand-new car for the champ. Second, both the races in St. Louis and this weekend are AAA sponsored events and Tom McKernan with Auto Club, was instrumental in getting Hight into USC Medical Center to get a second opinion on his injury and in each of his championship seasons (2009, 2017) Hight has had a victory at Texas Motorplex.

“What is really cool is we have won two AAA races in a row. You are winning in front of your sponsors, but I just remember not getting to celebrate a win in St. Louis which was a bummer. I was in the hospital and my team was already back at the trailer thinking about putting everything back together,” Hight explained. “I remember laying there and hearing them say collarbone and eight weeks to get well. I was thinking ‘Oh Man!’ I have the points lead and these opportunities don’t come around that often. I got back to California and Tom McKernan with the Auto Club said he would take me to see some doctors. The first doctor said the same thing, ‘Just let it heal.’ The next doctor at USC said I needed to get it fixed especially considering the line of work I am in. He said I could be back in a couple of weeks. I did everything he said I should do. I went back late on Thursday after over a week of resting. He gave me the clearance and I built an apparatus to keep the shoulder restraints off of my collar bone. The doctor told me I would not have gotten the clearance without the Simpson Racing protection.”

With a titanium plate keeping his collarbone together, the Funny Car points leader entered race day as the No. 6 qualifier facing Jim Campbell in the first round. Hight ran quickest of the session with his 3.942-second pass at 320.05 mph.

“When I crossed the finish line I heard Chris Cunningham on the radio and I thought he said we ran 4.04. I was a little bummed thinking we don’t have lane choice,” Hight said. “A 3.94 is our best run of the weekend. We just kept getting better and better. That was a great job by the AAA Texas team.”

Hight would have lane choice over Tim Wilkerson in the second round. The two-time champion out ran the veteran racer with a 3.954 to Wilkerson’s 3.990. The semi-finals found Hight lined up with rival Bob Tasca III. His solid second-round pass again gave him lane choice.

Hight defeated Tasca handedly running 3.962-seconds at 316.75 mph while Tasca got into trouble mid track and had to get off the throttle. The round win landed Hight in his seventh final round of the season, 71st of his career. No matter the outcome of the race, Hight would leave the weekend with the points lead, but it would be either by 10 or 50 points since his finals opponent was J.R. Todd, who sits second in points.

It was an epic victory for Hight, who let his emotions show at the top end of the race track. Hight and J.R. Todd put on a great side-by-side show but it was the AAA Texas team who prevailed. The end distracted driving schemed Chevy Camaro had a stellar 3.955-second pass at 325.69 mph to Todd’s 3.984 at 319.52.

“That was one of the biggest rounds I have ever raced right there. J.R. Todd is number two in the points and he was 30 behind me going into the final round. Had I lost I would only be ten points ahead which isn’t much. Now, since we won, we have a 50-point lead which is a 40 point swing. I can’t wait to get to the track next week. I am really not sore. I know I have a lot of adrenaline right now. This is an amazing feeling,” Hight said. “It is always a big team effort. This isn’t just about me. We all respect each other. I respect how hard my team worked. They didn’t get a weekend off after St. Louis. We had to build everything. That AAA Camaro was totally ruined after the crash in St. Louis. I was resting and following the doctor’s orders. We all just respect each other and we all know we are working as hard as we can.”

“I made a prediction early on going into the Countdown that I needed to win three races and not have any first round losses. So far so good. We are halfway through the Countdown and we have two wins and a semifinal,” Hight continued. “Fifty points is not a big lead over JR Todd. That car is strong and he is a good driver in a car that has been to two finals in the Countdown. We have to keep pushing all the way to Pomona where it is points and a half. Anything can happen. We have to keep pushing.”

The PEAK Motor Oil and Coolant Chevrolet Camaro rolled into the first round of eliminations with a monster match-up, John Force versus long-time nemesis Ron Capps. Force was giving up lane choice as the lower qualified car but any perceived disadvantage was erased by Force’s will to win and his goal of keeping his championship hopes alive.

Both Funny Cars left the starting line together and while Force was slightly behind for the first 300 feet by half-track the legendary driver was pulling away for the first-round victory with a winning elapsed time of 3.986 to Capps’ slower 4.024. The win was the 16-time champion’s 58 round win over Capps and propelled Force to a second-round race with Bob Tasca III.

“I have had a couple big round wins in the Countdown. I got a big round win in Reading over (Matt) Hagan and a big win over (Jack) Beckman in St. Louis. It ain’t no good to win one round even if you are against the best out there. I got another big win today against Capps in the first round but we could get past the second round.”

In the second round, as the race cars inched into the staging beams some gamesmanship ensued as both 10,000 horse-powered Funny Cars stopped just short of fully staging. Eventually both drivers staged and while Force cut an impressive .039 reaction time Tasca’s near-psychic .007 was enough of a guess to give the non-Countdown qualified driver a slim margin of victory at the finish line. Force posted a decent 4.000 second run at 325.77 in the heat and will head to Charlotte with three races left to secure unprecedented 17th Mello Yello Funny Car world championship.

“I still have a shot. I thought I had moved up more in the points but there are a bunch of us grouped together. We missed it in qualifying. If I would have started in the top half who knows what could have happened today. That is part of the game,” Force said. “I live for winning. I want to be liked for winning now. I have my work cut out for me. I am up against young guns but I am holding my own. I have learned how to work around any problem.”

After a solid qualifying effort, Brittany Force and her TrueTimber pink camo decked out Advance Auto Parts Monster Energy dragster team made a stout 3.762-second pass at 330.07 mph to defeat Scott Palmer in the first round of the FallNationals. The speed stood up as quickest of the entire event.

Force will remain ninth at the midway point of the NHRA Countdown to the Championship but their first round pass combined with two solid qualifying passes, gave the team, who spent the off weekend front halving their dragster, some added confidence heading into the second half of the Countdown.

“Overall big improvements for our Advance Auto Parts team. We qualified No. 5 and we made three good runs. Even with those adjustments we are still trying to figure this car out. I think we will be looking good in Charlotte. We will have cooler conditions and I have a lot of confidence,” Force said.

“People have asked me if I am frustrated and my answer is no because we are all one team. I know the work that these Advance Auto Parts crew guys and my crew chiefs are putting into this race car. It just isn’t turning out the way we want it to right now,” Force continued. “With the right attitude and hard work we can turn our performance around. There are three races left so we have three chances to get wins. That is our goal pick up more wins before the end of the season.”

Courtney Force will head to the NHRA Carolina Nationals at zMAX Dragway in Charlotte fifth in the points standings after an early exit at the AAA Texas NHRA FallNationals. The Advance Auto Parts team, wearing the TrueTimber pink camo in recognition of Breast Cancer Awareness month, had their best run of the weekend in the first round. They laid down a 3.985-second pass at 318.17 mph after the team battled down to the wire in order to fix a mechanical problem. It was an unlucky matchup as Jack Beckman raced to 3.969-seconds at 317.27 mph.

“I don’t believe our championship chances are over by any means. I actually feel pretty good our Advance Auto Parts TrueTimber Camaro was able to get down the track in the heat. We made our best run when it mattered the most,” Force said. “It was one of the quickest runs of the first round unfortunately we were matched up against someone that ran a little better. We had to battle some issues in qualifying and we didn’t qualify where we wanted to. We will go to Charlotte and hopefully turn our luck around. We still have a shot at this championship we just have to keep our focus.”

“I am really proud of this Advance Auto Parts team. They have been working incredibly hard. No one is hanging their heads over here. We had a great regular season and I think we can definitely finish strong over the next three races.”

“We came into the Countdown number one. We just have to find our stride over the next three races. We have to track down these gremlins,” Corradi explained. “We can’t keep scuffing pistons. We would have won that race if we wouldn’t have scuffed a piston. We know what the problem is and we are going to get it fixed. I am glad we will be racing next weekend.”

The Countdown to the Championship continues with the NHRA Carolina Nationals at zMAX Dragway on Oct. 12-14.