COURTNEY FORCE TAKES OVER THE NO. 1 QUALIFIER LEADING INTO SUNDAY ELIMINATIONS AT THE STRIP AT LAS VEGAS MOTOR SPEEDWAY 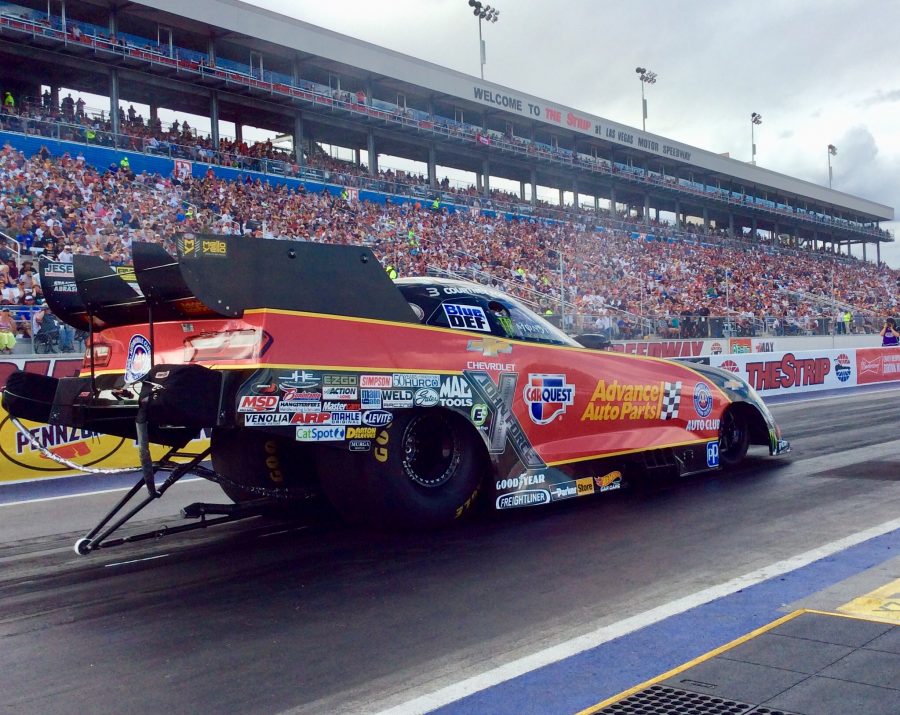 Courtney Force stole the No. 1 qualifier on her final pass of the last qualifying session with a 3.927-second pass at 326.40 mph. This is her second consecutive No. 1 qualifier at the spring event at The Strip, her second No. 1 of the season and the 19th of her career.

“We have had some decent passes throughout qualifying. We had a little bit of trouble keeping it running on all eight cylinders. In Q3 we had a hole out at about half track so you have to get out of it early and you lose out on that run,” Force explained. “I said to my crew chiefs hopefully we can keep it on all eight cylinders and get down there for a pretty good pass. We were looking at our incrementals and we knew it would run solid if we could just get it there. This is a track that sometimes can be a nightmare for crew chiefs but they can also sometimes flex their muscles. For Brian Corradi and Dan Hood to come out and throw down on that last pass is pretty awesome. We have CarQuest on my Advance Auto Parts Camaro this weekend too and this is a great start for all our sponsors. It feels good going into race day in that top spot. Hopefully we can repeat what we did in Phoenix when we had the No. 1 and went on to win the race. That is what we are going to try and do tomorrow.”

Brittany Force piloted her Monster Energy dragster to a 3.773 pass at 322.58 in the third qualifying session to qualify No. 3.

“I feel confident going into our first Vegas four-wide. Our team qualified No. 3 and we had some amazing passes. We will be ready to get after it tomorrow,” said Force, who won the Charlotte Four-Wide in 2016 and was the first female four-wide winner in history. “We have won in Charlotte before and that just puts more confidence behind us. We did it once and we want to do it again. Our team has accomplished a lot. We won the championship last year. We were the first female to win a four-wide race. We want another first, we want to be the first to win the Four-Wide here in Las Vegas and we want it this weekend.”

In the first round, Force will line up against No. 6 qualifier Doug Kalitta, No. 11 qualifier Richie Crampton and No. 14 qualifier Terry Haddock. After her crash at the season opening Winternationals, Force is ready to go after her first win of the season.

“I definitely feel back in my groove. Looking back at Pomona, all of that is definitely behind us. In Phoenix I think I carried it over. Phoenix wasn’t about winning it was about getting back in the car. After Phoenix going into Gainesville and now Las Vegas that competition attitude is back,” Force said.

Qualified in the fifth position after a 3.963 pass at 321.42, Robert Hight and his Auto Club of Southern California Chevrolet Camaro SS Funny Car team are confident heading into Sunday eliminations.

“We got off to a good start and then we kind of struggled. I have the best guys over here and they will get it right. In looking at the ladder for tomorrow I really like the way it looks. All you have to do the first two rounds is be one of the two quickest race cars which isn’t how we race,” Hight said. “We are going to go up there and try and be quick every run. I think tomorrow is a good day to win my third four-wide race.”

Hight’s first round of competition will be against No. 4 qualifier Ron Capps, No. 12 qualifier Gary Densham and No. 13 qualifier Jack Beckman.

John Force, in the 11th position after his 4.018 pass at 314.39, is taking things one step at a time in his PEAK Coolant and Motor Oil Chevrolet Camaro SS that is branded with BOSS Shops and Plueger-Gyger this weekend.

“We are taking baby steps down the race track. I had a little problem in the third session so we only put it down to half-track in the fourth session. We think we are on to something. Courtney getting low ET with Advance Auto Parts was big for us with Robert being right there,” Force said. “We are going to get after it tomorrow. Our strategy is going to be to go out and try and win. That is our strategy every race.”

In the lanes with Force during the first round will be No. 3 qualifier J.R. Todd, No. 6 qualifier Bob Tasca and No. 14 qualifier Shawn Langdon.

Eliminations at the Denso Spark Plugs NHRA Four-Wide Nationals will begin at noon at The Strip at Las Vegas Motor Speedway.