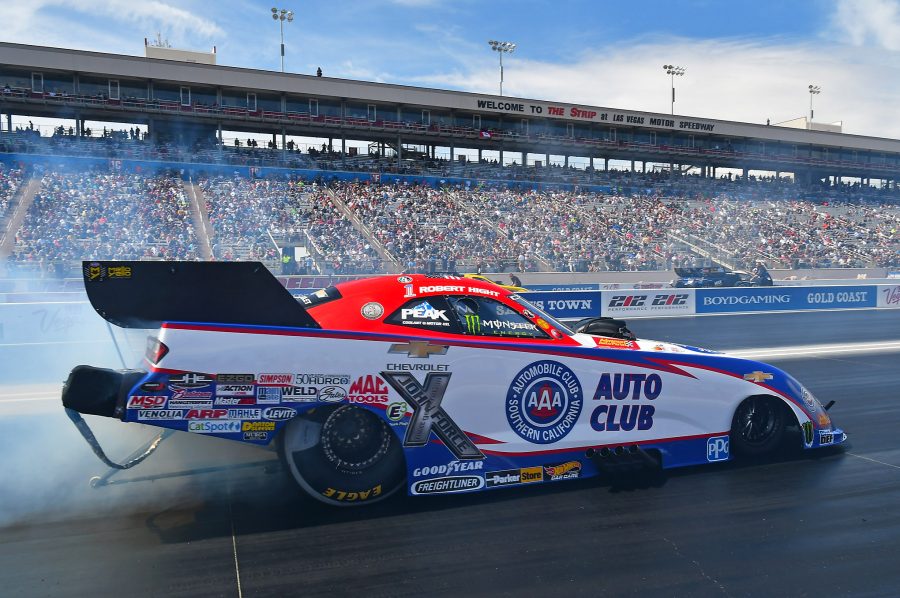 After a successful testing session at Auto Club Famoso Raceway in Bakersfield, Calif. on Wednesday, team leaders John Force and Hight believed they have solved the issues plaguing the Funny Car class during the opening races of the season. Their hard work paid off and showed on Friday night at the fourth of 24 events on the NHRA Mello Yello Drag Racing Series schedule.

“It is a good day when John and I can go back to the pits with the bodies on the cars,” Hight said. “We did some testing in Bakersfield on Wednesday. We each made three runs and we left there with a lot of confidence. We believed we figured our problem out. John went down the track twice with two good runs and obviously our first run today gives us a lot of confidence. We’ll get two good runs tomorrow and we really believe we have this behind us and we can focus on racing.”

“We won both the championships last year and to come out here and have this kind of start for the first three races is disheartening. We know the drill. The brain trust worked on it and we think we found the problem and it showed today. All the cars had the same problem and it just jumped around,” added 16-time champion Force.

Hight and his Auto Club of Southern California Chevrolet Camaro powered to a 3.963-second pass at 321.42 mph during the first qualifying session. It held up through round two, despite his smoked tires, putting him in position to secure his fourth No. 1 qualifier at the spring event at The Strip.

“This was pretty amazing to come out here on a green race track in the hottest part of the day and get that No. 1 spot in Funny Car. I was a little bit surprised no one stepped up tonight and took it away. We were trying to run quicker but obviously it shook the tires in round two,” Hight said. “Everybody at Las Vegas Motor Speedway worked their tails off over the winter to get this job done. It was fun to watch on Facebook the daily progress they were showing. At some point I was thinking I don’t know if they are going to get this done but they came in ahead of schedule and they did an amazing job. Great job to everyone here. It is a great race track. I believe we will have a sell out tomorrow and it will be a lot of fun.”

Courtney Force jumped into the No. 4 position after her 4.005 pass at 313.00 in the second qualifying session. Force had trouble in the first round of qualifying and wasn’t qualified until her second go at the new west-coast, four-wide track.

“It is great to be out here at the Four-Wide in Las Vegas. This is an amazing track built by Bruton Smith. He did an amazing job turning this from a two lane track into four-wide. It is great to give the fans on the west coast the chance to watch some four-wide racing,” Force said. “We went up there with our Advance Auto Parts Camaro and we had a malfunction in Q1. Our automatic shutoff shut off the car as soon as I hit the throttle. We lost that first run. We made up for it when we came up in Q2 and laid down a four flat to put us in the No. 4 spot. I am really proud of my guys. We had an even better run under our belts because it dropped a hole down track. We are really excited to see what we can do tomorrow.”

John Force and the PEAK Coolant and Motor Oil Chevy Camaro, branded with BOSS Shop for this weekend, had two clean passes down The Strip to land them in the No. 6 position. Force, who also has a tribute to the late Steve Plueger, who passed away two weeks ago, on his race car, ran a 4.018 at 314.39 during the second round of qualifying.

“Really excited to race the four wide in Las Vegas. You have to hand it to Bruton, it’s a great race track. I have Plueger and Geiger on the side of my race car. We lost Steve a while ago and he was a great crew chief and chassis builder. Just a great guy,” Force said. “We are going to be okay. We are going to try and get faster. With all that we have been through we are still learning so we are going to try and go A to B.”

Defending Top Fuel world champion Brittany Force is currently sitting in the seventh spot with her 3.846 pass at 301.60 from the first qualifying session.

“We will be ready for tomorrow. We ended up No. 7 and its four-wide which is a whole new ball game out here. You only get one run in each lane so that makes it a little bit of a challenge. Everybody is in the same boat and we get two more runs tomorrow. I think that will get us ready for race day,” Force said. “I love Vegas. This is almost like a home track for me. Now that they have made it a four wide it is really exciting. The stands are packed and the fans are excited about it. We want to get our first win of the season here.”

Qualifying at the Denso Spark Plugs NHRA Four-Wide Nationals continues Saturday at 12:30 and 3 p.m. with eliminations scheduled for Sunday at noon.