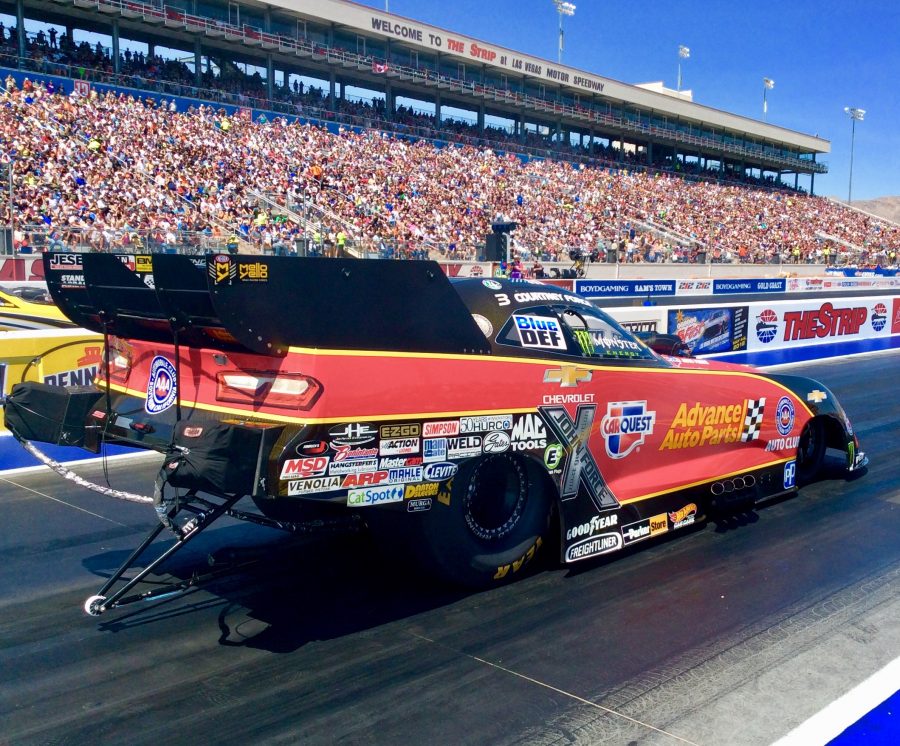 Courtney Force, starting the day from the No. 1 qualifying position, had the best time of her first-round quad with a 3.967-second pass at 317.87 mph and was second quickest in the second round with her 4.126 pass at 298.67. In the final quad, Force and her Advance Auto Parts Camaro had a 4.007-second pass at 300.53 that was third to race winner J.R. Todd and runner-up Jack Beckman.

“It was a great day for our Advance Auto Parts team with CarQuest onboard we got this Chevrolet Camaro all the way to the last quad of the day,” Force said. “We picked up a lot of points and made it all the way to the semifinals. This was a great outing for the first Four-Wide in Las Vegas. We had a good race car that qualified No. 1. We dropped a hole in the second round today and that slowed us down which we gave up lane choice in the final quad. We dropped a hole in the final and I think we will get that corrected before we get to Houston. This is a great team and I think overall we had a great weekend.”

Force is second in the Funny Car points standings after the semifinal finish.

The weekend came to a close during the second round of eliminations for 16-time world champion John Force. He powered his BOSS Shops branded PEAK Coolant and Motor Oil Chevy Camaro SS to a 4.050 pass at 315.34, only missing out on a trip to the finals by 0.015 seconds of reaction time.

“Bottom line we are finding our problems. We didn’t get the wins in Top Fuel or Funny Car but Courtney was close. I feel confident with this team,” said Force, who moves up to 11th in the points standings, just 18 points out of the top 10. “It was great to have Boss Shop on this PEAK Camaro this weekend. Bruton Smith had a great crowd our here all weekend and we put on a good show for the fans. I am going to get with my team and we will do some testing tomorrow. For all my sponsors from Auto Club to Chevrolet to Monster to PEAK and Advance Auto Parts we are going to keep fighting.”

Brittany Force, the No. 3 qualifier of the event, had a first round exit after her Monster Energy dragster smoked the tires and she pedaled to a 4.690 pass at 175.52. Force was bettered by Doug Kalitta’s 3.819 and Richie Crampton’s 3.832.

“It’s tough. Our team is looking for its first win of the season and it would have been great to accomplish that here at the inaugural Las Vegas Four-Wide Nationals,” Force said. “It would have been cool to be the first Top Fuel team to do that. We had some good qualifying passes and we ended up No. 3. We went up there in lane 2 and it blew the tires off the Monster Energy Top Fuel dragster and I tried to pedal it. There were too many cars out in front of me so we had to let it go. We will regroup and head to Houston in another week.”

After her crash in Pomona that landed her an overnight hospital stay, Force has all but put the nightmare of pedaling the race car behind her and turned the incident into a learning experience that she was able to practice during her efforts on Sunday.

“That pedal definitely took me back to Pomona. It is race day. It is game on and we are looking for a win. What happened in Pomona is behind us and we are ready to fight it out for that first win of the season. When it wasn’t running smooth down there and it smoked the tires you have to pull your foot out of it and make sure you let it settle. That is the one thing I learned coming out of Pomona. You have to make sure the car is completely settled. I got back on it and it started to go. I think it was a good pedal job on my end but it wasn’t enough to turn on a win light,” added Force who remains ninth in points.

Robert Hight ended his weekend when his Auto Club of Southern California Chevrolet Camaro SS Funny Car crossed the finish line with a 6.165 pass at 109.93 after it got into to trouble at half-track.

“That wasn’t the way we wanted to start our race day. We had some troubles throughout qualifying. We started strong with a great first run and then couldn’t find consistency,” Hight said. “This Auto Club team will get it figured out. We tested before this race and we’ll test tomorrow. I feel good about our chances to get some momentum for Houston and the next four-wide in Charlotte. The crowd the last two days here in Las Vegas was amazing. I have a lot of confidence in this Auto Club team.”