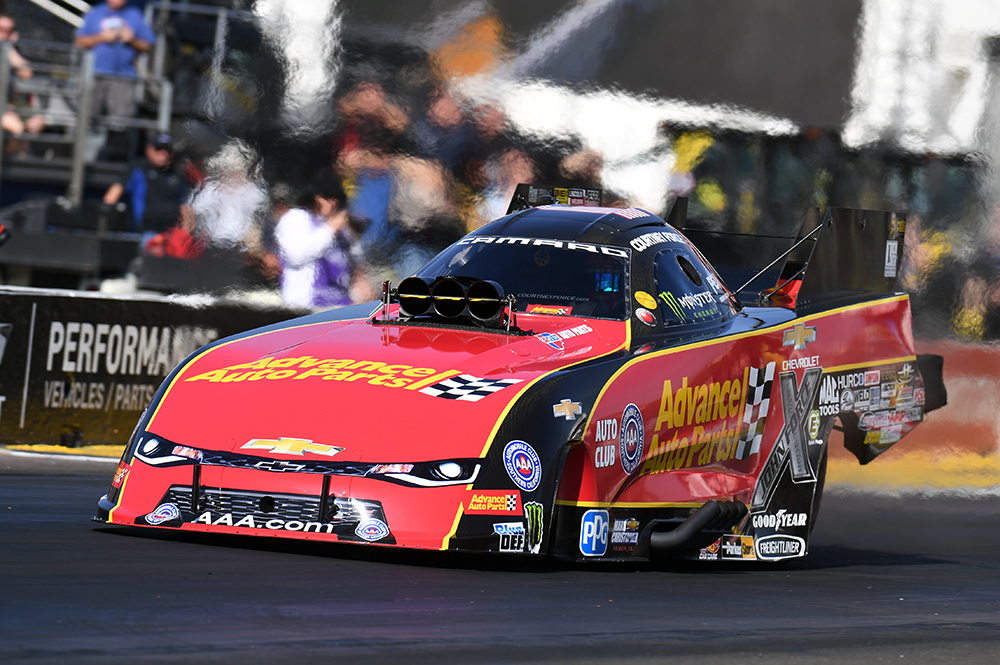 LAS VEGAS (April 4, 2018) — Courtney Force and her Advance Auto Parts team are looking to continue the consistency they’ve had in the first three races of the season as they head into the Denso Spark Plugs NHRA Four-Wide Nationals at The Strip at Las Vegas Motor Speedway on April 6-8.

Force is sitting third in points after a win and No. 1 qualifier at the NRHA Arizona Nationals and a strong showing in qualifying at the NHRA Gatornationals in Gainesville, Fla. where she also defeated her father, 16-time champion John Force, in the first round. The winningest female driver in NHRA Funny Car history is prepared to be back in her Chevy Camaro at the inaugural west coast, four-wide race.

“Bruton Smith does a phenomenal job with his race tracks. To redesign Las Vegas as a four-wide track is going to be unbelievable for the fans,” Force said. “It will be a great show. There will be a lot going on during qualifying and race day. Our Advance Auto Parts team is going to be ready for it.”

Although she is racing for her first win at The Strip, Force has reached the finals four times, once at the spring event, and has had a No. 1 qualifier two of the last four years including last year’s Denso Spark Plug NHRA Nationals.

“It mixes things up a little bit. It will be strange to see the new (four-wide) design but I know my team will be able to get a handle on it and get our first four-wide win,” Force said. “We are coming into Vegas focused on getting another win this season. There is always a huge crowd there. It will be great to be back.”

Fans will have an opportunity to meet Force along with her other teammates at the NHRA FanFest hosted at the New York, New York Hotel and Casino on the Brooklyn Bridge Plaza on Thursday from 6-8 p.m. Drivers will be signing autographs from 7-8 p.m.