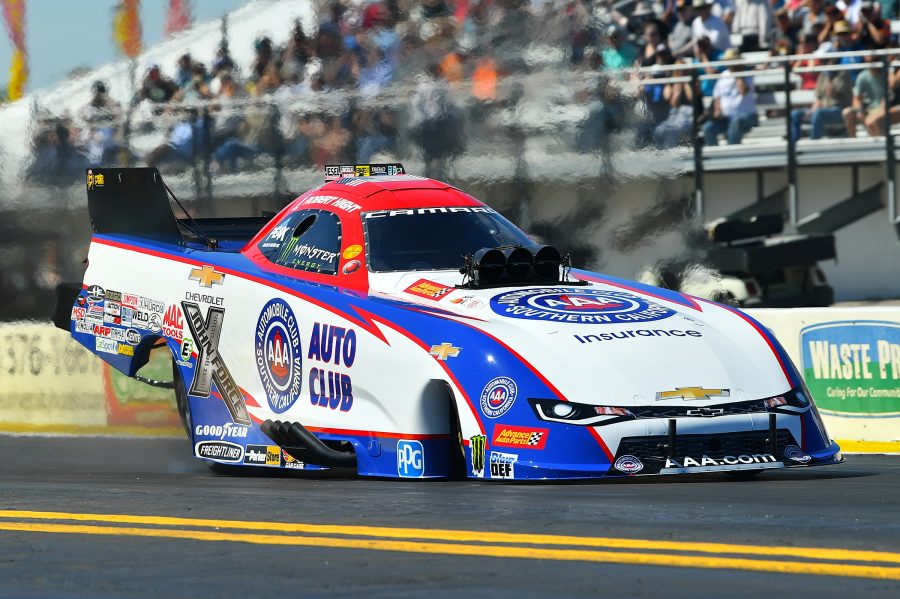 LAS VEGAS (April 4, 2018) — Robert Hight and his Auto Club of Southern California Chevrolet Camaro Funny Car are looking forward to the challenge of a four-wide format at the Denso Spark Plugs NHRA Four-Wide Nationals at The Strip at Las Vegas Motor Speedway.

Hight, the two-time and reigning world champion, has a total of five wins and seven No. 1 qualifiers at The Strip, including three wins and four No. 1s at the spring event. With two wins at the Charlotte Four-Wide event, Hight is prepared to become the first Funny Car driver to win a race in the unique format at two different tracks.

“I am looking forward to getting to Las Vegas for the Four-Wide Nationals. Bring it on. The Las Vegas track is great and I am sure the lanes will be in great shape,” Hight said. “I have had success in the four-wide format. I don’t change my routine. You just have to race your own race and try and be one of the first two race cars to the finish line. In that last round on Sunday I want to be the first one across the stripe.”

With a runner-up finish to open the season and a pair of No. 2 qualifiers, Hight has had a consistent race car. At the NHRA Gatornationals, the most recent event in Gainesville, Fla., Hight left the weekend with low E.T. and top speed of the entire weekend. His weekend best E.T. came in the first round of eliminations before he made a spectacular second round exit to Matt Hagan. Both Hight and Hagan blew the bodies off their Funny Cars within a second of each other before crossing the finish line with nearly identical times.

Hight, now fourth in the Funny Car points standings, will head to The Strip ready to go rounds and pick up his first win of the season.

Fans will have an opportunity to meet Hight along with his other teammates at the NHRA FanFest hosted at the New York, New York Hotel and Casino on the Brooklyn Bridge Plaza on Thursday from 6-8 p.m. Drivers will be signing autographs from 7-8 p.m.