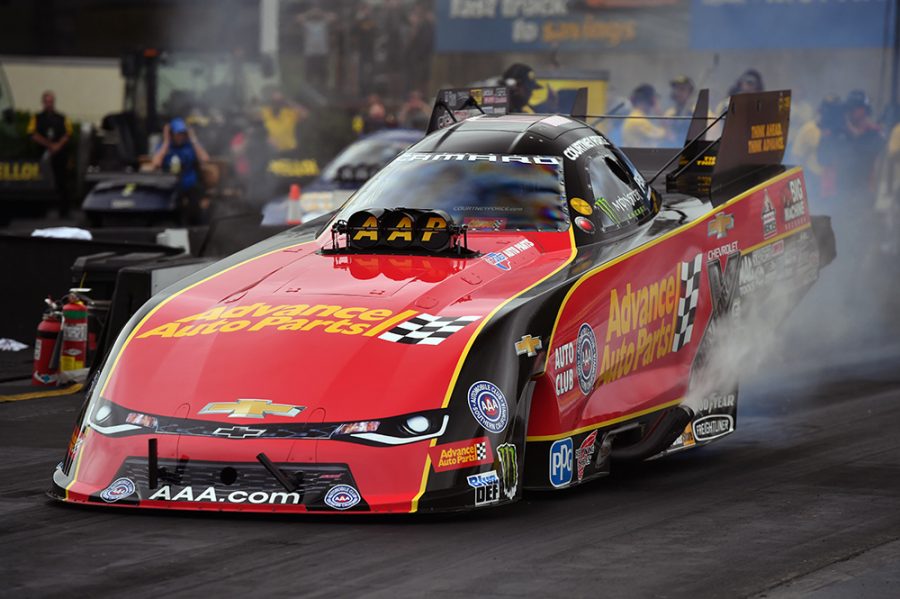 READING, Pa. (Sept. 14, 2018) — Courtney Force and her Advance Auto Parts team continued their regular season success into the Dodge NHRA Nationals, the first of six races in the NHRA Mello Yello Countdown to the Championship, by racing to the top of the qualifying board Friday at Maple Grove Raceway. John Force currently holds the No. 7 position while Robert Hight and Brittany Force will both continue qualifying from the No. 10 spot.

Force started the day with an early shutoff during the first qualifying session, coasting to 7.752 seconds at 84.20 mph. With the data from the first run and the better than expected track conditions, the Advance Auto Parts team came back in Q2 and ran a stout 3.907-seconds at 323.27 mph despite throwing the rods out.

“On the first run we shook pretty hard and had to get off the throttle. We changed some things around and we thought we would be ready for the second qualifying session. We went for it in Q2 and obviously the conditions were great out there with the cloud cover. I was excited when we were pulling up there and I could see the look on Brian Corradi’s and Dan Hood’s faces, I knew we were going to go for it,” explained Force. “It felt awesome. It is amazing to be able to pick up some of those bonus points. That was our plan coming into today and we were able to do it on that second pass.

“I think every team knows in Q2 that, no matter what track you are at, you shoot for the moon. That is usually the best time to run but tomorrow we are running at the same times so who knows what can happen. That just means we will have to keep improving on the 3.90 we put on the board,” continued Force.

In the first qualifying session, John Force shutoff early but was still able to put up at 4.064-second pass at 269.67 mph to put him seventh. He held onto the qualifying position when he powered his PEAK Coolant and Motor Oil Chevy Camaro to a 3.953-second pass at 331.12 mph, the fastest pass of the event so far.

“We’re keeping our heads down and working hard. We went A to B and she was good to us in that second session,” Force said. “Now we just need to keep it consistent. Tomorrow conditions will be similar because we run at the same times but it’s a new day. The PEAK team with Ronnie Thompson and Jon Schaffer we’re out here to win, and that’s what we’re going to keep trying to do.”

Robert Hight was third quickest in the first qualifying session when his End Distracted Driving schemed Auto Club of Southern California Chevy Camaro crossed the line at 3.981-seconds and 320.81 mph. The team didn’t have a chance to improve in the second session as they ran into trouble early and had to shut off, lighting up the scoreboard with a 4.033-second run at 267.91 mph and landing No. 10.

“We looked good on that first run and we were ready to get after it in Q2 but we put a piston out early and had to shut it off,” Hight said. “We’ll be better tomorrow. (Crew chief) Jimmy Prock thinks we’ll make a big jump. Luckily conditions won’t be much different and we’ll have a real chance of getting into the top of the qualifying.”

Brittany Force and her Advance Auto Parts team looked good off the trailer when they raced to a 3.812-second run at 324.51 mph to earn an early No. 7 spot. The second qualifying session was eventful for the defending event winner when there was a malfunction with the timing system forcing Richie Crampton, who was in the other lane, and Force to shut off their dragsters. Left with the options to go ahead and make the run or go to the back of the line, the Advance Auto Parts team pushed back to wait while Crampton ran. The result wasn’t what either team hoped for as they both smoked the tires almost immediately. Force and her Advance team will look to improve from the No. 10 spot on Saturday.

“We got off to a good start in Q1 when we went straight down the racetrack. We put a 3.81 on the board and we are happy with that run,” said Force. “On the second run I think we were trying to push it a little too hard. It blew the tires off right at the hit of the throttle. I know our Advance Auto Parts team will be taking all that info into tomorrow. We are going to run at the same times and I know we are going to try and run better. We want to move up in qualifying and then go out and win the race.

“I don’t know if waiting affected our run. You can look at it either way. If we made an excellent run you could say it helped. It was tough because we were up there ready to go and you are just sitting and sitting. It is just racing you have to just roll with it. It happened to Crampton too.”

Qualifying at the Dodge NHRA Nationals will continue Saturday at 2 and 5 p.m. at Maple Grove Raceway with eliminations slated for Sunday at 11 a.m.