COURTNEY FORCE AND ADVANCE AUTO PARTS NO. 1 FOR ELEVENTH TIME 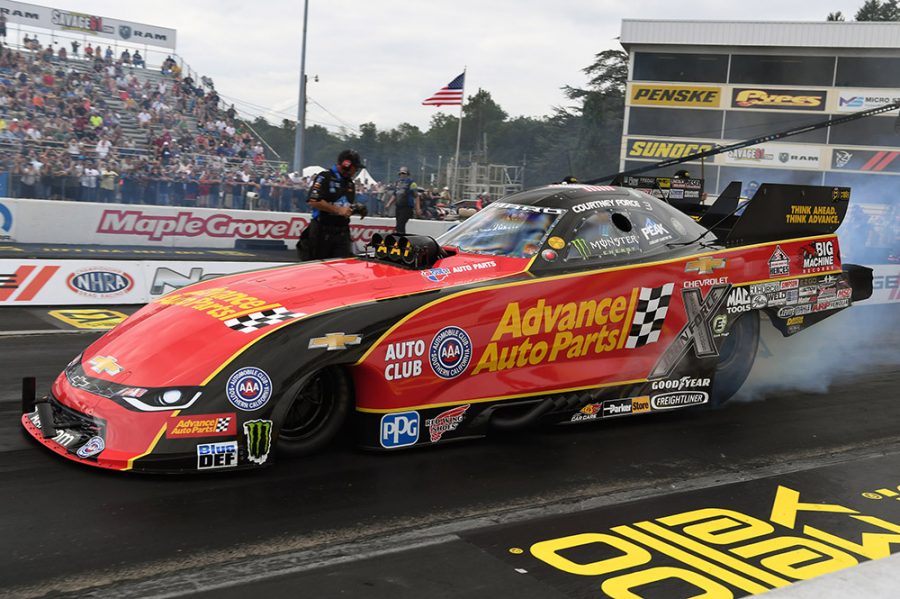 READING, Pa. (Sept. 15, 2018) — Courtney Force and her Advance Auto Parts team earned their 11th No. 1 qualifier of the season Saturday at the Dodge NHRA Nationals at Maple Grove Raceway. The 11 top spots for the championship caliber team is the third most in the Funny Car category behind Cruz Pedregon’s 12 in 1998 and John Force’s 13 in 1996 and is the most No. 1s by anyone since Mike Edwards’ 16 in Pro Stock in 2009 and the most by a Funny Car driver since 2000 when John Force had 11.

The red, black and yellow Chevy Camaro opened up Saturday qualifying with a 4.125-second pass after smoking the tires down track. During the final qualifying session, Force and the Advance Auto Parts team went straight down the strip to run 3.977-seconds at 323.12 mph. Their 3.907-second pass at 323.27 mph from Friday night secured them the No. 1 spot going into race day where they’ll face Mike Smith, a new opponent for the team, in the first round. This is the 28th No. 1 qualifier of Force’s career and first at Maple Grove Raceway.

“It’s exactly how we wanted to start things off. Coming into race one of the Countdown to the Championship, our goal was to try and get those bonus points and stay ahead. We were able to do that last night when we went to the top spot with that 3.90,” said Force, who will be racing for his first win at Maple Grove. “Coming out here today and running a 3.97 in that last session, it was pretty good. I had my hands full downtrack, but we were able to get it down there.

“To be able to finish off qualifying and go into the first race of the Countdown as the No. 1 qualifier feels pretty great for my Advance Auto Parts team. Brian Corradi and Dan Hood have really got this car dialed in,” continued Force. “I obviously would have loved to have four consistent runs down the track, but I still feel like we have a great handle on the car and that gives our entire team a lot of confidence going into race day tomorrow.”

John Force and his PEAK Coolant and Motor Oil team started Saturday off with a 4.007-second pass that earned them one bonus point for being third quickest in the session. Despite the bonus point, Force was bumped from seventh to eighth. A solid 3.945-second run at 328.86 mph to close out qualifying jumped the 16-time champion and seven-time Maple Grove winner back up to the No. 7 spot. The position lands him a first-round match-up with two-time champion Matt Hagan. Force has a 21-17 advantage over the young driver and last beat Hagan en route to his win at the Mile-High Nationals in Denver.

“My PEAK Coolant and Motor Oil Camaro made four runs in a row and qualified seventh,” Force said. “I’ve got a tough competitor in Hagan but, even if he gets me, I know I’ve got a car that can race in the Countdown.”

Defending Top Fuel world champion Brittany Force will start race day from the No. 11 position off the efforts of her 3.802-second pass at 326.63 mph from the third qualifying session. Force closed out the day with another bout of bad luck — a timing system malfunction occurred during her Q2 run on Friday — when a blower belt pulley came off her Advance Auto Parts dragster.

“We struggled with luck this weekend. Q2 yesterday, the tree didn’t activate and it definitely effected our run. Then today a blower pulley came off our car. It was on a killer run, too,” explained Force who won this event last year. “So, we’ll have to take the two good runs that we had and make them work for tomorrow. Tomorrow’s a whole new day. This Advance Auto Parts Monster Energy team, we’re going to get back in the winner’s circle. We won here last year. We’re getting ready to move eighth all the way back up to one, like we did last year. We’ve got a lot of work to do before tomorrow but I know this team will figure it out.”

Force will race Antron Brown in the first round of eliminations tomorrow. The pair have met at the two previous events at Maple Grove, Brown beat Force in the 2016 final and Force beat Brown in the semifinals en route to her 2017 win.

Robert Hight and the Auto Club of Southern California team had their own dealings with bad luck throughout qualifying. After running third quickest during the first session with a 3.981-second pass at 320.81 mph, the Auto Club team didn’t have another clean run down the track. In the second session they ran into trouble early and had to shut off, Saturday afternoon a cylinder went out early and in the evening during the final session, Hight shook the tires early.

“We’ve struggled in qualifying before and put it together for race day. Both our wins this season we qualified low, we were 12th in Chicago and 11th in Sonoma,” Hight said. “Jimmy Prock and Chris Cunningham know what these machines need. We’ll be ready for tomorrow. Qualifying wasn’t what we wanted but it’s something we can learn from.”

Hight’s first round opponent will be Shawn Langdon. They’ve faced each other once before with Hight taking the win.

Eliminations at the Dodge NHRA Nationals will begin Sunday at 11 a.m. Television coverage of the event begins at 7 p.m. E.T. on FS1.