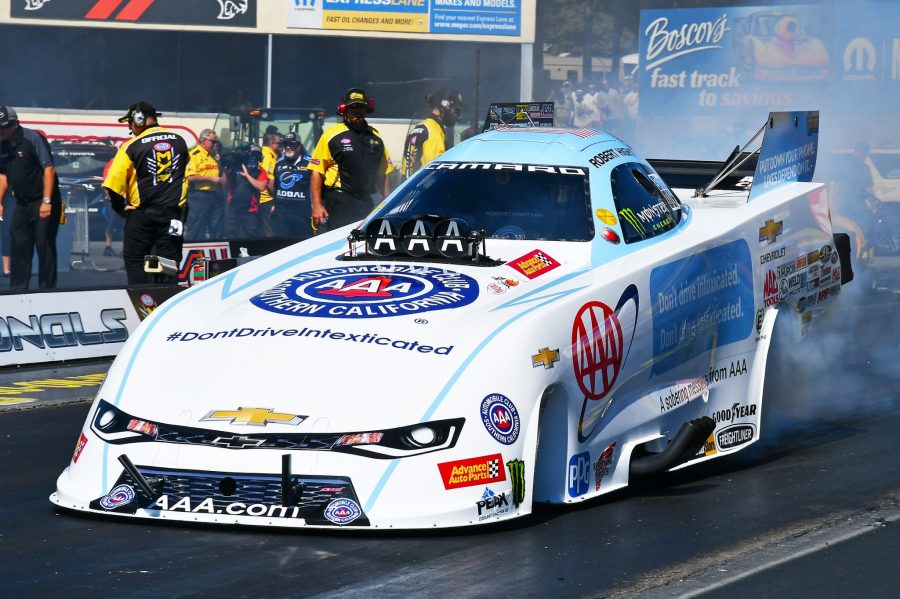 RREADING, Pa. (Sept. 16, 2018) — Robert Hight and the Auto Club of Southern California team led the four-car fleet of John Force Racing with a quarterfinal finish at the Dodge NHRA Nationals that moved them into second in the NHRA Mello Yello points standings with five races left in the Countdown to the Championship. John Force raced to the second round and found more consistency with his PEAK Coolant and Motor Oil Chevy and the Advance Auto Parts machines of Brittany and Courtney Force both had early exits at Maple Grove on Sunday.

Hight and his Chevrolet Camaro were consistent throughout race day, a welcomed change from an inconsistent two days of qualifying where the team secured the No. 11 starting position with a 3.981-second pass during the first session, their only clean run of qualifying. Lining up against Shawn Langdon in the first round, Hight is now 2-0 against the Top Fuel turned Funny Car pilot after putting down a 3.941-second pass at 325.53 mph. Langdon only had a 4.015 pass.

“Obviously this is not the way we wanted to end the weekend. I had been cutting good lights all day and was just too aggressive,” Hight said. “This Auto Club Camaro is running great, and we would have had that round win and probably won the race. Jimmy Prock and Chris Cunningham figured this car out from qualifying. Turning it around like that gives me all the more confidence in this Auto Club team. I believe we have the car to beat. We’re ready to head to St. Louis, we moved up in the points and we’re going to keep it going.”

“I was really hoping to get this End Distracted Driving Auto Club Camaro into the winner’s circle this weekend. That didn’t happen but the response from the fans has been amazing. I got so many comments about the car this weekend and had fans telling me it was a great campaign. Hopefully next weekend we get the job done,” added Hight.

Sixteen-time champion John Force did his Funny Car teammates a favor with his first-round win over two-time champion Matt Hagan. Force powered his PEAK Coolant and Motor Oil Chevy Camaro to 4.007-seconds at 326.87 mph while Hagan slowed at half track and crossed the line at 4.165-seconds at 257.97. The first-round loss dropped Hagan from second to fifth in the points standings, behind both Hight and Courtney. Force continued his weekend long consistency with a 4.093-second pass at 317.49 mph in the second round but it wasn’t enough for Tim Wilkerson’s 4.005 at 321.73 mph.

“In qualifying we made four runs in a row. We had been really struggling to get four or five runs in a row. We did it at Denver, but that was a completely different combination that we ran. So, to come here and make four good qualifying runs and win first round over a champion Hagan, it makes you feel good,” Force said. “What I have to look at is the consistency. Even when I got beat by Wilkerson, my car still went A to B, and that was six runs. I haven’t done that in a while.”

The event No. 1 qualifier, Courtney Force and her Advance Auto Parts Chevy Camaro had an irregular race day, losing in the first round to Mike Smith. Force had issues down track, had to pedal her hot rod and crossed the line at 5.069-seconds at 158.71 mph. Smith ran 4.398-seconds at 227.15 mph after running into some trouble of his own.

“We were able to gather a few points throughout qualifying and a few more coming into race day in the No. 1 position. Our team was ready to go. Unfortunately, our car wasn’t happy down track. I ended up trying to pedal it to try to get it down there and it wouldn’t hook up and my opponent went on for the win,” Force said. “That’s not the run that we were obviously looking to make. We are a little disappointed in ourselves, but we’ll take our focus to the next race. This is only Race 1 of the Countdown to the Championship. We’ve fallen just a couple spots but we know we’re still in a spot where we can make things happen and turn things around at the next race. We’re staying positive and turning our focus to St. Louis to really make it happen.”

Force is now third in the points standings, ending her streak of 12 races in the No. 1 spot.

Reigning Top Fuel world champion Brittany Force and her Advance Auto Parts dragster battled with some bad luck all weekend at Maple Grove — a timing malfunction plagued the team Friday evening and a blower pulley broke off the dragster on Saturday. With two solid passes under their belt they entered race day from the No. 11 position to race three-time champion Antron Brown in the first round. Force started to haze the tires down track and had to shut-off for a 4.124-second pass at 288.27 mph to Brown’s 3.800 at 327.35 mph.

“The big thing is we are in the Countdown and we were going for a win this weekend in Reading. It’s the first race of the off season and we wanted to start it off right. But it just wasn’t our weekend,” Force said. “We blew the tires off the thing and we’re struggling. We’re really trying to figure it out, but all my guys are right there with me. I know they are putting their heart into this car, trying to figure it out. Our hard work hasn’t paid off yet, but I know there are five left and I know we can turn the corner and we’re going after wins and want to move up that ladder. I have the greatest group around me and we’ll head on to the next one and see what we can do there.”

John Force Racing will head to Gateway Motorsports Park for the AAA Insurance NHRA Midwest Nationals, the second of six races in the NHRA Countdown to the Championship, Sept. 21-23 outside of St. Louis in Madison, Ill.