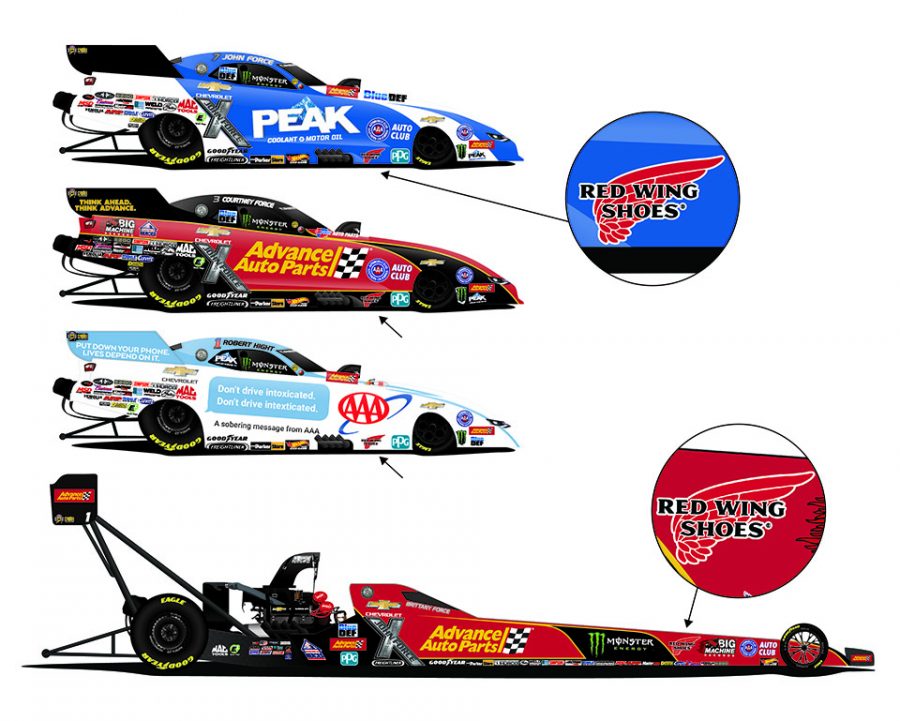 YORBA LINDA, Calif. (Sept. 13, 2018) — For the remainder of 2018, John Force Racing will add Red Wing Shoe Company as a sponsor to their fleet of NHRA Mello Yello Drag Racing Series hot rods, it was announced today. With a 113-year history of creating purpose-built footwear that protects workers in some of the harshest conditions, Red Wing Shoe Company was built by years of hard work and endurance, making them a perfect partner for John Force Racing.

Today, the global company has a network of distributers and retail locations across 110 countries, an accomplishment built by years of hard work, endurance, and the promise to never compromise on quality.

“We are very excited to bring Red Wing Shoes on board for the remainder of the season,” said 16-time world champion and team namesake John Force. “Their dedication to bring a hard-working product to hardworking people hits home for me having started in the truck driving business. Their shoes are something that not only our drivers can wear and promote, but our crews can really benefit from.”

“At Red Wing Shoe Company, we have a deep appreciation for the men and women that work behind the scenes to make sure that everything runs smoothly on race day, which makes this a natural partnership,” said Dave Schneider, Vice President and Chief Marketing Officer, Red Wing Shoe Company. “We look forward to cheering on the John Force Racing drivers and their many crew members for the remainder of the racing season.”

The three Chevrolet Camaro Funny Cars and the Top Fuel dragster of John Force Racing will fly the Red Wing Shoes Company’s logo for the final six races of the NHRA Mello Yello Season beginning with the NHRA Nationals in Reading, Pa., this weekend.

About Red Wing Shoe Company
The Red Wing Shoe Company, Inc. is a global leader in the design, production and distribution of work, safety and lifestyle footwear and work apparel. Established in 1905 in Red Wing, Minnesota, today the privately-held company’s family of brands includes Red Wing®, the premium choice for purpose built work footwear including a collection of Heritage styles created for any occasion; Irish Setter®, the footwear brand of choice for hunters who want uncompromising quality and innovation; Vasque®, a pioneer of performance hiking footwear; WORX™, a trusted brand for the industrial safety footwear market; and S.B. Foot Tanning Company, one of the largest USA producers of fine tanned leather for footwear and leather goods. Its brands are distributed to more than 110 countries in an immersive multi-channel environment of 500+ Red Wing retail stores, third-party partners, and owned ecommerce platforms.