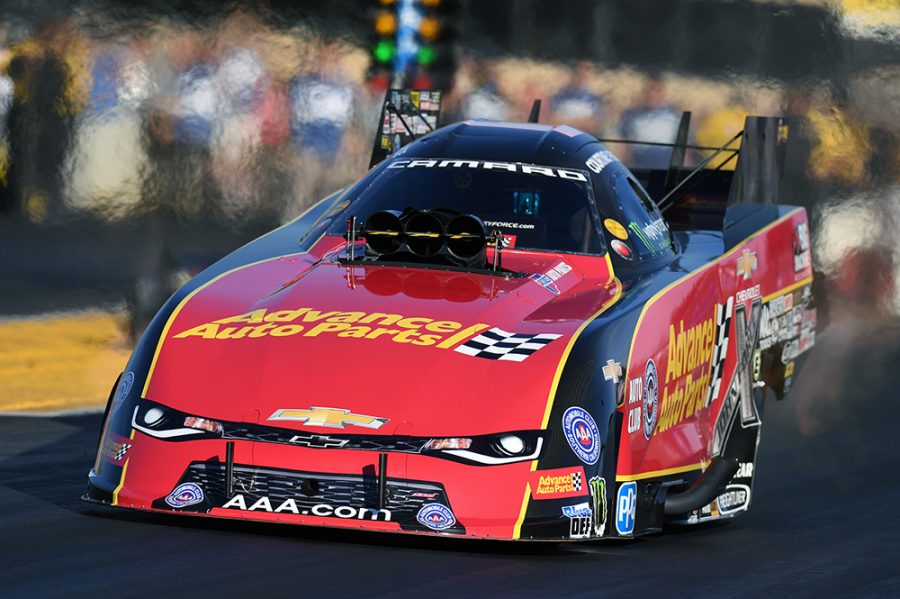 Courtney Force’s 10 No. 1 qualifiers ties the fourth most during one season in Funny Car history. It is also the most in the Funny Car category since 2000 when her dad, John Force, secured 11. Not to mention it is also the most No. 1 starts by a woman in any professional category.

“The credit is owed to my entire Advance Auto Parts team, every single crew guy who has been working on that race car doing such an incredible and consistent job on it, especially (co-crew chiefs) Brian Corradi and Dan Hood. It’s been a lot of fun for me to drive. They have that thing dialed in,” Force said.

Force secured the No. 1 spot off the efforts of her 3.910-second pass at 326.16 mph from Friday night’s session. Force has now tallied 27 No. 1 qualifiers in her career and two at Sonoma Raceway. She previously qualified in the top spot at the venue in 2014, doubling up with her sister Brittany Force who was No. 1 in Top Fuel, and went on to win the race.

Throughout Saturday qualifying, Force and her Advance Auto Parts Chevy struggled to get down track, in Q3 Force narrowly missed the wall and in Q4 it lost traction.

“We had a great number in Q2 yesterday that took us to that top spot. We were looking to improve today or at least have a little more consistency but struggled a little bit,” explained Force. “The tire was slipping in Q3 and dropped a hole simultaneously that tried to shoot me over to the wall. I was able to keep it off and was looking to have a better run in Q4. We didn’t get it but were still able to keep that top spot, which feels pretty good especially for our 10th this season, which is pretty incredible. This is exactly how we would like to go into the second race of the (Western) Swing.”

Coming off a big win last week at Denver, one that pushed his career total to a drag racing record 149, John Force will start Sunday from the No. 9 position in his PEAK Coolant and Motor Oil Chevrolet Camaro SS. Although he won’t have lane choice in a first round match with former Top Fuel world champ Shawn Langdon, Force is optimistic after making his best run of the weekend on his final qualifying attempt in the 750th race of his pro career.

“I don’t feel any different,” the 16-time champion said, “except that I’ve aged 750 races. The real truth is, when it’s time (to climb out of the car), I’ll know and I’ll make that decision myself. It’ll be because it’s time and it ain’t time yet. I’m having too much fun. I’ve got a good race car. We found a problem today. Our choke was stuck (but) we changed a blower on it and, boy, it ran an .02 like nothing. Now she’ll run in the threes. We’ll just see what we can do tomorrow.”

Robert Hight, whose lone victory at Sonoma came in 2008, also will race in the first round without lane choice after qualifying 11th in his national record-holding Auto Club of Southern California Chevrolet Camaro SS. Consecutive 4.12 runs on Saturday were not exactly encouraging for the two-time world champion. Nevertheless Hight remains optimistic.

“(The 4.12s) are nowhere near the zip code we want to be in,” Hight said. “The first run today we tried some things that didn’t work. Second run, it dropped a cylinder. (Crew chief) Jimmy (Prock) believes the power is there. We’ve just got to get the clutch right and we better get it right Sunday because we have a tough opponent first round. End of story.”

Brittany Force, in the PEAK Coolant and Motor Oil Monster Energy dragster, will be racing for their second win of the season and first at Sonoma Raceway from the No. 5 position in Top Fuel. Her 3.752-second run at 328.78 mph from Friday night earned her matchup with No. 12 qualifier Richie Crampton. Force, like her teammates, struggled to get down the track through Saturday qualifying with an engine explosion in Q3 and tire smoke during her Q4 pass.

“We had one good run yesterday, a solid pass at 3.75 that got us up to No. 5. Killer run for us in optimum conditions. Today was a little bit different,” Force said. “Conditions are closer to what Sunday, race day, will look like. We struggled to get down there but we’re going in with a good attitude. Tomorrow is a whole new race day with PEAK Coolant and Motor Oil on board with Monster Energy and we’re looking to get them in the winners’ circle.”

Eliminations for at the 39th annual Toyota NHRA Sonoma Nationals begin Sunday at 11 a.m. at Sonoma Raceway. Tune into FOX Broadcasting Network at 4 p.m. ET to catch the live finals.