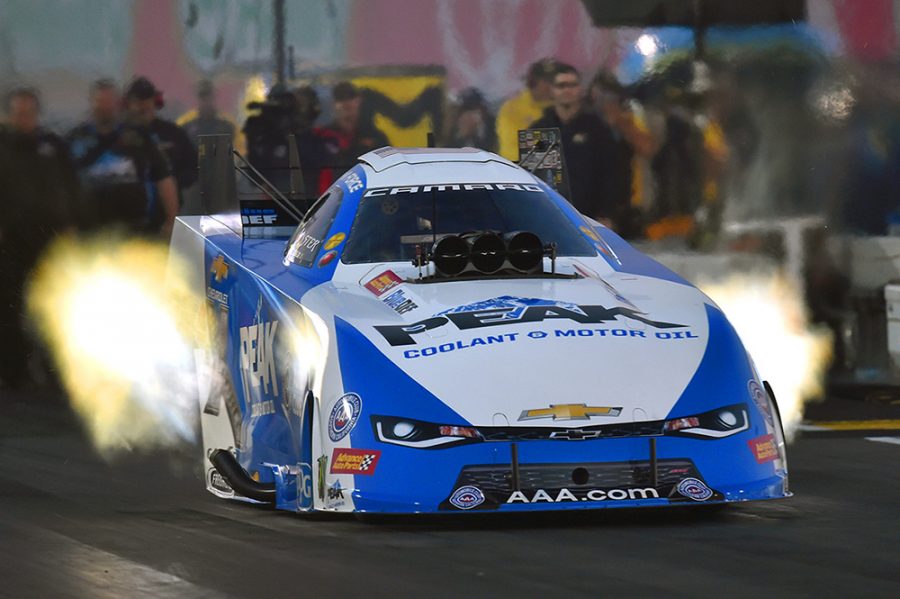 SONOMA, Calif. (July 27, 2018) — When John Force and his PEAK Coolant and Motor Oil Chevrolet Camaro SS took the light for his first qualifying pass at the 39th annual Toyota NHRA Sonoma Nationals it marked an incredible 750 race starts for the legendary driver. The sixteen-time world champion has officially participated in 750 NHRA Nationals events in his 42-year career.

During his career, the series has grown from nine races to 24 and the course has shrunk by 320 feet. He won races at tracks no longer part of the Mello Yello series, many of them unfamiliar to an entire generation of racers and race fans, like those at Baton Rouge, La., Montreal, Canada, Columbus, Ohio, Memphis, Tenn., Ontario, Calif., and Irvine, Calif.

As monumental as the 750 number is, Force is also chasing another milestone, his 150th event victory. Force is beginning his campaign for 150 with a 4.086-second pass at 314.17 mph during the first qualifying session at Sonoma Raceway. The run originally landed him in the No. 4 spot but a second session under the lights and in the cool of the night pushed the PEAK team down the ladder. When they took their turn at improvement, they overpowered the track and coasted across the finish line with and eight-second run.

“It just didn’t go during that second run. You don’t get conditions like this,” explained Force. “Courtney ran 3.91 and (Jack) Beckman ran 3.92, so it was out there. We just missed it with our PEAK Coolant and Motor Oil Chevy. The only good thing is we went down the track on the first run, so we got some data there for race day. We’ll try to move up tomorrow but we’ll have to do it in the heat.”

Courtney Force and the Advance Auto Parts Chevrolet Camaro team raced to the top spot of Funny Car under the lights at Sonoma Raceway during the opening day of the Toyota NHRA Sonoma Nationals.

In the first session of qualifying, the Advance Auto Parts team shut off early for a 4.335-second pass at 187.13 mph to land them ninth. They jumped the eight spots to No. 1 after running 3.910 seconds at 326.16 mph with header flames lit during the Friday night session.

“Actually in Q1, I feel like I kind of let that car drive me a little bit. It started to wiggle a little bit and it came loose down at the top end. I was pointing the finger at myself,” Force said. “I knew that on the second pass, when you have conditions like that, it’s usually the time when the top teams really shine. That’s when you can really try to push the car hard and go to the top spot. I knew I had to be perfect on that run. I tried to keep that car straight as an arrow, as smooth as possible. Brian Corradi, Dan Hood and my entire Advance Auto Parts team did the rest.

“I hit the parachutes down at the top end and felt the negative Gs hit hard and I knew we had a great pass, I waited for my team to come on the radio and tell me what the number was because I kind of feel it in my body that it was a good one. I was really excited. We still have tomorrow but it feels good to have a great pass like that tonight here in Sonoma,” Force continued.

Robert Hight, who set the national speed record at Sonoma Raceway last year with his 339.87 mph Friday night pass, is ninth off the efforts of his first session 4.051-second pass at 318.24 mph. The reigning world champion’s Auto Club of Southern California Chevrolet Camaro suffered an engine explosion during the night session that will make for a late night for his crew.

“It kind of rattled where John’s rattled. Mine went through it and I thought, ‘Alright we’re home free.’ But then, at about 200 feet it just went boom,” Hight recalled. “It burned No. 1 piston to a crisp and then somehow it tried lifting the cylinder head off and cross fired between one and three and that’s what blew the blower off. We don’t know why. Maybe a plugged nozzle. We haven’t gone through everything yet but somehow, No. 1 (cylinder) was running really lean.”

In Top Fuel, reigning world champion Brittany Force started the day with a 4.335-second pass at 187.13 mph that landed her in the eighth position but a solid 3.752 pass at 328.78 mph moved the PEAK Coolant and Motor Oil up to the fifth position.

“We had great conditions and this thing went right down there and put up an awesome number and moved us up to No. 5. We’re happy about it. We get two more tomorrow and I’m feeling good going into Saturday qualifying,” Force said. “I felt it start to shake a little bit, but it picked up and drove right through it and I knew once we got past that one spot, I want to say 400 feet out, I knew it would be okay. We’re happy with it. It’s a great run for our PEAK Coolant and Motor Oil Monster Energy team. Excited to be involved with PEAK this week. We have a whole new look and we want to get it in the winners’ circle.”

Qualifying at the Toyota NHRA Sonoma National continues Saturday with two sessions at 2 and 5 p.m. with eliminations set for 11 a.m. on Sunday at Sonoma Raceway.