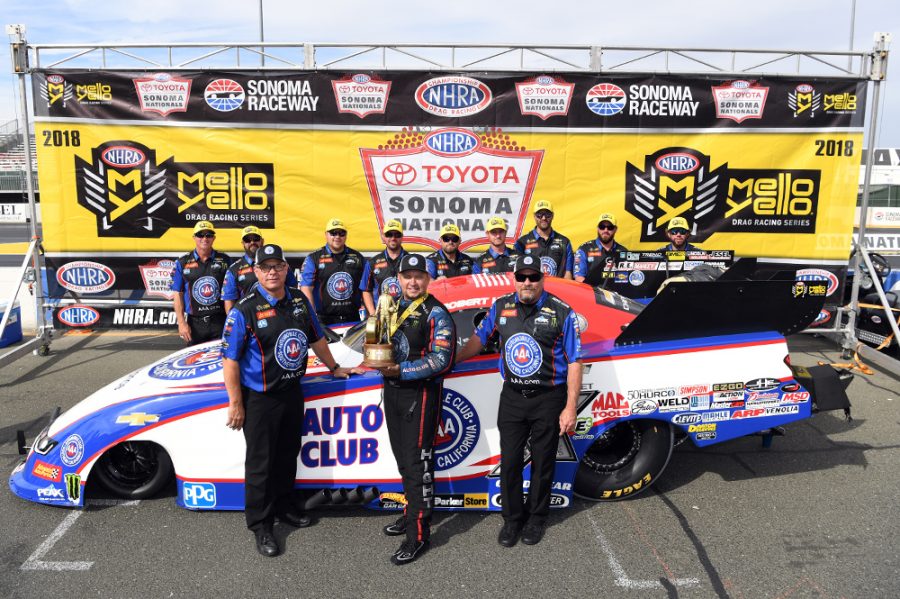 SONOMA, Calif. (July 29, 2018) — Robert Hight and the Auto Club of Southern California Chevrolet Camaro SS team raced their way to victory Sunday at the Toyota NHRA Sonoma Nationals in front of a sold-out crowd. Hight led the John Force Racing effort with John Force having a semifinal finish, Brittany Force making a second-round exit and Courtney Force having an early race day with a first round exit.

Hight, who only qualified 11th, had to face a slew of veteran racers on his way to the second win of the season, 43rd of his career and second at Sonoma Raceway. Hight and his Auto Club of Southern California Camaro were consistent throughout the day with three sub three-second runs.

“Sonoma Raceway, they really know how to do it right,” said the 43-time tour winner. “The weather we had this weekend made for three great days of racing. Then when you put a night session here where it cools down, well, you saw what we did last year. We ran 339.87 mph on Friday night last year (the NHRA national record). It cools down and this is a fast race track where anything can happen. But, we missed it this year on Friday night. We blew it up at about 200 feet. When you do that, it puts you behind the rest of the weekend.

“Then we go out there and we test a little bit on Saturday because (crew chiefs) Jimmy Prock and Chris Cunningham have not been happy with our set up. So, they tried some things yesterday…and they will both tell you, what they tried, did not work,” Hight said. “They go into race day still testing things, but they have a good feel for what these cars need and they gave me a lot of confidence going into first round. Normally, as the 11th qualifier, you aren’t real confident. They told me this thing was going to be just fine, it will run good, and it did. We ran in the threes all day and I think we had low E.T. in the semis with a 3.95. Matt Hagan ran a 3.95 first round. In the semis we ran a quicker 3.95 in tougher conditions. That to me was the run of the day in Funny Car and that was kind of what set us up to win this thing.”

In the final, Hight, the reigning world champion, faced a familiar foe of John Force Racing, Ron Capps, the 2016 world champion. Hight had the better car with a 3.984-second pass at 319.75 mph that out did Capps’ 4.077 pass at 296.11 mph despite Capps having the better reaction time. Hight is now 34-31 against Capps including being 6-2 over him in final round meetings. Hight has faced Capps more often than any other driver in his career, including his boss John Force who he has faced 44 times.

“As the day goes on, my confidence gets better and better — especially the way our car was running. But, I will be honest, I had my worst light of the day in the final against Capps. If he would have just made a good run, he probably would have got us because I didn’t have a great light,” said Hight, who moves into third in the points standings with the win. “That bothers me because you have to have good lights all day and you have to step it up in the finals. You have to dig deep, and have your A-game, and I didn’t. Luckily, we got the win, but next final, I am not going to let that happen. I am going to step it up, and I am going to be on my game.”

A week after earning his 149th career victory, John Force took the PEAK Coolant and Motor Oil Chevrolet Camaro SS back to the semifinal round Sunday before dropping a close decision to Ron Capps. Force had a starting line advantage but his 4.081 second run wasn’t quite good enough to match Capps and his 4.000. Nevertheless, Sunday’s success enabled the 16-time Funny Car champion to put more distance between himself and those with whom he contending for a berth in the upcoming Countdown to the Championship.

“I thought I had him,” Force said of Capps, whom he defeated in the final round of last week’s Dodge Mile-High Nationals, “but he’s got a real good race car. They know how to make that five-disc (clutch) work really good. So, we’ll just give them credit and move on this week to Seattle.”

In the first round, Force made his way around Shawn Langdon on a holeshot with his 4.026-second pass combined with a .040 reaction time bettering Langdon’s 4.000-second pass with a .073 reaction time. Second round, Force took out veteran Del Worsham, who had upset No. 1 qualifier Courtney Force in round 1. John put up a 4.069 second run to drive past Worsham’s 4.080.

To open race day, Brittany Force and her PEAK Coolant and Motor Oil Monster Energy dragster took a win from Richie Crampton when they laid down a 3.759-second pass at 329.91 mph bettering his 3.766 pass at 325.14. Despite the quality run, Force heeded lane choice in round two to eight-time world champion Tony Schumacher and suffered a hole out at the start and hazed the tires down track to put up 4.985-seconds at 144.77 mph. Schumacher to drove around Force with only a 4.375-second pass after he blew up in the lights.

Despite losing second round, making it out of the first round hasn’t been a guarantee for the Top Fuel world champion so heads are high as they head to the next race.

“We’ve been really struggling in the first round, but today we went right down there,” Force said. “It was a beautiful run and then, you know, we struggled in the second round (against Tony Schumacher). The thing is, we have to take these small victories when they come and just try to get ready for the Countdown. We’ve got three races left and we still have a lot to figure out on this car but I know this PEAK Coolant and Motor Oil Monster Energy team will be ready for it.”

It was an uncharacteristically short race day for Funny Car points leader Courtney Force. After qualifying No. 1 off a stout 3.910-second pass at 326.16 mph on Friday night, which remained quickest and fastest of the weekend, Force and her Advance Auto Parts Chevrolet Camaro SS ran 4.091 seconds at 300.00 mph with a hole out in the first round. They were outperformed by veteran Del Worsham who had a 3.983-second pass at 325.22 mph.

“I definitely had my hands full on that run. It dropped a cylinder. I tried to hold it off the center line as best I could and stay in the throttle to see if we hopefully could get around him but (Worsham) had a great run. I think it was the best he had all weekend and we weren’t there to be able to pass him,” Force said.

“I didn’t do my job as a driver. I was late on the tree. I think my foot tried to leave on the starting line about three times and as soon as that tree came down, I was already late,” Force continued. “I feel bad for my team for the job that I did and then when the car dropped a hole we just couldn’t get around him down there. So, we are just going to be excited to leave Sonoma right now and turn our focus to the final race in the Swing at Seattle.”