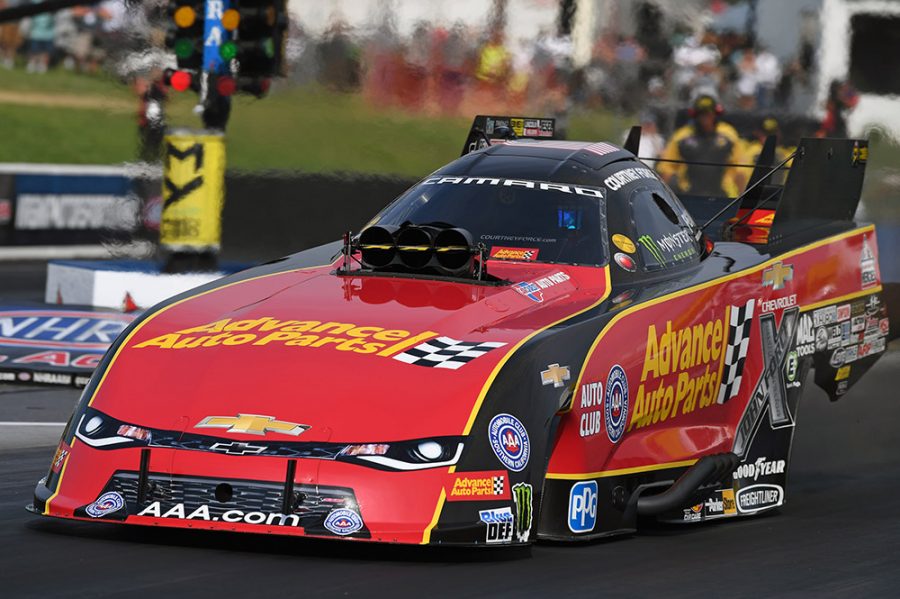 DINWIDDIE, Va. (June 09, 2018) — Courtney Force powered her Advance Auto Parts Chevrolet Camaro SS Funny Car to her sixth No. 1 qualifying position of the season at a sold-out Virginia NHRA Nationals at Virginia Motorsports Park outside of Richmond, Va. Robert Hight maintained his No. 2 position and John Force is No. 7. In Top Fuel, Brittany Force held onto her No. 2 spot.

Off the efforts of her 3.983-second pass at 323.35 mph, which is still the only three-second pass ever made in the Funny Car category at Virginia Motorsports Park, Courtney Force tallies her 23rd career No. 1 and continues her season long streak of qualifying inside of the top four.

“I feel confident about this Advance Auto Parts Funny Car and the team that we have. We have had a great start to the season but we need to keep out focus,” Force said. “We have had three wins but we have to focus on keeping it going. Our goal is to keep moving forward round by round and keep it in the groove. Hopefully we can end on a high note at the end of the year. It has been a lot of fun driving this race car so far this season.”

Force and her Advance Auto Parts team have maintained their consistency throughout qualifying at the Virginia NHRA Nationals. Force was third quickest in the third qualifying session when she ran a 4.074-second pass and on a solo pass to end the day, Force crossed the finish line in an impressive 4.010 seconds to be the quickest of the session earning her an additional four bonus qualifying points on top of her six from Friday.

“My team is incredible. My crew chief Brian Corradi got on the radio as I was turning off the track and said, ‘We have a rockin’ car.’ I got right back on the radio and told him it was only because we have a rockin’ team,” expressed Force. “Our success is, honestly, due to those guys who are working on this Advance Auto Parts race car. Running this car in the heat and putting a good number on the board definitely feels pretty good and has us feeling good going into race day. It is awesome we were able to get bonus points on every single run this weekend. Those points add up throughout the season. It was a good day today.”

While Force has never herself won at Virginia Motorsports Park, she has experienced a winner’s circle at the historic track.

“This is a brand new track for us. I have to thank the Franklins and everyone here in Virginia for having us back. We are excited for race day tomorrow. It feels awesome to have a No. 1 qualifier hat but it is important for us to continue to go rounds, keep the momentum and hopefully end up in the winner’s circle,” Force said. “The last memory I have from this track was my seventh birthday and I was here with my dad in the winner’s circle. He was celebrating a win and I was in a Virginia is for Lovers t-shirt. It is really cool to be back here and hopefully we get a win of our own.”

During round one of eliminations, Force will race against Jeff Diehl. The last time Force and Diehl raced against each other was first round of eliminations at the Southern Nationals outside of Atlanta — Force went on to win the race.

Consistency is running in the family for the Forces, like her sister Courtney, Brittany Force continued to have good, if not great, numbers throughout Saturday qualifying. Force, who ultimately qualified second based on her 3.808-second pass at 324.75 mph from Friday, was quickest during Q3 with a 3.822-second run and was second quickest in the final qualifying session with a 3.831. Force and her Advance Auto Parts Monster Energy dragster earned an additional five bonus points, a total of 10 for the two days of qualifying.

“I am very impressed with the success we have had here,” Force said. “It is a brand new racetrack and I have never been down it before. We are also down a man today because (crew chief) Brian Husen was sick and didn’t come to the track. Everyone has had to pick up the loose ends. I think that’s always concerning because everyone has their routines and this changes all that. These guys picked up everything and covered all the duties. We had two killer runs today and two killer runs yesterday. I am very pumped by that consistency especially running every run in the low 3.80s. I am looking forward to race day. I would love, love to bring home a win here just because I want to be able to say this was my first time at this track and we won here. That would be pretty outstanding.”

In round one, Force will race Bill Litton for the first time in her career. Litton will be Force’s 38th different opponent and it will be the second consecutive race she’s raced a new opponent to begin eliminations.

After a stellar performance during Friday’s qualifying where the Auto Club of Southern California team ran 4.074 seconds and 4.039 seconds to lock in the No. 2 qualifying position, Hight and his Chevy Camaro smoked the tires on both passes Saturday.

“We didn’t get down the track today but I am not worried about that,” Hight said. “(Crew chief) Jimmy Prock is aggressive and he tried to get everything out of both of those runs. We will be ready for tomorrow with this Auto Club Camaro. We made good runs yesterday and we had the quickest runs right up there with our teammate Courtney Force. This track surface has held up really well in the heat and I bet we get some cloud cover to it might tighten up a little tomorrow. We’ll be ready for that.”

Hight, who raced at Virginia Motorsports Park from 2006-2009, is looking for his first win at the Virginia NHRA Nationals. To get things started Hight will line-up with a familiar foe in round one, Cruz Pedregon. Hight and Pedregon have raced each other in the first round for three consecutive races now. The first meeting of the three-in-a-row ended with Hight in the finals of the Heartland Nationals in Topeka, Kan. and the most recent first round meeting ended with Hight winning his first race of the season at the Route 66 NHRA Nationals outside of Chicago.

John Force and his PEAK Coolant and Motor Oil Chevy Camaro continued to build off of their 4.065-second run at 317.12 from Friday night at Virginia Motorsports Park, starting with his first run of the day, a 4.065-second pass that was second quickest of the session. The 148-time winner had another clean pass in the heat of the day during the final session and crossed the line with at 4.121 seconds.

“We made three good runs and qualified No. 7. We are turning it around and we are seeing the results of the changes we have made,” Force explained. “I am confident in this PEAK Coolant and Motor Oil race car. I am old school but I am also still learning. When you walk out here and see Courtney and Robert 1-2 and Brittany is No. 2 everyone is doing their jobs. Courtney and Brittany were both quick of that last session. My car will be fine. It hasn’t won any races this season but we know how to win here at Virginia Motorsports Park.”

Before the NHRA left Virginia Motorsports Park in 2009, Force had tallied four wins at the track, he’ll be looking for his fifth when he starts things off against another Funny Car veteran, Tommy Johnson Jr., in round one.

Eliminations at the Virginia NHRA Nationals begin at noon at Virginia Motorsports Park outside of Richmond. Watch the action on FOX Sports 1 (FS1) at 6 p.m. ET.