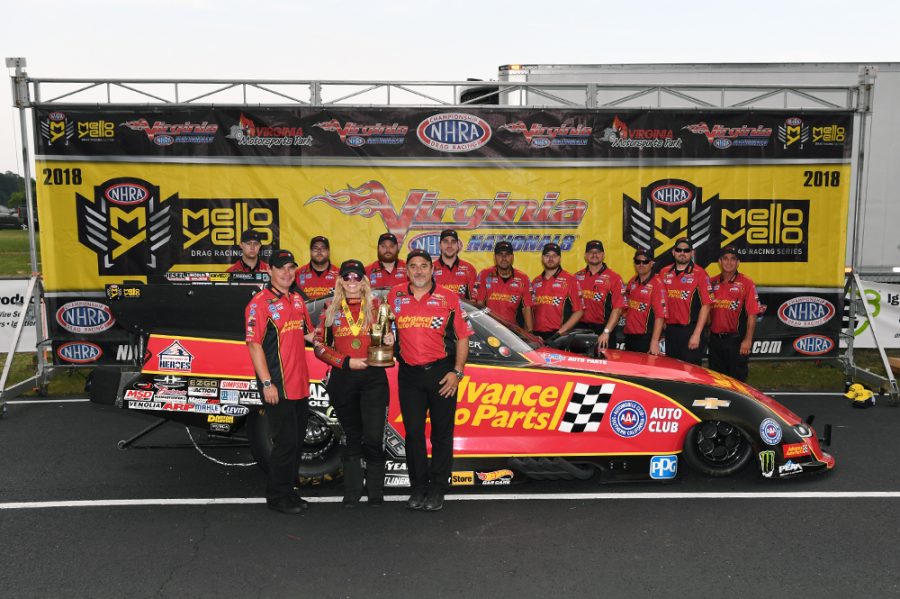 DINWIDDIE, Va. (June 10, 2018) — Courtney Force dominated the tenth race of the season by every metric, qualifying No. 1, running low ET, top speed and winning the race. The Funny Car points leader extended her lead and powered her Advance Auto Parts Chevrolet Camaro SS Funny Car to her fourth victory of the season defeating father John Force in the Virginia NHRA Nationals final round Sunday at Virginia Motorsports Park. Reigning world champions Robert Hight and Brittany Force had early exits in the first round.

After two days of qualifying where Courtney Force went quickest in the first, second and fourth session and was third quickest in the third session, Force continued her domination in eliminations by first defeating Jeff Diehl in the opening round before running quickest of the weekend with a 3.972-second pass at 325.45 mph to defeat Jim Campbell in round two. She then took out 2018 two-time winner J.R. Todd before facing off with and beating her father in the final.

“This was a great job by my Advance Auto Parts team. It was exciting to be in an all Force final and to see that PEAK team do so well. They have a good thing going over there. They had me nervous when I rolled up for the final round. We had a great side by side race. Brian Corradi and Danny Hood have done a great job with this team and race car. We have been so consistent but we stumbled a little in the first round but we got away with it,” explained Force.

Force has watched her father race for years, now that she’s racing against him, she’s well versed in his ways.

“My dad has his routine and I have grown up watching that routine,” said Force. “I prepared myself that it was going to be a long tree and I just tried to play his game and not let it screw with me. He still made me wait but that is OK because we had a car for him.”

It’s been ten years since the NHRA raced at Virginia Motorsports Park, but Courtney Force has a sweet memory from the vintage track. For her seventh birthday all she wanted was to go with her dad to a drag race. She got her birthday wish.

“The last time I was here I was seven years old. All I wanted for my birthday was to come to a race with just my dad and it was this race track. We got to celebrate in the winner’s circle and I was wearing a Virginia is for Lovers t-shirt. I am excited to wear that shirt in the winner’s circle today for my win. Dad was talking about dancing in a bar and that is because he took me to a bar to celebrate his win. I was playing Ace of Base on repeat on the juke box and I was dancing beside the juke box. That is the real story,” clarified Courtney Force. “I think it was surreal to come to this very track with him again and race him in the final round. That was pretty cool. I don’t think I could have written a better story. I was going to be excited whether he got the win or I did. There were so many fans here it was amazing. That says a lot about the Franklins who run this track. It was sold out yesterday and I bet it was sold out today.”

The win marks the 12th of her seven-year career, winning a third of them in a season that is not even half over. Force has won each of her 2018 victories from the No. 1 qualifying position, a feat last done 16 years ago by none other than John Force. However, Courtney is not taking the success for granted or letting it get to her head.

“This is just the beginning of the season and we just have to maintain our focus,” Force said. “So much credit goes to my team and the job that they have done. I am trying to keep up with them and perform well as a driver. We are in the points lead right now and we stretched it a little more with the win today. Our focus is getting to Indy and having a cushion and locking into the countdown. Get back to me then about how we are doing. That is when we are really going to need this momentum. Right now, it is great but we really have to keep it all season long if we want to end up on top at the end of the season.”

“I was cheating the line up there. I am not that good,” said Force of his reaction time. “I love racing ole Cruz. He has been going through what I have been with all these explosions. I am really sorry to see that. He is a good man. It is great to be back in Richmond. I love racing with my family all our race cars. That’s all I got.”

Against Tim Wilkerson in the semifinals, Force stayed consistent powering his Chevy Camaro to a 4.077-second pass at 316.97 mph and gave the PEAK Coolant and Motor Oil team confidence heading into a milestone final round.

“I have a real fast hot rod now,” Force said. “I have struggled but my boys with the PEAK team are ready for the fight. We are running good today and we were ready for that final round against Courtney and that Advance Auto Parts team.”

Not only was Force racing his daughter but it was Force’s 250th final round appearance. After a season that began on a rough note, Force’s second final round appearance of the season was welcomed and the weekend marked a turning point for the 148-time winner. With the runner-up finish, Force moved into eighth in Mello Yello points standings, jumping up from the 11th position.

“Any time you can win that is a good day. My team is coming around. I am really proud of this PEAK team led by Jon Schaffer and Ronnie Thompson. We moved up to eighth in the points. I have been spending time with my team all day and they give me energy. We are battling and I am still in the fight. The fans have been great here and I have to thank the Franklins for giving us a great race,” said Force from his daughter’s winners’ circle.

Robert Hight ended his day early against Cruz Pedregon in the first round of eliminations. Hight, who was the No. 2 qualifier, had impressive numbers during Friday’s qualifying and was second quickest in both sessions with a 4.074-second pass and 4.039-second pass at 318.39 mph that earned him the No. 2 spot. As Hight was pulling away from a struggling Cruz Pedregon on Sunday afternoon, the reigning Funny Car champion experienced his own problems. As the finish line closed in Hight’s Camaro dropped cylinders slowing him to a 4.314-second pass which was bettered by Pedregon’s 4.254.

“We haven’t dropped any cylinders all weekend,” explained Hight. “There was really pretty bad air today. You were seeing a lot of dropped cylinders out there. We are going to test tomorrow and then head to Bristol. We didn’t get hurt to badly in the points. We were trying to make a good run like we did in Q1. We were looking to run 4.07 and we could win all day long with that kind of ET.”

Reigning Top Fuel world champion Brittany Force ended a consistent weekend with tire smoke in the first round. Force qualified second with her 3.808-second pass at 324.75 mph from Friday evening and earned 10 bonus points throughout qualifying when she ran quickest in sessions one and four and second quickest in sessions two and three. Force and her Advance Auto Parts Monster Energy team switched lanes at the last moment and ended up smoking the tires, resulting in Force having to pedal the dragster. Her opponent, Bill Litton, narrowly outran Force’s 5.274-second pass with a 4.026.

“The first round we were back and forth on which lane to run. We were looking to try and get the best opportunity to give us lane choice for the next run. I think we just pushed it too hard and blew the tires off it. We lost traction about 80 feet out just past the Christmas Tree. I pedaled it but Litton was on a decent run and got the win light,” Force explained. “Pedaling these race cars is all about letting them settle down and being patient enough to wait before getting back on the throttle. I was able to get it under control again and get it going again but we just ran out of race track.”