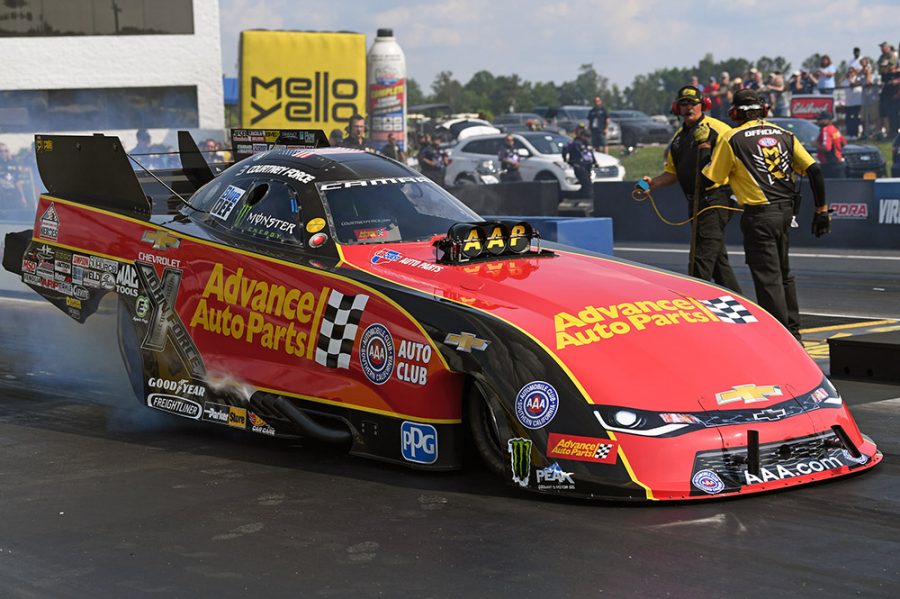 DINWIDDIE, Va. (June 08, 2018) — Courtney Force and the Advance Auto Parts Chevrolet Camaro SS Funny Car are the provisional leaders at the inaugural Virginia NHRA Nationals at Virginia Motorsports Park outside of Richmond, Va. Robert Hight follows closely in the No. 2 spot, John Force rounds out the Funny Cars in sixth and Brittany Force is No. 2 in Top Fuel.

Being in a new environment and encountering the warmest conditions so far this season have done nothing to deter Courtney Force and the Advance Auto Parts team, headed by crew chiefs Dan Hood and Brian Corradi. In both sessions, Force was quickest and, both times, overtook the No. 1 spot from teammate Robert Hight; first with her 4.058-second pass at 319.82 mph and then again with her 3.983-second pass at 323.35 mph. Force is the first and, currently, only Funny Car to race in the three-second range at Virginia Motorsports Park and her second pass set both ends of the track record.

“This is a new track and I didn’t know what to expect. Everyone said the track owners did an excellent job with the race track. I was excited to run on it and they said the surface was smooth. You don’t really know what to expect until you make that first pass. I think it was a sigh of relief once we got down to the other end. We ran that 4.05 in the first session and Corradi and Hood knew they could step on it in Q2. We wanted to get our No. 1 spot back after we watched a lot of teams make phenomenal runs. We saw Robert make that run and I heard Corradi say we were going to make some adjustments and the track could handle it. I am really proud of my guys.”

The sigh of relief came after an abnormally busy but exciting week for Force. After racing to the semis in Chicago, Force spent 24 hours home in California before taking off to Nashville to be a presenter at the CMT Awards on Wednesday night.

“It was a lot of sleep on airplanes and I got to sleep in a little this morning since we ran in the afternoon,” said Force about how she balanced the hectic schedule. “It was a lot of fun and I have to thank Big Machine Records and Advance Auto Parts for giving me such an amazing opportunity. It was exciting to introduce Sam Hunt and I was very nervous. I was way more nervous doing that than getting behind the wheel of my 330 mph Funny Car. We went straight from Chicago to California for 24 hours and then flew to Nashville for the red carpet and show and then on to Richmond.”

On the way to collecting six bonus points, Force had to maneuver around Robert Hight and the Auto Club of Southern California Chevrolet Camaro SS team. Hight, who is coming off his first win of the season last weekend at the Route 66 NHRA Nationals in Chicago, was second quickest in each session and collected four bonus points for the day.
Off the trailer, Hight ran a 4.074-second pass at 311.70 mph and shot to the top of the qualifying board until his teammate hit the track. During the second qualifying session, Hight and Force had been shuffled down several spots. Hight ran before Force in the qualifying order and retook the lead with a 4.039 at 318.39 until Force had the first three-second run in track history just one pass later.

“That No. 1 spot didn’t last long but good luck to Courtney Force and that Advance Auto Parts Camaro Funny Car team. We made two great runs here today and I am happy about that. All these fans are so appreciative that we are back in Virginia. It is good to see these guys again. They are bringing pictures up from previous races here.”

The Auto Club team, led by Jimmy Prock and Chris Cunningham, are nowhere near upset with their performance and will be looking to continue the consistency that started on race day in Chicago.

“We did what we wanted to do. Came out with a good run and then made another good run in Q2. I have a lot of confidence going into tomorrow,” added Hight.

Brittany Force, racing in her Advance Auto Parts Monster Energy red and black Top Fuel dragster, ended day one of the Virginia Nationals in the No. 2 spot. She piloted her hot rod to a 3.849-second pass at 320.28 in Q1 to lead the pack. During the second session, with much cooler track conditions, Force was bumped from her top spot but had the advantage of running last pair when she ran a 3.808 pass at 324.75 to jump into the No. 2 spot.

“It is exciting to be out here at a new track. I can’t remember the last time I made a first time run on a track. It has to be back in 2013 when I started. I went out there before the run and looked at the race track. To come out here in Q1 and go right to the top with a 3.84 is pretty awesome for this Advance Auto Parts Monster Energy team. In the second session we ran great again with a 3.80 and we wound up No. 2. That is a great spot to be in going into tomorrow.”

Sixteen-time champion John Force has continued to make adjustments to his PEAK Coolant and Motor Oil team and Chevy Camaro SS to get back to his winning ways. In the first session, Force was on a good run until his 10,000 horsepower Camaro dropped cylinders to cause his hot rod to make a move and cross over the centerline, resulting in a DNQ. In the second session, Force had a solid 4.068-seconds at 316.97 mph to lock in the No. 6 position for the day.

“We are learning a lot. (Crew chiefs) Jon Schaffer and Ronnie Thompson are working with Brian Corradi and Jimmy Prock and we are learning a lot about this combination,” Force explained. “We don’t have that much data. It was really hot and we are backing down these engines to go down the race track. I had a rough first run and it dropped some cylinders which pushed me over. It didn’t hurt the car. I came back and ran good and we are qualified No. 6. I am going to be OK. We want to come back here tomorrow and have it be a good show because they packed this place today. Courtney was No. 1 and Robert was No. 2 and Brittany was No. 2. We are going out here to win. We are going to be ready to go tomorrow.”

Qualifying at the Virginia NHRA Nationals continues Saturday with two sessions at 1:30 and 4 p.m. Catch the action live at 2 p.m. ET on FOX Sports 1 (FS1).