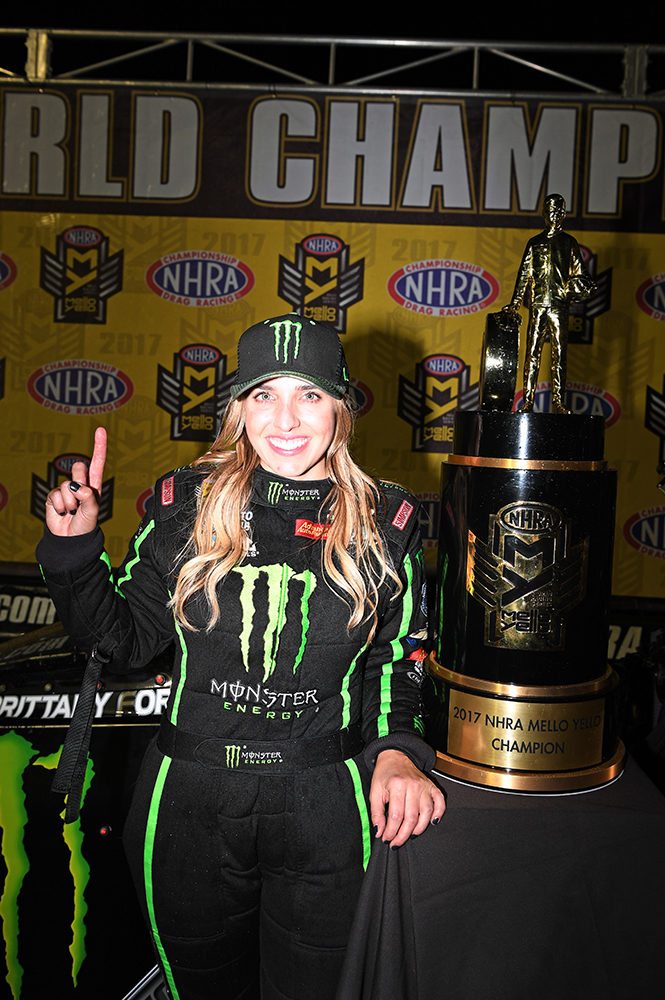 In doing so, she became the first daughter of the legendary John Force to win a championship, following her dad’s 16 Funny Car titles with one of her own.

She became just the second female to win a championship in the nitro categories and the first since Shirley Muldowney won the Top Fuel title in 1982.

“That’s pretty incredible,” Force said. “I’m still trying to wrap my head around a Pomona win. I’ve always wanted to win here – it’s my home track, and we have the championship. All of it, it’s still doesn’t seem real. The only reason it is real is because of all the support around me.”

That not only includes her family, but also her Monster Energy team. In her fifth season as a professional driver, Force has her first championship.

“It’s huge,” Force said. “I’ve watched my dad for years. I really have to give it up to him and thank him and my mom for all their support. They’ve always had my back every tough weekend. I’ve been beaten on holeshots countless times – and red lights, those are tough to come back from.

“But I really believed that that would make me a better driver in the end. Today is pretty great, seeing it all come back full circle.”

Force was solid all day, cutting good lights and eventually beating Shawn Langdon in the final for her fourth victory of the season and seventh of her career.

But the most important round win was in the second round, when she knocked off Richie Crampton moments after points leader Steve Torrence lost to Antron Brown. Force was first off the Christmas Tree and then made a pass of 3.679 seconds at 328.22 mph to beat Crampton and clinch the championship.

“I’ve been carrying a gut-ache for two weeks because I’ve been wanting to get here to today,” Force said. “I thought, ‘Just get me to Sunday, get me in my race car, and let’s see what our team can do.’ I know my team, my crew chiefs, and I know they bring everything to the line. Then it’s my job to finish it, and we did that all day long.”

In the final, she made another terrific run, 3.667 seconds at 330.07 mph to earn her third victory in the six-race Countdown to the Championship. Force and her John Force Racing team were terrific in the NHRA playoffs, winning three times, posting one runner-up finish and one semifinal finish. She began the Countdown in sixth place in points but scored the most points in the Countdown to vault to second behind Torrence.

“We’ve had an incredible day,” Force said. “I still haven’t wrapped my head around what happened. It’s a dream. I don’t know if I ever thought we’d be here. To lock everything up the way we did is pretty incredible, and I have to thank Alan Johnson, Brian Husen and my entire Monster Energy team for that.”