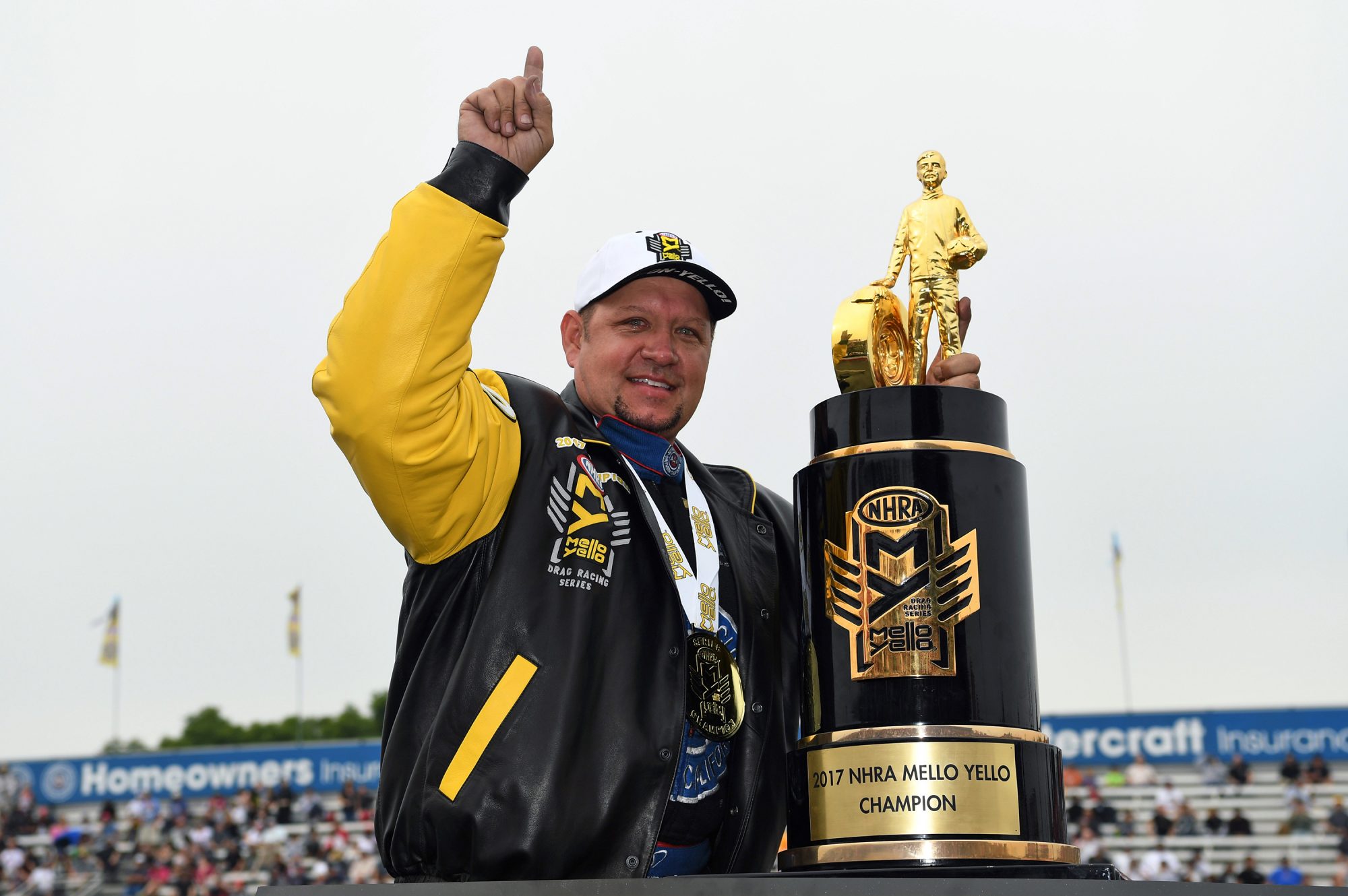 In the end, it was pure elation, as Hight captured the 2017 Funny Car championship.

“It’s been an eventful weekend,” Hight said. “Twenty-four hours ago, I wasn’t even qualified for this event, and we were leading the points. We got it together, got in the 15th spot. If you’re in, you have a chance, especially when you have a team like we’ve got with Jimmy Prock, Chris Cunningham. You just believe that those guys are a couple adjustments away from turning this thing around.”

The right adjustments were made, and Hight sped to a first-round win over Tim Wilkerson that eliminated John Force Racing teammate Courtney Force from title contention. Then, Del Worsham knocked off second-place Ron Capps, and Hight had the second championship of his career – this one coming eight years after his first.

“Del Worsham came over to me before first round and said, ‘I don’t think I can outrun him, but I’m not going to give it to him. I’m going to make sure my car goes down the track,’” Hight said. “Del Worsham did the right thing by making it go down the track. It’s pretty cool; it’s been 10 years since Chevrolet has won a championship in Funny Car, and we’re back.”

Hight came into the final race of the 2017 season leading by 20 points over Capps, but struggles in qualifying dropped that to eight before race day. Hight and his team struggled to get down the track in qualifying, and Hight had to pedal his Chevrolet Camaro SS in the final session to get in the 16-car field at No. 15.

But Prock and Cunningham tuned Hight to an incredible pass of 3.839 seconds at 332.51 mph in the first round Sunday, and qualifying was forgotten. Hight made another stellar run in the second and third rounds, beating Courtney Force in the semifinals to reach his seventh final of the season.

After getting the win light, though, the engine in Hight’s Auto Club car exploded, and the Camaro darted from left from the right lane.

Force, fortunately, had slowed from tire smoke and wasn’t close to Hight as he bounced off the wall in the left lane. The concussion from the explosion knocked the parachute handle out of Hight’s reach, but he was busy trying to control the car and slow it down.

Eventually, it reached the gravel pit past top end and ran into the nets. Hight was unhurt, but the car was too damaged to continue. The team brought out a backup chassis and a third body; the first, sporting a special California Highway Patrol paint scheme, was damaged in Q4.

The third body was built for Brittany Force’s Funny Car, and the JFR team had to swap decals for the final round.
There, Hight went up in smoke against Tommy Johnson Jr. and couldn’t get the race win, but the championship trophy was his.

“That was a crazy, crazy run,” Hight said. “When I got back to the pits, there were Advance crew members and PEAK crew members, and we really rallied to get this thing back together.”

But that was typical of JFR this season. John Force brought Prock and Cunningham to the team, and eventually moved them to lead Hight’s group. Hight responded with four victories – and two in the Countdown to the Championship – and national records in elapsed time (3.793 seconds) and speed (339.87 mph).

“We did a lot of work over the winter to put John Force Racing back together,” Hight said. “This was kind of a building year. It’s crazy how this building year turned into a dream. We could’ve never dreamed that we’d win two championships.

“Everybody worked their tail off and was quiet and knew they had a job to do. This is just huge for John Force Racing. For a couple of years, we have struggled but it is such a great group. We signed a long-term deal with Auto Club and they deserve better than what we were giving them. Jimmy Prock, Chris Cunningham (co-crew chief) they got us back in the game. It’s been a long time and you want it so bad.”

But Hight was quick to credit his team at the race track – and the guys back at John Force Racing in Brownsburg, Ind.

“We have a bunch of people back in Indianapolis at Force American Made who we need to really thank,” Hight said. “They build all this stuff. They build our race cars, mount our bodies, build all of our parts, engine parts, clutch parts and superchargers. These guys run those Hurco machines, and they really work their butts off. This championship is as much for them as it is for us.”