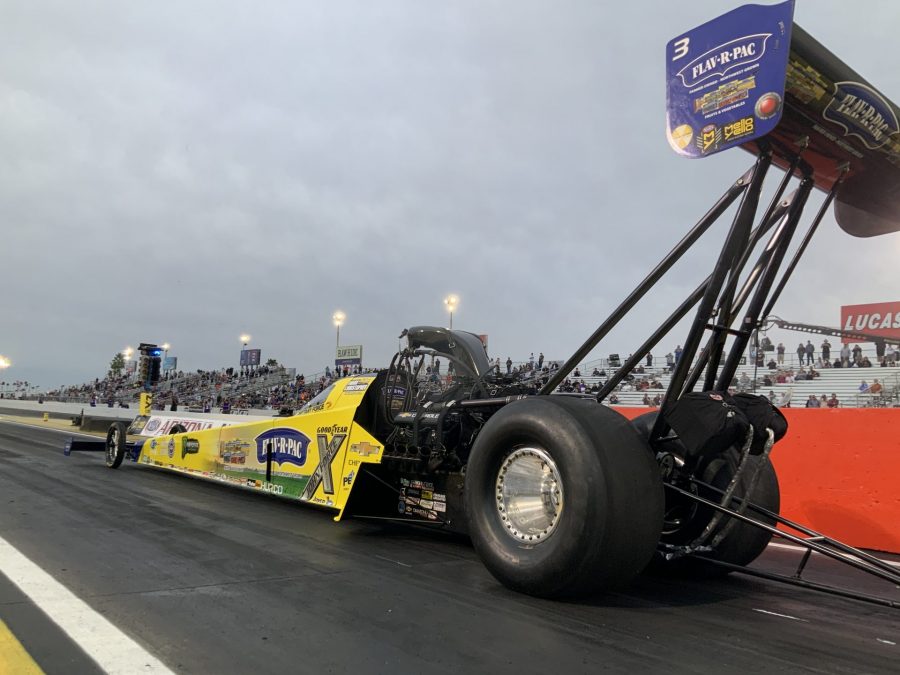 CHANDLER, Ariz. (Feb. 21, 2020) – Brittany Force, outfitted in the yellow and blue of her new sponsor Flav-R-Pac Frozen Fruits and Vegetables, picked up the preliminary Top Fuel No. 2 spot at the NHRA Arizona Nationals, the second race of the NHRA Mello Yello Drag Racing Series season. John Force, with his BlueDEF Chevrolet Camaro SS Funny Car, sits in the No. 2 spot while Robert Hight and the Auto Club of Southern California team are third. Rounding out John Force Racing Friday qualifying at Wild Horse Pass Motorsports Park is Austin Prock and the Montana Brand / Rocky Mountain Twist Top Fuel team in the No. 10 spot.

Brittany Force and the Flav-R-Pac Top Fuel team picked up right where they left off at the season-opening Winternationals where they secured the No. 1 qualifier and raced to the semifinals. On their first run of the Arizona Nationals weekend, the David Grubnic and Mac Savage tuned dragster made an impressive 3.707-second pass at 328.14 mph to be quickest of the session. As the last pair of nitro cars down track, Force improved to 3.680-seconds and 331.12 mph and, thanks to her speed, would shift into the No. 2 spot.

“It’s day one out here at the Arizona Nationals and I ended the night in the No. 2 spot with Flav-R-Pac. The car looks awesome,” Force said. “We went to the No. 1 spot earlier with a 3.70 and improved on that second run with a 3.68 so we’re feeling good and I’m just really excited for this Flav-R-Pac team. They’re our new sponsor and our plan is to go rounds on race day and get them in the winner’s circle Sunday.”

John Force and the BlueDEF Chevrolet Camaro SS team smoked the tires in the first qualifying session to cross the finish line with a 5.120-second pass at 114.80 mph. Coming into the evening session sitting in the No. 13 spot, Force powered his ‘Ole Blue’ Chevy to a blistering 3.861-second pass at 331.94 mph picking up two bonus for being second quickest of the Funny Car pack.

“We had a good day. All our cars are in and everyone’s watching the rain tomorrow but we came out with the new Flav-R-Pac dragster with Brittany and it was good to see them out there,” said Force, who like all the competitors, is watching the radar in hopes the looming forecast might change. “Brittany ran good for them too. Prock stepped up and got in the show with Montana Brand, and Robert with Auto Club looked pretty good too. I’m excited. I’m in second with BlueDEF. We blew some paint off the car but we’re ok and ready to see what happens tomorrow.”

Reigning and three-time Funny Car world champion, Robert Hight and his Auto Club Chevy Camaro SS team opened qualifying at Wild Horse Pass Motorsports Park with a stout 3.867-second pass at 330.55 mph to be quickest of the session and pick up three bonus points. In the night session, Hight had trouble down track and smoked the tires to run a 5.760-second pass at 118.47 mph. He’ll start day two of qualifying from third.

“In Q1 we were really good and quite a bit ahead of everybody else. Then tonight we really just pushed it. Jimmy (Prock) thought we were going to try and run an .82, .83 and we pushed too hard,” Hight said. “Looking at the data I know we can go back up there and make some adjustments and still try to run an .82 or .83 so I’m hoping the rain stays away tomorrow and we get another shot at it. We want to go to the top.”

After smoking the tires on his first go at Wild Horse Pass, Austin Prock and his Montana Brand / Rocky Mountain Twist team came out and laid down a 3.775-second pass at 314.24 mph that safely put the second-year driver in the field at No. 10.

“In that first session, the car did the same thing it did in the final round in Pomona. We thought we had it all figured out, but we actually had a problem in the bell housing, so we got that ironed out,” said Prock who had a runner-up finish at the season-opening Winternationals at Auto Club Raceway in Pomona. “The weather doesn’t look too promising tomorrow, so we just had to make a safe, clean pass in Q2 to make sure we were locked in for the show on Sunday and we ran a .77. We were trying to run a .73 but dropped a hole at about 500-feet and it slowed down in the back half, but we’ll get it ironed out and hopefully make a pass tomorrow to get into the top half of the field.”

Qualifying at the NHRA Arizona Nationals at Wild Horse Pass Motorsports Park is set to continue Saturday with sessions at 1:30 and 4:30 p.m. Sunday eliminations are slated for 11 a.m. Fans can tune into FOX Sports 1 (FS1) for television coverage from Saturday qualifying on Sunday at 3 p.m. ET with eliminations airing at 9 p.m. ET.