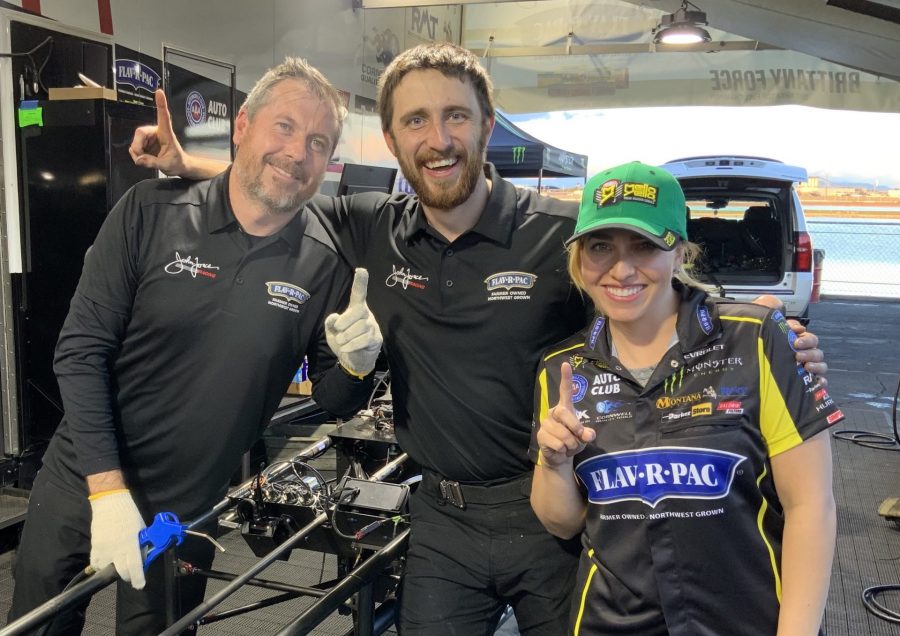 CHANDLER, Ariz. (Feb. 22, 2020) – Due to persistent rain, racing on Saturday at the NHRA Arizona Nationals at Wild Horse Pass Motorsports Park was reduced to just one qualifying session. That was all Brittany Force and the Flav-R-Pac Top Fuel team needed as they laid down an aggressive 3.670-second pass at 327.11 mph, earning Force the 20th No. 1 qualifier of her career and second consecutive of the NHRA Mello Yello Drag Racing Series season.

John Force and the BlueDEF Chevrolet Camaro SS team stayed in the No. 2 spot, Robert Hight kept his No. 3 positioning with the Automobile Club of Southern California team and Austin Prock and Montana Brand / Rocky Mountain Twist will start race day from 11th.

Coming into Saturday’s third and only qualifying round sitting in the No. 2 spot, Brittany Force brought the same momentum from her impressive performance during Friday’s sessions. The 2017 Top Fuel world champion propelled her David Grubnic and Mac Savage tuned dragster to a showstopping 3.670-second pass at 327.11 mph to be quickest of the pack and pick up three bonus points for a total of eight over the two days of qualifying. Force will begin race day with a round one matchup against Terry Totten as she chases her first win of the season, first at Wild Horse Pass and 11th of her career.

“David Grubnic was trying to run a little quicker than that but, that’s still a great number. It got us barely around Steve Torrence to steel that No. 1 spot,” Force said. “Our second No. 1 qualifier green hat of the season. Two races in, two No. 1 qualifiers. That just motivates the whole team. Top to bottom, me as a driver, crew chiefs, every single one of our guys; it just pumps us all up. It puts this energy in our pits. We’re ready for race day, we’re ready to go out and hopefully win the thing and put our new sponsor Flav-R-Pac in the winner’s circle. We’ve been consistent all weekend long with the three runs that we had but we need to do the same thing all day long on Sunday.”

In Saturday’s lone qualifying round, John Force lost traction in his BlueDEF Chevy Camaro to run 8.112-seconds at 81.95 mph. The sixteen-time Funny Car world champion would keep his No. 2 qualifying position from his pass on Friday night when he handled his 11,000-horsepower hot rod to a 3.861-second pass at 331.94 mph. Force, who has more race wins than any other driver in the nitro categories at Wild Horse Pass, will be competing for his ninth win at the facility when he takes on Terry Haddock in round one.

“Well, Brittany was low ET in Pomona with Monster Energy and came back and ran low ET with Flav-R-Pac so that’s pretty exciting. I’m second in the show with ‘Ole Blue’. I tried to go for it, but I couldn’t get there. Robert is right there in third and Prock’s right there in the show too,” said Force who has won five of seven first round races against Haddock. “We got in one run for the fans and that was important. We’re going to be good tomorrow and it’s going to be a beautiful day.”

Robert Hight and the Automobile Club of Southern California Chevrolet Camaro SS team will get race day started from the No. 3 spot thanks to his 3.867-second run at 330.55 mph from the first qualifying session that earned him three bonus points for being quickest of the pack. Tire smoke stopped Hight from improving through the two remaining sessions running 5.760-seconds Friday night and 7.712 on Saturday. The reigning and three-time Funny Car world champion will face Jim Campbell in the first round as he looks for his second win at Wild Horse Pass Motorsports Park.

“It’s a bummer we only got one qualifying session in today but we’re going into race day in the No. 3 spot. It’s not a bad place to be but we obviously wanted to go to that top spot. The weather is looking nice tomorrow and we’ll have some cooler conditions like we did today so I’m confident going into tomorrow,” said Hight who has won nine times from the No. 3 position. “Jimmy Prock, Chris Cunningham and the Auto Club guys are hungry to get into that winner’s circle and I am too so I hope we can get it done.”

Austin Prock and the Montana Brand / Rocky Mountain Twist team will start race day from the No. 11 spot off the efforts of their 3.775-second pass at 314.24 mph Friday night. During the only qualifying session on Saturday, Prock had trouble after tire shake to run a 5.393-second pass at 122.88 mph. The 2019 Auto Club Road to the Future Award winner is set to go head-to-head with Billy Torrence in round one of eliminations.

“We had a little bit of weather today and qualifying got shortened but we made some progress. We were battling some things from Pomona in the final that carried over here, but we got the car back in shape. It was running really good early, good enough to run a .66 and we just barely missed it. One more small change and we should be ready to go for tomorrow,” Prock said. “This Montana Brand / Rocky Mountain Twist team has a big first round matchup and those are the ones that get me excited so I’m looking forward to that.”

Eliminations for the NHRA Arizona Nationals are slated for 11 a.m. tomorrow. Fans can tune into FOX Sports 1 (FS1) for television coverage from Saturday qualifying on Sunday at 3 p.m. ET with eliminations airing at 9 p.m. ET.