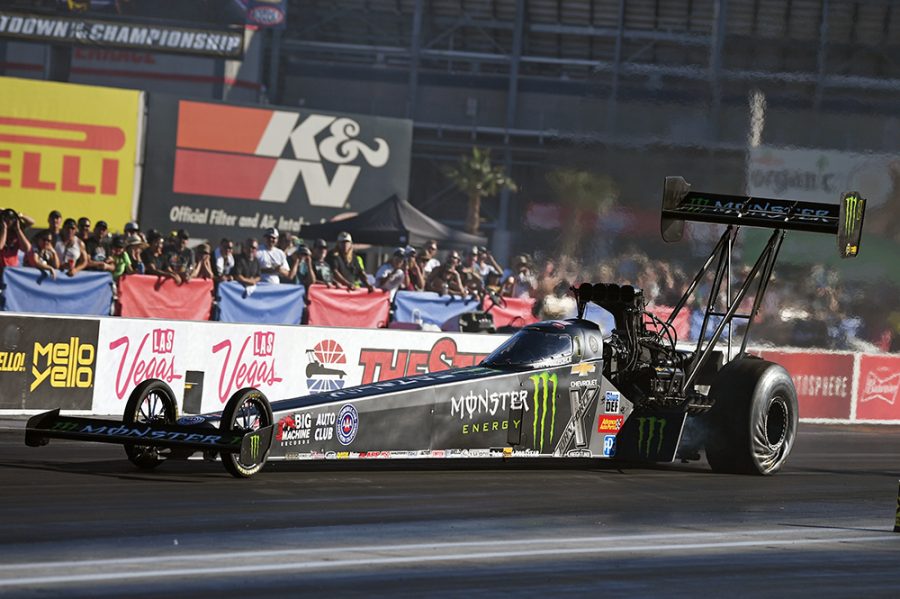 LAS VEGAS (Oct. 28, 2018) — With a quarterfinal finish Sunday at the NHRA Toyota Nationals, reigning Top Fuel world champion Brittany Force and her Monster Energy team moved their way into fifth in the NHRA Mello Yello points standings, a four-spot improvement from where she started the NHRA Countdown to the Championship.

Coming off a No. 1 qualifying position and a runner-up finish at the Carolina Nationals, Force and her Monster team carried over the momentum to enter Sunday as the No. 3 qualifiers. Their efforts earned them a first round match-up with Mike Salinas.

As the two dragsters fired up for their burnouts, Salinas’ dragster experienced an audible bang and had to shut off giving the Monster Energy dragster a single. Force took advantage of the pass and continued her consistency to run 3.738-seconds at 330.55 mph, just .015-seconds off her qualifying time.

Matched up with Richie Crampton in the second round, the Monster Energy team were overly aggressive and went up in smoke early as Crampton raced to a 3.766 at 321.96 mph win.
“We have some momentum which is really coming in from last weekend at Charlotte in making the finals. Here, we had three awesome qualifying passes, but fell in the second round. Definitely some momentum changes and some energy changes in our pits,” Force said. “There is one race left and if there is anything I know about (crew chiefs) Alan Johnson and Brian Husen is they love Pomona and always call it their best track. So there is one race left and we are hoping to win it.”

Younger sister, Courtney Force, also had a quarterfinal exit on Sunday. After laying down a stout 3.919-second pass at 326.87 mph, an improvement from her No. 6 qualifying time, to defeat Curz Pedregon in round one. Force had a familiar gremlin show it’s face again. Lined up with veteran Jack Beckman, Force and her Advance Auto Parts Chevrolet Camaro Funny Car put a cylinder out down track taking away much needed power for the Camaro Funny Car.

Despite having a hole out, Force crossed the line at 3.969 seconds at 320.66 mph and was only narrowly beat by Beckman’s 3.951 at 320.51. The showing gives Force confidence as she heads to the final race of the season sixth in points.

“It really shows the power behind our Chevy Camaro in round two,” Force said. “To be able to drop a cylinder down track to slow us down and still almost get away with the win really shows the strength of this team. It gets us excited going into the final race at Pomona and we got some things figured out with our Advance Auto Parts car. We are just looking forward to it. It wasn’t a bad week here in Vegas this weekend. We definitely found a lot of consistency that we had been lacking the last few races, so we are definitely going in the right direction.”

Reigning Funny Car world champion Robert Hight and his Auto Club of Southern California Chevy Camaro team had a rare first round finish after putting a cylinder out immediately off the starting line. Hight’s race car darted to the right as he tried to stay in the groove but was unable to maximize the run and coasted across the finish line at 4.643-seconds. The two-time Toyota Nationals winner and five -time winner at The Strip at Las Vegas Motor Speedway had to watch Shawn Langdon drive around him with a 3.922-second pass.

Hight will head to the Auto Club NHRA Finals second in the championship points battle by only 74 points.

“We struggled here in Las Vegas. We have to learn from today. It is similar to trap shooting. If you miss a target more than likely you are out of it but maybe not. You can’t let the missing of that target affect your next shot. If you miss another one you are for sure done,” explained Hight. “We will learn from today but not dwell on it. We are going to test tomorrow. I still believe in this team and everything we have going on. We have been here before. Every individual on this team has won a championship. We just have to go get it done. We are going to stay positive and move on to Pomona.”

Sixteen-time world champion John Force had his race day come to an early end after laying down an impressive 3.972-second pass ag 330.31 mph that was just three one-thousandths of a second slower than long-time rival Ron Capps’ 3.954 at 325.22.

Despite the loss, Force’s pass continued the consistency the PEAK Coolant and Motor Oil team had been generating through qualifying — Force had four consecutive 3.9-second runs, a welcomed change from the struggles his team face through the majority of the season.

“I wasn’t able to get there. It was a close race on my side. Courtney (Force) got beat in the second round and it was a neck-and-neck race. Robert (Hight) got beat when he lost a cylinder on the hit and it was over. They had to shut him off and that was key,” Force said. “If you look at the points, he came in with the lead and they (J.R. Todd) have the lead now. That is what it’s all about. The only one that knows what is going to happen is the good lord and we keep fighting and fighting. But Pomona is points and a half, so John Force Racing is good with our Chevrolets…you can count on that.”