BRITTANY FORCE LOOKING FOR REDEMPTION ON RACE DAY IN LAS VEGAS; ROBERT HIGHT ON MOVE FOR THE CHAMPIONSHIP 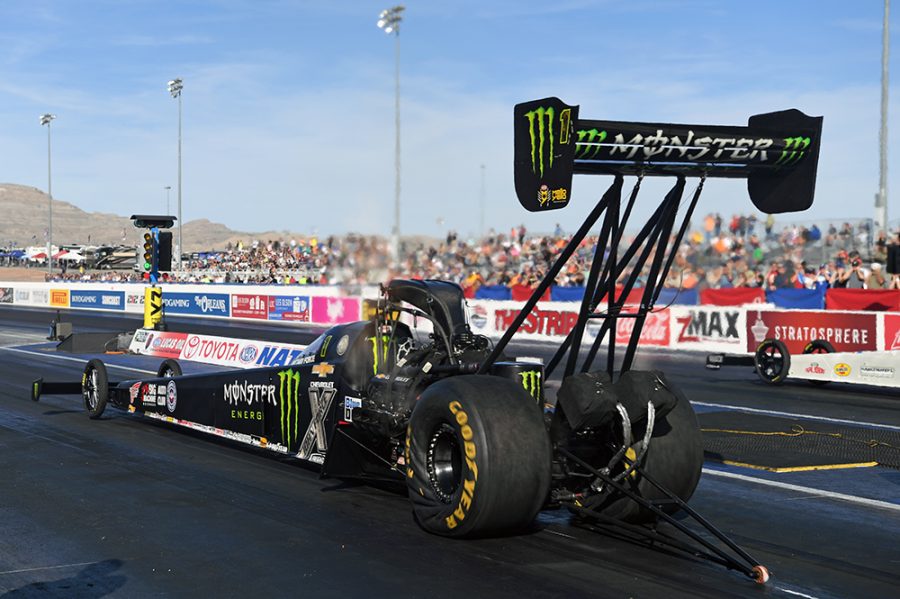 LAS VEGAS (Oct. 27, 2018) — The consistency continued on day two of the NHRA Toyota Nationals for reigning Top Fuel world champion Brittany Force. Force will lead the John Force Racing team into race day at The Strip at Las Vegas Motor Speedway as the No. 3 qualifier. Her Funny Car teammates line up with her father John Force in fifth, sister Courtney Force in sixth and points leader Robert Hight in seventh.

Brittany Force opened Saturday qualifying with a stout 3.723-second pass at 330.88 mph in her Monster Energy dragster. The effort would gain her a bonus point and earn her the No. 3 start. After stringing together several consistent passes through the previous race weekend and qualifying at The Strip, Force and her team were aggressive and tried to push the limits in the second session. They would smoke the tires to go 4.835 at 147.46 mph.

“This Monster Energy team has been really consistent the last two races. We proved that again this weekend in Las Vegas. We made three awesome qualifying runs. That last run we were pushing it to see how far we could take it. We knew it was a possibility that it would go up in smoke,” Force said. “We will reset for race day tomorrow and we run mike Salinas. We are looking to go rounds and ultimately end up in the winner’s circle.”

Force will be racing for her first victory at The Strip at Las Vegas Motor Speedway when she lines up with Mike Salinas in the first round of eliminations. In the hunt for her 2017 championship Force found herself in the final round at last year’s NHRA fall event but has a misstep that cost her the Wally.

“This race is a big one when you look back at last year. We should have won this race but in the final we had the red-light. I am glad to be back here and I want to redeem myself and take this thing all the way to the winner’s circle.”

With two races left in the season reigning champion and Mello Yello Funny Car point leader Robert Hight took advantage of a strong run on Friday to prepare for a long race day on Sunday. His first qualifying run of the event, a blistering 3.927 second pass at 328.38 mph, stood as his best qualifying effort. It earned him one bonus point and gave his team the confidence to get aggressive on a race day tune-up.

In the ensuing two qualifying sessions crew chiefs Jimmy Prock and Chris Cunningham poured powerful tune-ups into the 10,000 horsepower Auto Club of Southern California Chevrolet Camaro Funny Car. On each run Hight smoked the tires but valuable data was recorded to be evaluated for race day.

In the final session Hight powered down the track with one of the quickest runs of the session a solid 3.948 second run at 326.63 mph in the heat. Hight will go into race day as the No. 7 qualifier and a first round contest against Shawn Langdon, who Hight has a 2-0 career record against. The last time the two Funny Car racers met was the first round of the Dodge Nationals earlier this season with Hight picking up the win. This is the tenth time Hight has started the Toyota Nationals from the top half of the field.

“We will be OK for tomorrow,” said Hight, from his pits at the end of the day. “We made a good run to close out qualifying. Our goal is to win this race. We are working a few things out and I have a lot of confidence in Jimmy and Chris. There are a lot of cars out here running strong. Everyone is going to have to be at their best. I’m going to be ready tomorrow and I feel really good about this Automobile Club of Southern California Camaro.”

Hight will be looking for his third win at fall event at The Strip at Las Vegas Motor Speedway. With a six point lead in the Funny Car point standings the potential for a second round match up with J.R. Todd, who sit No. 2 in the points, could set the tone for an exciting finish to the NHRA season.

One of the most consistent qualifying performances of the weekend was turned in by 16-time Funny Car champion John Force. His PEAK Coolant and Motor Oil Chevrolet Camaro posted elapsed times of 4.007, 3.939, 3.944 and 3.926 seconds with the final three qualifying runs exceeding 330 mph apiece. He picked up qualifying bonus points in the second and fourth qualifying sessions for his efforts.

“Our teams have worked together and we have got three good Funny Cars,” said Force. “(Crew chiefs) Jon Schaffer and Ronnie Thompson have shown their fighting spirit. If you look back over the last three or four races, we have gone down the track just about every single time. Right now it’s for the Countdown and I am excited to race (Ron) Capps because I love him and he is a champion. It is a long shot and almost impossible for me to win, but like someone said, I never give up winning. It’s an attitude.”

Force is 59-39 against Capps in his career but only 2-4 this season. They have raced four times at the Toyota Nationals and Force has been perfect including first round wins in 2004, 2014 and 2017.

This is Force’s best starting position since the Denver national event. He was No. 5 qualifier at Denver and won the race.

“I have a good race car. We made it do the semis in Charlotte, but I am coming here to win,” added Force. “That’s what I am trying to do.”

Courtney Force will be battling her way to her first win at The Strip at Las Vegas Motor Speedway from the No. 6 spot off the efforts of her 3.962-second pass at 328.46 mph, just narrowly behind her father John Force in the No. 5 spot based on speed.

Force laid down her best qualifying run in the first session on Friday afternoon but remained consistent running a 3.926 at 325.61 mph in the second session and a 3.937 at 327.43 to start Saturday that also earned her a bonus point for being third quickest of the session. Having been shuffled back from No. 3 to No. 6 through the two days, Force and her Advance Auto Parts team were swinging for the fences in the final qualifying round but smoked the tires and overpowered the track.

“Our Advance Auto Parts team is back in our traditional red colors look at The Strip in Las Vegas. We have had such a great outing in qualifying. We were able to pick up six bonus points and we feel like this Chevy Camaro race car is really consistent,” Force said. “We are running a lot of 3.92s and we ran a 3.93 in the third qualifying session. On the final pass we were trying to push it hard and unfortunately we didn’t get it down there. We didn’t get the performance we were looking for but we will be ready for tomorrow. We’ll be racing Cruz Pedregon from the No. 6 spot so we have lane choice. We are going to have to fight for it tomorrow. I feel like we have a great race car and Brian Corradi and Dan Hood have done a great job so far this weekend. If we can keep that momentum going into race day I think we will be looking pretty good.”

Eliminations at the NHRA Toyota Nationals are slated to begin at 11 a.m. on Sunday morning. Catch the action from The Strip at Las Vegas Motor Speedway on FOX Sports 1 (FS1) at 7 p.m. ET.