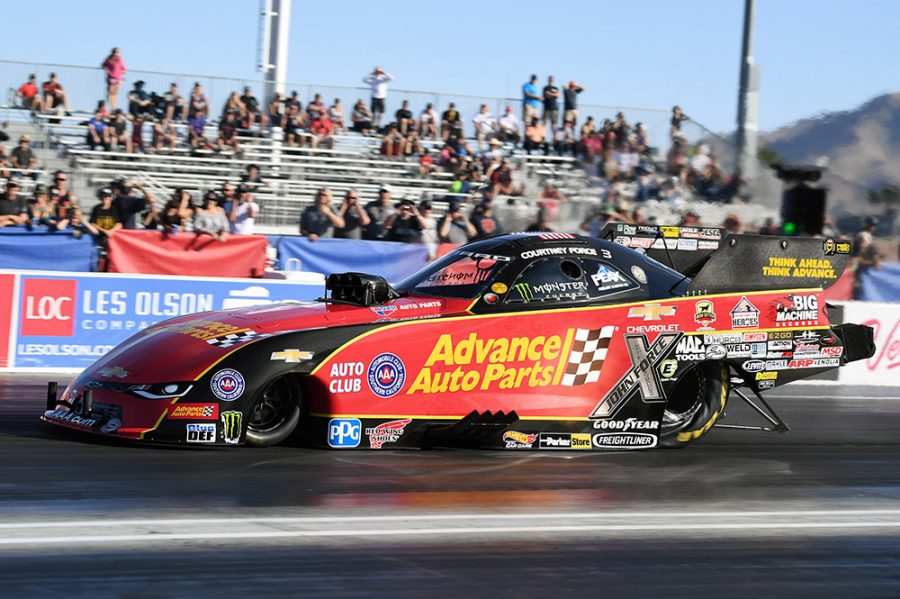 LAS VEGAS (Oct. 26, 2018) — At the end of two qualifying sessions, Courtney Force leads John Force Racing at The Strip at Las Vegas Motor Speedway. Force will continue qualifying on Saturday from the No. 2 position with points leader Robert Hight right behind her in third and her father John Force in fifth. Her sister, reigning world champion Brittany Force, is the provisional No. 3 qualifier in Top Fuel.

Courtney Force came off the trailer and powered her Advance Auto Parts Chevrolet Camaro to a 3.926-second pass at 328.46 mph to earn two bonus points for being second quickest of the session. In the second session, Force was consistent running another 3.926 but at 325.61 mph to be quickest of the session and that earned her three additional points.

The consistency is welcomed for the regular season points leader who has admittedly been suffering from some mechanical gremlins through the beginning of the Countdown. Force is racing for her first No. 1 qualifying position at the NHRA Toyota Nationals and second at The Strip.

“To be back at The Strip here at Las Vegas feels pretty dang good. We are getting some good points and that is what we came out here to do. We picked up five of the six available bonus points and that’s important,” Force said. “We still have a shot at the championship and we are not going to let it out of our sights. So, a good start to the weekend for us, but we have a long way to go.”

Points leader and defending Funny Car world champion Robert Hight started his day with a strong run in the opening qualifying session. The Automobile Club of Southern California Chevrolet Camaro ran 3.927 seconds at 328.38 mph which positioned the two-time NHRA Toyota Nationals winner in the No. 3 spot heading into the afternoon session.

With consistent track temperatures Hight and his crew chief duo of Jimmy Prock and Chris Cunningham got aggressive. They tuned his Camaro Funny Car up to make a run at the top spot in qualifying unfortunately they had a little too much power for the concrete race track. Hight’s Funny Car smoked the tires just past half-track. It was a valiant effort and the team now knows where the tuning “edge” is for two more qualifying sessions tomorrow.

“We were definitely getting after it on that run in Q2. It almost went but we just overpowered the track. I think it would have run at least 3.89. We were able to be aggressive because we made a solid run to start qualifying. We were third quickest and picked up a bonus point. All those points add up and I am proud of this Auto Club team. Vegas is a great place to race and I am excited to get back to the track tomorrow and see if we can run quicker.”

Coming off a No. 1 qualifier and a runner-up finish at the most recent race in Charlotte, Brittany Force and her Monster Energy Top Fuel dragster are third off the efforts of their 3.747-second pass at 328.94 mph. Force opened qualifying with a 3.842 pass at 314.31 after dropping a cylinder.

“That felt like a great run. I think we have really turned this car around over the last two or three races. It takes a few races to get some things ironed out and you saw the big improvement in Charlotte when we raced to the final. We are off to a great start this weekend,” Force said. “We made two solid qualifying passes. In the first session we ran 3.84 and we stepped way up in the second session with a 3.74. The conditions are great here in Las Vegas. We are sitting in the No. 3 spot right now and we get two more shots tomorrow. The biggest thing right now is staying in the top half of the field, getting as many bonus points as we can and going out and winning this race on Sunday.”

Sixteen-time champion John Force will continue his qualifying efforts from the No. 5 spot thanks his second session pass of 3.939-seconds at 330.23 mph, the fastest speed in the Funny Car and Top Fuel classes. It was an improvement from the PEAK Coolant and Motor Oil Chevy Camaro’s 4.007 pass at 300.06 mph from earlier in the day. After a tumultuous year, Force and his PEAK team have started to turn a corner and find some consistency.

“(Crew chief) Jon Schaffer is doing a great job, Ronnie Thompson as well. This thing is starting to come around and working with everybody. We have struggled all year, been the worst year I have probably ever had, but that is what its all about,” explained Force. “I have had good years, I have had bad ones, and it’s a fight to get back, but this is Vegas and this is where you want to show your stuff. As far as the Countdown, I am not in it, but I’m still running in it.”

Qualifying at the NHRA Toyota Nationals continues Saturday with two sessions at 12:30 and 2:45 p.m. Eliminations are slated for 11 a.m. on Sunday.