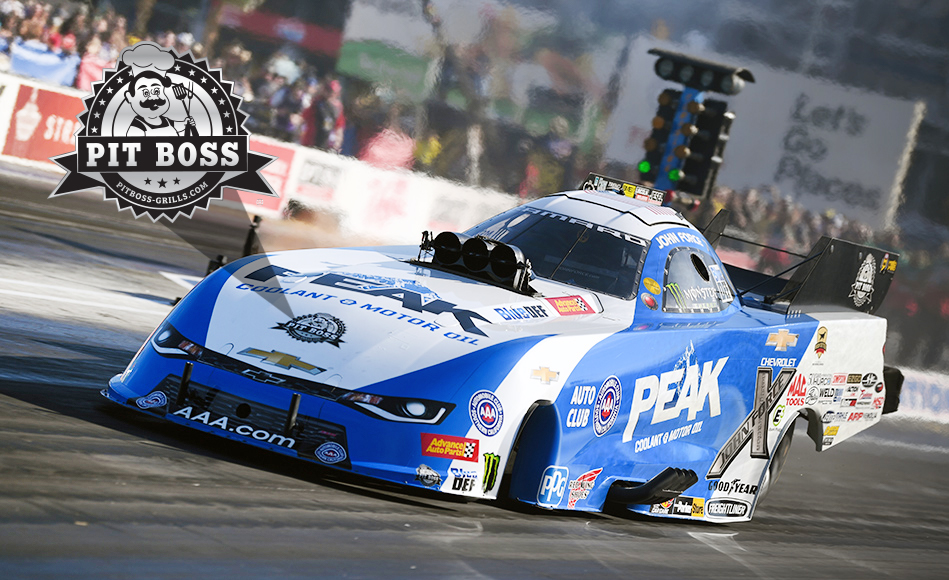 YORBA LINDA, Calif. (Nov. 2, 2018) — John Force Racing, the 20-time NHRA world championship winning team, and Pit Boss Grills announced a multi-year agreement today that will add one of the fastest growing grill brands to the fastest team in motorsports. The marketing partnership, which will officially begin in 2019, will strive to elevate Pit Boss Grills’ brand awareness across the 24-race national NHRA schedule.

Sixteen-time Funny Car world champion, John Force is racing with the Pit Boss logo on his PEAK Antifreeze and Coolant Chevrolet Camaro for the final two races of the NHRA 2018 season. These races include the most recent event in Las Vegas and the upcoming Auto Club NHRA Finals in Pomona, Calif.

“The NHRA and John Force Racing are all about family and having fun,” said John Force, CEO of John Force Racing. “We spend almost all our weekends together at the race track and when we aren’t on the road we are still getting together – usually in our backyard, grilling. I love spending time with my kids and grandkids. This is the kind of partnership that is a perfect match.”

Dansons, whom manufactures Pit Boss Grills, was founded in 1999 and provides its customers with world class, competitive and innovative products across its lineup. These products include wood pellet grills (which are the fastest growing segment in the market), charcoal grills, spices and accessories, as well as gas grills and vertical smokers.

“We are excited to work with John Force Racing,” mentioned Jeff Thiessen, President of Pit Boss Grills. “Not only are they family oriented, but they are a value oriented team as well, and we are blessed that such a great team wants to partner with us on this journey.”

The 2019 NHRA Mello Yello Drag Racing Series will begin with the 59th annual Lucas Oil NHRA Winternationals, February 7-10, and will be broadcast on FS1.

Pit Boss Grills is a subsidiary of Dansons which was founded in 1999 by Dan Thiessen and his two sons, Jeff and Jordan. Pit Boss Grills is known for their durability and craftsmanship, as well as for their family style and approach to business. From portable grills like the Pit Boss Tailgater, to massive grills like the Pit Boss Austin XL – Pit Boss is honored to create whatever the customers (and employees) dream up. Leading the path of innovation, Pit Boss Grills’ products are Bigger. Hotter. and Heavier. than the competitions. Last year, Dansons was awarded EY Entrepreneur of the Year (2017).

For more information about Pit Boss Grills, please visit the website at: https://pitboss-grills.com/.