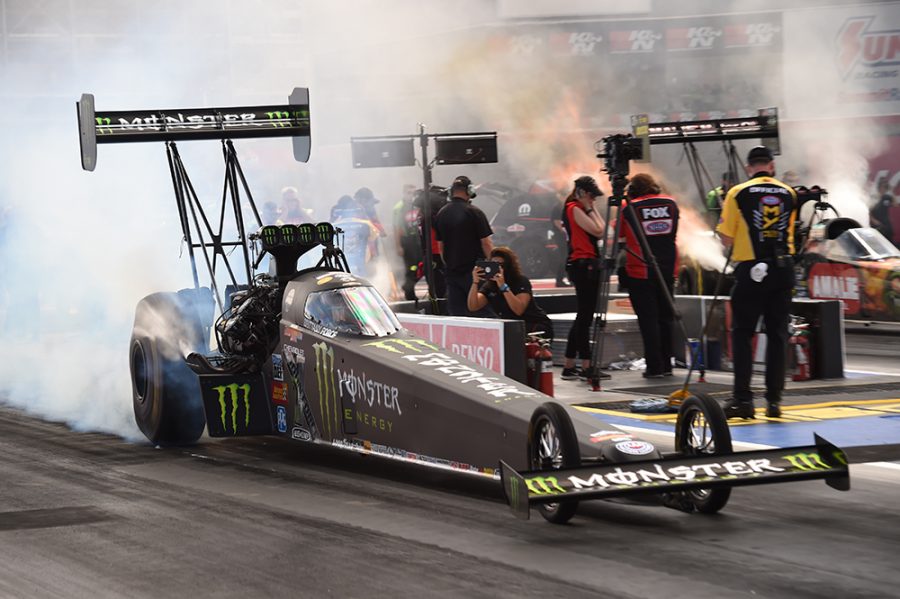 BAYTOWN, Texas (April 18, 2018) — Brittany Force, pilot of the Monster Energy Top Fuel dragster, is hungry for her first win of the season to come at the NHRA SpringNationals, the fifth event on the NHRA Mello Yello Drag Racing Series schedule.

After an intense crash at the Winternationals, Force has been climbing back to the top and back into championship form. She raced to the No. 3 qualifier at the most recent event, the inaugural Las Vegas Four-Wide Nationals, but had a first round finish after pedaling her dragster, a technique she hadn’t used since the crash.

“That pedal definitely took me back to Pomona. It was race day. It was game on and we were looking for a win. What happened in Pomona is behind us and we are ready to fight it out for that first win of the season. When it wasn’t running smooth and it smoked the tires I pulled my foot out of it and made sure I let it settle. That is the one thing I learned coming out of Pomona. You have to make sure the car is completely settled. I got back on it and it started to go. I think it was a good pedal job on my end but it wasn’t enough to turn on a win light,” explained Force.

At the Gatornationals in Gainesville, Fla., she recorded her most impressive pass since the accident during the first round of eliminations, it was the third best time in the first round but, unfortunately, she was racing the quickest in the round and wasn’t able to get the win light.
Prepared to debut a new dragster at the SpringNationals, all signs are pointing up for the reigning Top Fuel World Champion.

“I was in Indy for a few days for the final fitting on our new car. I’m excited to get out to Houston and make the first few passes in it and get comfortable in it. The plan is to go rounds all day on Sunday and bring home that first win of the season,” Force said. “I have a great group of guys on my Monster Energy team and I am proud to be out here with them. These are the same guys from last season when we won the championship. Looking for that first win of the season, Houston would be a great place to pick that win up. Vegas didn’t work out for us but we are ready.”

Force is competing to become the seventh different John Force Racing driver to win at Royal Purple Raceway just outside of Houston in Baytown, Texas and the first to do so in a category other than Funny Car. Previous John Force Racing winners at the SpringNationals include Ashley Force-Hood, Mike Neff, Courtney Force, Tony Pedregon, John Force and Robert Hight.

Qualifying at the NHRA Spring Nationals at Royal Purple Raceway in Baytown, Texas begins with two sessions on Friday at 4:30 and 7 p.m. and continues Saturday with sessions at 1:30 and 4 p.m. Eliminations are set to begin Sunday at 11 a.m. Catch the action on FOX Sports 1 (FS1) with live qualifying at 1 p.m. on Saturday and live finals coverage beginning at 2 p.m. Sunday.