BRITTANY FORCE GOES NO. 1 AND CLINCHES SPOT IN NHRA COUNTDOWN TO THE CHAMPIONSHIP 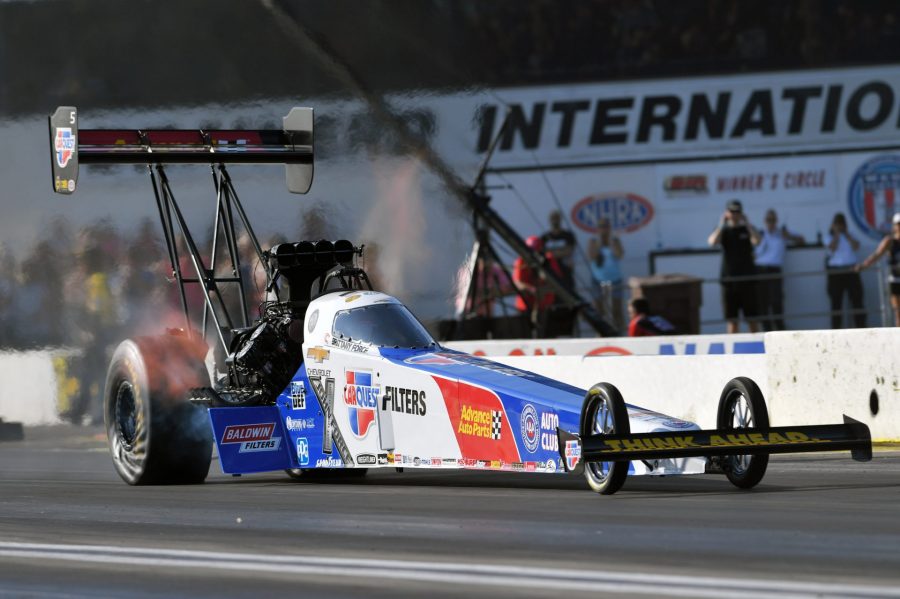 BRAINERD, Minn. (Aug. 17, 2019) — Brittany Force and the Carquest Filters dragster team earned the No. 1 qualifying spot and a guaranteed spot in the NHRA Countdown to the Championship Saturday at the Lucas Oil NHRA Nationals at Brainerd International Raceway. Her legendary father, John Force, moved into the No. 3 spot with the PEAK Coolant and Motor Oil / Lighting Chevy Camaro SS team, Robert Hight and the Automobile Club of Southern California team are starting race day from the No. 4 position, and rookie Austin Prock is ninth with his Montana Brand / Rocky Mountain Twist dragster.

Brittany Force started Saturday’s qualifying on a strong note when she powered her Carquest Filters dragster to a clean 3.803-second pass at 321.88 mph to be third quickest of the session and move into 10th from No. 12. She continued the upward momentum into the last qualifying session where she ran her David Grubnic and Mac Savage tuned hot rod to the stellar 3.772-second pass at 322.65 mph that launched her into the No. 1 spot for the fifth time this season, first time at Brainerd International Raceway and 15th time in her career. Heading into race day, Force will be chasing her second win of the 2019 NHRA season, second at Brainerd International Raceway and 10th of her career.

“It was a clean run all the way down there. This Carquest Filters team is very happy with that. David Grubnic said that we were going to push because we were safe in the field and he was going to see if he could move us up and, wow, he moved us up quite a bit,” said Force who picked up four bonus points in Saturday’s qualifying. “I’m very excited about it. It puts an overall good energy into our pit and gives us confidence going into race day.

“It’s the best spot we could be in and it feels good going into race day like that. The last couple of weekends we’ve struggled a little bit, haven’t been exactly where we want to be and it’s a tough race day,” said Force who will face Chris Karamesines in round one of eliminations. “Taking that No. 1 spot, we have the best set up for tomorrow. We picked up some points and we clinched a spot in the Countdown so I’m excited for tomorrow.”

Racing veteran, John Force and his PEAK Coolant and Motor Oil / Lighting Chevy Camaro SS team started Saturday’s qualifying with a 3.976-second pass at 316.97 mph to be second quickest of the pack and pick up two bonus points. He kept the consistency going into the final qualifying session when he propelled his hot rod to an impressive 3.923-second pass at 321.12 mph. It was the third quickest of the session earning him an additional bonus point and moved him up from the No. 9 position into No. 3. The 16-time Funny Car world champion will compete against Bob Bode in the first round of eliminations.

“We got this PEAK Lighting hot rod in the show tomorrow and I’m happy with it. My crew chiefs Brian Corradi and Danny Hood, they had this thing going down there and we made two good runs today. I just need to do my job tomorrow and go some rounds,” said Force whose won from the No. 3 spot 24 times in his career. “Brittany had a great run with Carquest and they’re No. 1, both Robert and the Prock kid, they’re in too. We all want to get in that winner’s circle tomorrow.”

Two-time Funny Car world champion Robert Hight and the Automobile Club of Southern California Chevy Camaro SS team will head into race day at Brainerd International Raceway from the No. 4 position off their 3.924-second pass at 326.48 mph from Friday night. In Saturday’s first session, Hight smoked the tires to run 4.259-seconds at 220.55 mph to stay No. 3, where he started the day. Hight improved in his last pass to make a 3.945-second pass at 324.05 mph but would move one spot into fourth. Hight is paired with Cruz Pedregon in round one on Sunday.

“We got bumped by the boss in that last round but we’re fourth and that’s not a bad place to be. Obviously, we wanted that top spot but we’re supposed to have good weather tomorrow and I’m confident we’ll get out there and have some solid runs,” said Hight. “Jimmy Prock and Chris Cunningham are continuing to build on what this car can do and our goal is to go rounds tomorrow, get this Auto Club team in the winner’s circle.”

Austin Prock opened Saturday’s qualifying at Brainerd International Raceway with a 4.306-second pass at 192.71 mph after smoking the tires to stay in the No. 7 spot. In his final qualifying round, the first-year driver piloted his Montana Brand / Rocky Mountain Twist machine to a solid 3.786-second pass at 324.36 mph but will start eliminations from the No. 8 position off his 3.769 at 323.35 from Friday night. Prock will face Scott Palmer in the first-round tomorrow.

“We made a solid pass in Q4. We’re right in the hunt with everyone, except Brittany whose home run pass made everyone else look mediocre. I think we have a good race car for tomorrow,” Prock said.

“We figured out what we were doing wrong down track and the conditions are going to be really good tomorrow morning so we’ll be able to get after it. Hopefully we’ll be getting this Montana Brand / Rocky Mountain Twist team another win.”

Eliminations at the Lucas Oil NHRA Nationals begin Sunday at 11 a.m. with finals coverage starting at 2 p.m. ET on FS1.