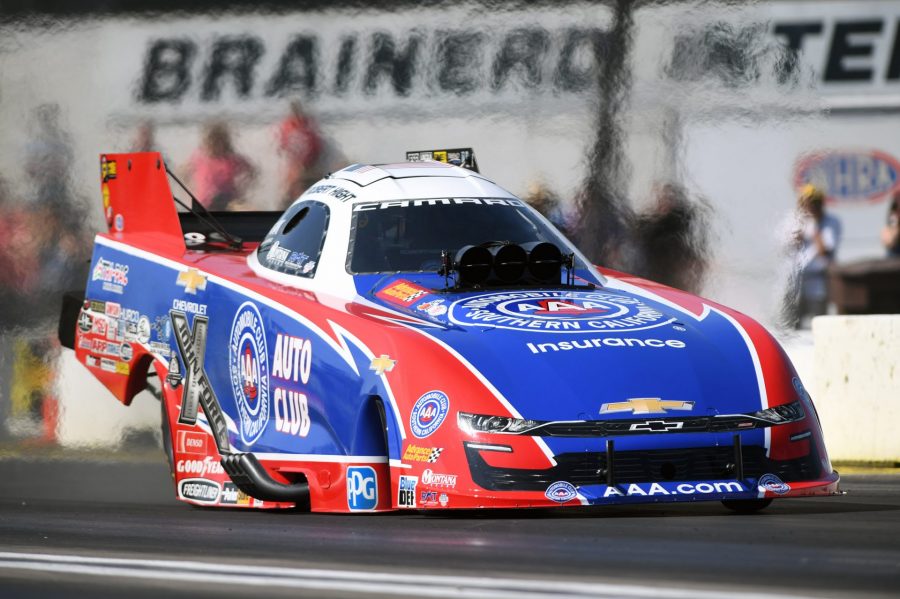 BRAINERD, Minn. (Aug. 18, 2019) — Leaving the Lucas Oil NHRA Nationals at Brainerd International Raceway with a 179-points lead, Robert Hight and the Automobile Club of Southern California Chevrolet Camaro SS Funny Car team will only need to qualify at the Chevrolet Performance U.S. Nationals to secure the No. 1 position in the NHRA Mello Yello Countdown to the Championship, NHRA’s six race playoffs.

It would be the first time in his 15-year career that Hight has won the regular season championship and the fifth time a John Force Racing driver has secured the title. Team namesake John Force held the No. 1 spot going into the Countdown in 2010 and 2014, former driver Mike Neff in 2011 and Courtney Force in 2018.

“I’ve never gone into the Countdown No. 1. You know, its 30 points, and once the Countdown starts, every point is going to matter. We’re going to go up there every single qualifying run and try to get three points or the little points. I lost the Championship in 2007 by 19 points so to go into the Countdown No. 1, it’s ours to lose, I guess. If you don’t mess up, it’s yours so I’m proud of my guys for that,” Hight said. “Proud of the first part of the season getting five wins and all the No. 1 qualifiers. Five wins is the most I’ve ever had in a season (ties 2011 and 2014) and I’m going to make a prediction right now that I’m going to need eight or nine to win the championship so that’s going to be a stellar year for the Auto Club Chevrolet. Eight or nine wins, that’s record time stuff.”

Hight and the Auto Club team closed out their race day in the second round at Brainerd International Raceway. Austin Prock and Montana Brand / Rocky Mountain Twist made a semifinal exit after handing Brittany Force and the Carquest Filters team a second-round loss and 16-time world champion John Force and his PEAK Coolant and Motor Oil / Lighting team had an early end to their race day in the first round.

Hight and his two-time world championship team started their day with a solid 3.909-second pass at 328.14 mph to defeat long-time foe Cruz Pedregon and his 3.964 at 309.42 mph. Matched up in a classic John Force Racing versus Don Schumacher Racing battle against Tommy Johnson Jr., Hight and the Auto Club team smoked the tires early to come up short with a 6.034-second pass 115.21 mph to Johnson Jr.’s 3.910 at 323.50.

“Obviously not the kind of race day anyone wants, we wanted to go more rounds, get back our consistency, but that one round win came in handy and locked us into the championship hunt in the No. 1 spot,” Hight said. “We’ll take a week to regroup before things get really busy for the Chevrolet Performance U.S. Nationals. We’ll have a little breathing room knowing we’re locked in to that top spot but everyone wants to win Indy no matter where they are in the points and that’s the same for us.”

Austin Prock and the Montana Brand / Rocky Mountain Twist team opened race day with a round one victory over Scott Palmer. Both racers shook the tires but Prock was able to pedal his hot rod to a 4.002-second pass at 299.33 mph bettering Palmer’s 9.253 at 92.79. In the second round, Prock was paired against teammate Brittany Force in what was an impressive side-by-side drag race by both drivers. Prock, however, was able to power his way to next round on a holeshot win when he laid down a 3.766-second pass at 328.46 mph to defeat Force’s 3.730 at 331.77.

The first-year driver headed to the semis where he faced eventual event winner Leah Pritchett. Prock fell short of making his second finals appearance after hazing the tires for a 4.532-second pass at 226.77 mph that was no match for Pritchett’s clean pass of 3.725 at 327.27.

“Another good day. I had a great points day. Everyone we’re fighting with in the top 10 went out first early, we made it to a semifinal appearance,” said Prock who is sitting eighth in the NHRA Mello Yello points standings. “We fell short to Leah Pritchett; she made a really good run and had a good reaction time. That would have been tough to beat but we’ll get them next weekend.”

After laying down a killer 3.722-second pass at 328.14 mph to steal the No. 1 qualifying position on Saturday evening, Brittany Force handled her Carquest Filters dragster to a 3.728-second pass at a blistering 332.75 mph that would hold up to be the fastest of the event to defeat veteran racer Chris Karamesines in the first round. The win set Force up to face teammate Austin Prock in the second round. It was a clean side-by-side drag race for the Top Fuel tandem. Force would run 3.730-seconds at another stout speed of 331.77 mph but would come up short base on reaction time to Prock’s 3.766 at 328.46.

Force’s weekend is highlighted by her guaranteed spot in the NHRA Countdown to the Championship which she earned during qualifying at Brainerd International Raceway. Her second-round finish also moved her into second in the point standings as she enters the final race of the NHRA regular season and the biggest race of the year, the Chevrolet Performance U.S. Nationals held in Indianapolis, Ind.

“Tough weekend for the Carquest Filters team out here in Brainerd. The team is doing awesome. The car is running well; I just need to get my head back in the game. I’m a little lost but I have the best support system around me with my guys, David Grubnic and Mac Savage, and all of John Force Racing,” said Force. “We’ll get it figured out when we need to, and that’s heading into the Countdown, which we’re one race away from. I’m feeling confident. We’ve secured a spot in the Countdown. We’re currently sitting No. 2 and we’ll be ready to attack when we need to.”

Sixteen-time Funny Car world champion John Force had an early exit Sunday when he was matched against Bob Bode in the first round of eliminations. Force, who had Bode at the light, experienced a malfunction in his PEAK Coolant and Motor Oil / Lighting Chevy Camaro SS that caused him to shake the tires and shut off. He would cross the finish line at 12.298-seconds and 72.89 mph while Bode ran 3.980 at 321.27. The first-round exit puts the driving veteran at just third in the Mello Yello points standings.

“I had a rough morning, had a clutch failure and stuff happens so I’m ready to move on. I made the Countdown in Seattle, Brittany locked it in here and Prock still has a pretty good shot at locking it in and Robert’s in the lead,” Force said. “I’m going into Indy in third place. It’s not what I wanted. I have a new sponsor, Tri-Pac and you know, I wanted to do better for them but we’ll see where it goes.”