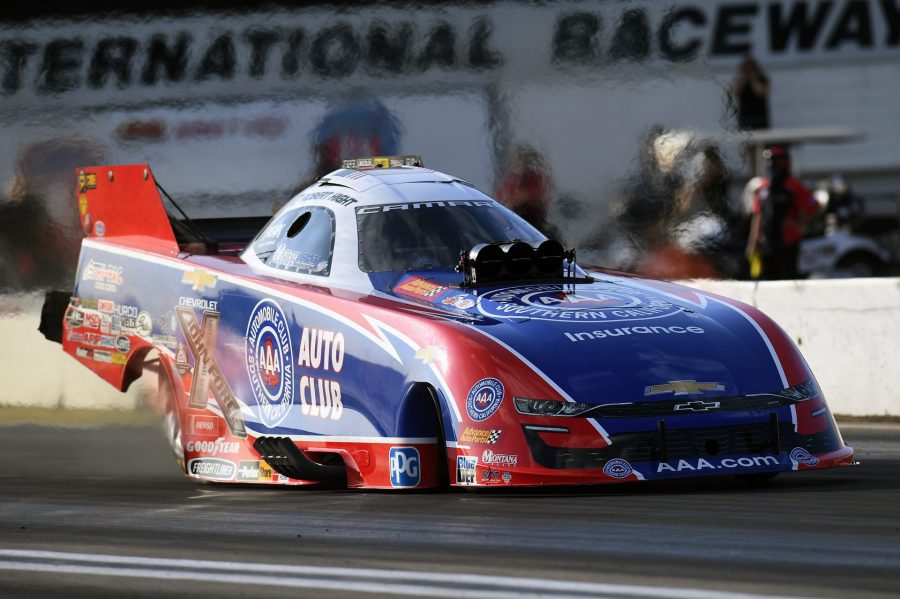 Looking to pick up his sixth win of the season and second at the facility, two-time Funny Car world champion Robert Hight ran his Auto Club Chevy Camaro SS to a solid 3.924-second pass at 326.48 mph for the No. 3 position in the second qualifying session. The veteran driver earned one bonus point as he improved from his first run of 4.323-second pass at 213.27 mph after hazing the tires.

“We had a rough start to qualifying, had some tire smoke, but we were able to turn things around in that second pass and move four spots into third. We want to be in that No. 1 spot though so we’re going to fight to get it tomorrow,” Hight said. “The weather looks good too so I think we can get it done. We’ve made some respectable runs over the last few races and we want to keep building on that, so I know Jimmy Prock, Chris Cunningham and my Auto Club guys will get this thing going down there. I’m ready.”

Austin Prock, who took home his first Wally at the recent event in Kent, Wash., piloted his Montana Brand / Rocky Mountain Twist hot rod to a clean 3.769-seconds at 323.35 mph during Friday’s evening session. His efforts moved him up two spots after his dragster smoked the tires to 4.493-seconds and 176.12 mph in the first qualifying round.

“Solid effort today for my Montana Brand / Rocky Mountain Twist team. Almost made it all the way down Q1. We were shooting for a 3.80 and that would have put us right at the top of the heat there with Billy Torrence. It just came loose, no signal, didn’t lock into any tire smoke, just wifted them off up there. It’s a little porous down track in the at right lane and it’s tough to get down,” Prock said. “Moving over to the left lane tonight we had a good rebound run, a .769. If we had run a .763 we would have been fourth but we’re seventh so we’re right in the hunt. Car was nice and smooth tonight no tire quiver, no nothing, just right down Broadway. Good run for my Montana Brand team and we’re going to try and improve tomorrow.”

After achieving his milestone 150th career win at the Northwest Nationals, sixteen-time Funny Car world champion John Force started qualifying with the quickest pass of the session when he ran his PEAK Coolant and Motor Oil / Lighting Chevy Camaro SS to a solid 3.993-seconds at 321.19 mph. In the second session, Force stayed consistent making a 3.963-second pass at 319.37 mph but would be pushed down the order to start Saturday’s qualifying from the No. 8 spot.

“The No. 8 spot, that’s not too bad and my guys gave me a consistent car. We ran .99 and .96 but that last qualifying round, everyone improved. It was competitive,” said Force who picked up three bonus points from his first run. “Tomorrow we’re looking to get better and move up, but we’ll see how things go. This PEAK Lighting team is working hard.”

In her first qualifying pass of the weekend, Brittany Force had a 3.906-second pass at 274.11 mph after dropping a cylinder and shutting her 11,000-horespower Carquest Filters machine off early. The 2017 Top Fuel world champion had trouble in her second run when her dragster started to smoke the tires down track for only a 4.282-second pass at 188.75 mph. Force will start tomorrow’s qualifying sitting in 12th.

“Currently sitting 12th with our 3.90 in Q1. Tomorrow’s conditions are looking better so we should be able to run better than we did today,” Force said. “We want to move up, move into the top half and ultimately the goal is to be top five before going into race day. So, this Carquest Filters team will be looking for a good day tomorrow, two solid runs to set us up for a good day on Sunday.”

Qualifying for the Lucas Oil NHRA Nationals continues Saturday with nitro sessions at 2 p.m. and 5 p.m. Eliminations are scheduled for 11 a.m. on Sunday. Television coverage will continue on FS1 with Saturday Nitro Live at 11 p.m. ET and eliminations on Sunday will air at 2 p.m. ET.