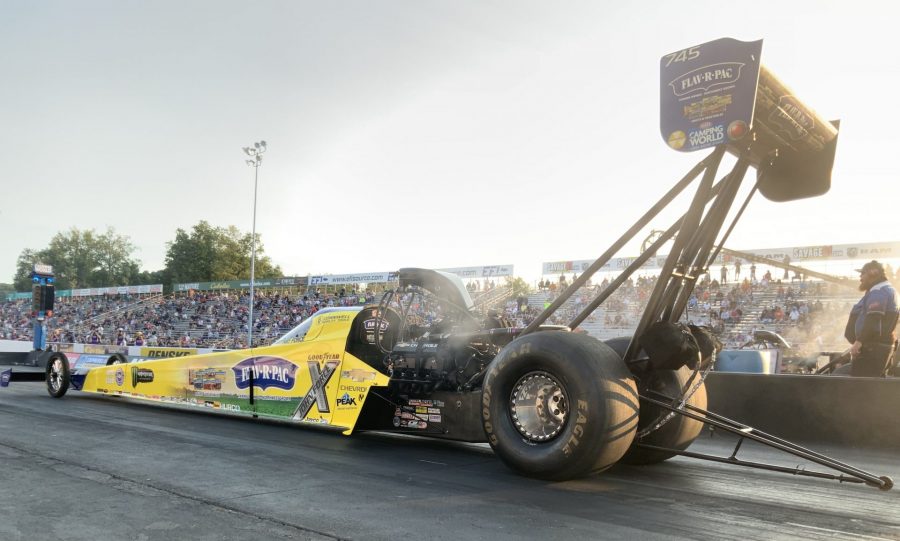 Looking to take their seventh consecutive and ninth overall No. 1 qualifying position this season, Brittany Force and the Flav-R-Pac team blasted to a 3.666-second run at a track record speed of 335.57 mph to earn three bonus points and narrow the gap to the top spot.

“That run felt fast. That finish line came up quick. But it feel good to be able to fun like that the first qualifying PASS OF the weekend and grab that No. 1 currently. It gives confidence and helps us feel strong going into tomorrow,” Force said. “This Countdown has begun right here in Reading, Pa. SO everything is on the line right now. We have to do that we have to repeat that the rest of the weekend.”

Coming into the Countdown to the Championship, NHRA’s seven race playoffs, siting in the No. 6 spot, Robert Hight and the Auto Club Chevy wasted no time collecting points earning three bonus qualifying points for being quickest Friday night. The three-time world champion’s 3.883-second run at 330.39 mph put the Auto Club team No. 1 heading into two more qualifying sessions on Saturday.

“We’ve actually been making a lot .80 runs. Testing Monday in Brainerd really got this Auto Club Chevy back to where we need to be. Jimmy Prock and Chris Cunningham have a good handle on how to make this Camaro run,” Hight said. “The trick is going to be tomorrow, when it warms up a little bit, and Sunday is going to be even warmer. That’s what’s going to be the trick.”

“Not the run we wanted, obviously, but we’ll be okay. This PEAK Chevy with Danny Hood and Tim Fabrisi, we’ll be okay. We’ve got two more tries tomorrow and we’ll see how it goes,” Force said. “Brittany over there with Flav-R-Pac and Robert too with Auto Club, their running good. So that’s good and we’ll just have to catch up.”

The Mopar Express Lane NHRA Nationals at Maple Grove Raceway continues Saturday with qualifying sessions at 1:15 and 4:45 p.m. Eliminations are slated for 11 a.m. Television coverage begins Sunday at noon ET with qualifying and continues with eliminations at 2 p.m. ET on FOX Sports 1 (FS1).