THE STREAK CONTINUES FOR BRITTANY FORCE AND FLAV-R-PAC WITH NO. 1 SPOT SATURDAY AT MAPLE GROVE RACEWAY 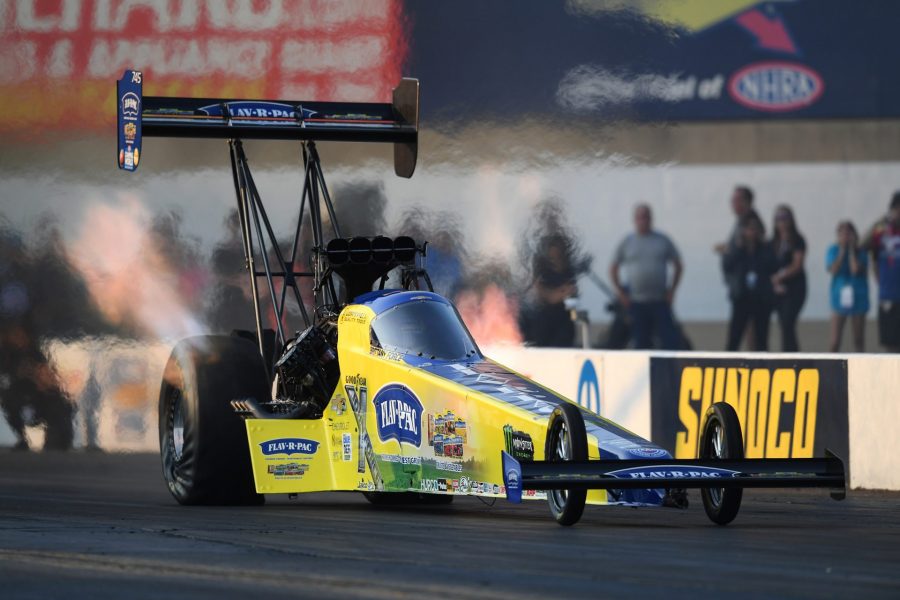 READING, Pa. (Sept. 11, 2021) – For the seventh consecutive time, ninth time this season and the 29th time in her career Brittany Force and the Flav-R-Pac Top Fuel dragster team have secured the No. 1 qualifying position Saturday at the Mopar Express Lane NHRA Nationals at Maple Grove Raceway. Robert Hight and the Automobile Club of Southern California Chevrolet Camaro SS landed in the No. 2 spot while John Force and the PEAK Antifreeze and Coolant Camaro are No. 11.

Already with a tight grip on the No. 1 qualifying position after going 3.666-seconds at a track record speed of 335.57 mph, Brittany Force and the Flav-R-Pac / Monster Energy team continued to flex their muscle improving their performance to a 3.660-second pass at 334.07 mph during Saturday’s opening qualifying try. In the third and final qualifying session, Force had another solid pass at 3.689-seconds and 331.77 mph.

“This Flav-R-Pac Monster Energy team, we’re feeling good. Seven straight No. 1s, that’s pretty impressive. Looking at today and yesterday, though, that Q2 run that we had today, to be able to step it up to a 3.66, that’s pretty outstanding. That was a big run for us, in the heat of the day, that’s what we’re going to be up against tomorrow on race day. So that’s the run I’m most excited about,” said Force who’s track record speed goes with her national record elapsed time of 3.623-seconds set at the facility in 2019. “We laid three solid passes down the race track so I’m proud of this team and ready to get this countdown going. We’re in a great place and we’ll see what we can do tomorrow” “

Robert Hight and the Auto Club Chevy entered the day No. 1 off their Friday evening run of 3.883-seconds and 330.39 mph. The three-time world champion drove into tire smoke during Saturday’s first session for only a 5.068-second run at 149.55. The Auto Club team found their stride again in the last session of the day going 3.899-seconds at 322.27 mph. Unfortunately, Hight was bumped from the No. 1 qualifying spot just before his final qualifying try.

“I feel you’re going to have to win at least three races in the Countdown to win this championship. And this Auto Club team needs to start right here at Maple Grove tomorrow,” Hight said. “We have to be aggressive. There’s a lot of good cars both infront and behind us. There’s no time to play defense, we’ve got to play offensive. Be aggressive but make good runs. My guys know how to do that. If we go out there and do what we know how to do, we can win this championship but we have to put it all together and we have a short amount of time to do it.”

John Force and the PEAK Camaro, sitting No. 11 after Friday, continued to struggle during Saturday’s opening session once again driving into smoke to record a 4.907-second run at 164.81 mph. Force and his Danny Hood and Tim Fabrisi tuned Chevy picked things up in the final session to go 4.096-seconds and 256.84 mph but had issues down track. Force will start race day from No. 12.

“We had some problems but we’re figuring it out. We’ll be okay for tomorrow, it’s a new day, weather will be warmer. We just have to go out there and do our jobs,” Force said. “Danny Hood and Tim Fabrisi and all the guys, this PEAK Camaro team, they’ll give me a good car and I just need to drive it, go rounds and get in the winner’s circle for PEAK, Chevrolet, Cornwell Tools, Baldwin Filters, ParkerStore and all my sponsors.”