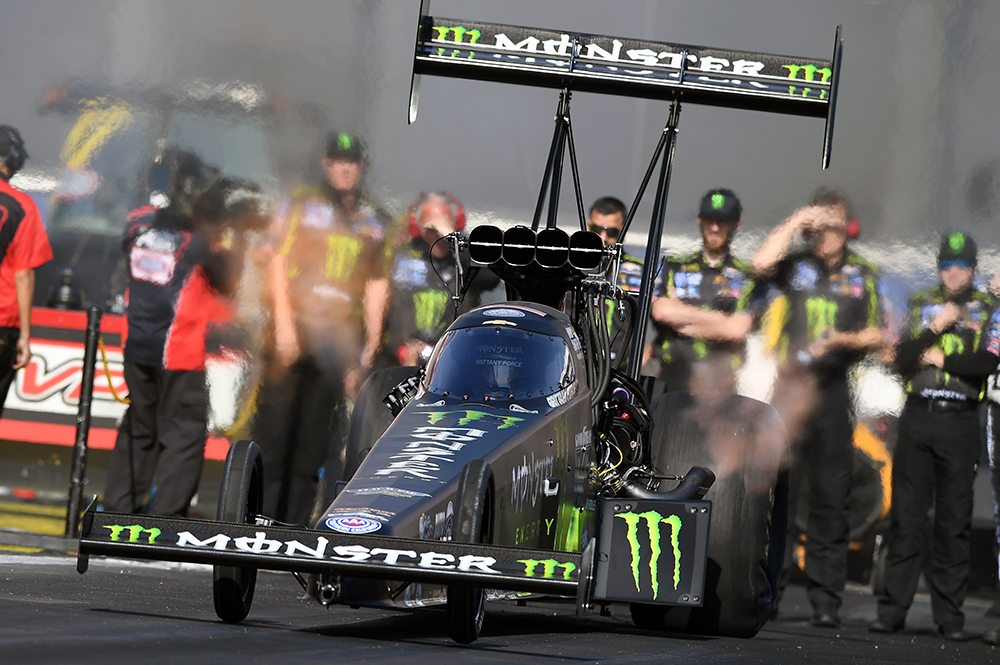 POMONA, Calif. (Feb. 7, 2020) – Brittany Force and the Monster Energy dragster landed in the No. 2 spot after two qualifying rounds on Friday night at the Lucas Oil NHRA Winternationals at Auto Club Raceway at Pomona. Reigning world champion Robert Hight sits in the No. 3 spot with the Automobile Club of Southern California Chevrolet Camaro SS Funny Car while John Force and the BlueDEF Chevy Camaro SS sit in No. 11 and Austin Prock with Montana Brand / Rocky Mountain Twist team are No. 12.

Just a week after ending pre-season testing in Las Vegas, where the David Grubnic and Mac Savage led team made no full pulls, the Monster Energy dragster rocketed to a 3.706-second pass at 329.10 mph out running the rest of the Top Fuel pack for three bonus points. In her second go at the iconic raceway, Force’s dragster overpowered the track and smoked the tires for a 6.314-second run.

“We’re out here at Pomona, first race of the season, and already off to a great start,” Force said. “We made a good run earlier, a 3.70 with David Grubnic, Mac Savage and the Monster Energy boys and went to the No. 1 spot. We got bumped down just one spot on that last run but we had that opportunity to push it hard and see what we can do and we fell short. We get two runs tomorrow and I’m looking forward to going some rounds on race day and getting this thing in the winner’s circle.”

In his first qualifying run, three-time Funny Car world champion Robert Hight handled his Auto Club Chevy Camaro SS to a solid 3.890-second pass at 330.31 mph to be third quickest of the session earning him a bonus point. The 16-year racing veteran continued to keep things consistent when he earned three bonus points as quickest of the night with a 3.885-second pass at 330.31 mph. Hight ended day one of qualifying at the Winternationals in the No. 3 spot.

“We had a good start today. Any time you can make two runs and get points, the little qualifying points every run, you’re in a good spot,” Hight said. “We ran in the .80s both runs and the good news is, we’re not even close to where we need to be so we’re going to get after it tomorrow and try and get the top spot.”

Sixteen-time Funny Car world champion John Force and the BlueDEF Chevy Camaro SS team struggled in the first two qualifying sessions on Friday. In his first run, Force smoked the tires and pedaled his 11,000-horsepower hot rod to a 4.130-second pass at 302.28 mph. Then, in the second session, lost traction and shut off to cross the finish line at 8.504-seconds and 80.38 mph. He’ll enter the second day of qualifying in the No. 11 spot.

“It’s good to be back at the Winternationals. I’m running the BlueDEF colors, Robert with Auto Club, but Monster Energy is back and so is Frank Tiegs with Flav-R-Pac, and of course with Montana Brand and the Prock kid. I’m excited but 11th isn’t where I want to be,” Force said. “But Robert is up at the top and Brittany is too. Prock is in. We’re all in. Tomorrow is the second day of qualifying so I’m ready to get after it and have some fun, entertain the people.”

After a promising test session, the Montana Brand / Rocky Mountain Twist team will head into day two of qualifying sitting No. 12. The Mike Green and Joe Barlam tuned team smoked the tires on their first run for a 5.792-seconds at 110.95 before putting up 4.361 at 195.03 on an unfamiliar feeling run for the 2019 Road to the Future Award winner.

“We had a productive first day. In the first run we needed a little bit more clutch-ware and we smoked the tires. Then, second run, it was on a really good run but the tires started to quiver and the tail of the car started washing out and I thought it was going to go in smoke and I lifted and right before I lifted the tire actually started to hook back up,” Prock explained. “We probably would have made it but just a non-rookie, rookie mistake. It was something I’d never felt before and you know, these things have 11,000-horsepower so you’re constantly learning but I have that in the back of my head and next time I’ll be able to drive through it. The guys did a great job and the crew chiefs did everything they wanted to do, so I’m looking forward to tomorrow.”

Qualifying at the 60th annual Lucas Oil NHRA Winternationals continues Saturday with two sessions at 1:30 p.m. and 4:00 p.m. Fans can catch all the action with television coverage beginning at 7 p.m. ET on FS1. Eliminations are slated for 11 a.m. on Sunday with FS1 coverage beginning at 5 p.m. ET.