BRITTANY FORCE AND MONSTER ENERGY TAKE NO. 1 SPOT SATURDAY AT THE NHRA WINTERNATIONALS 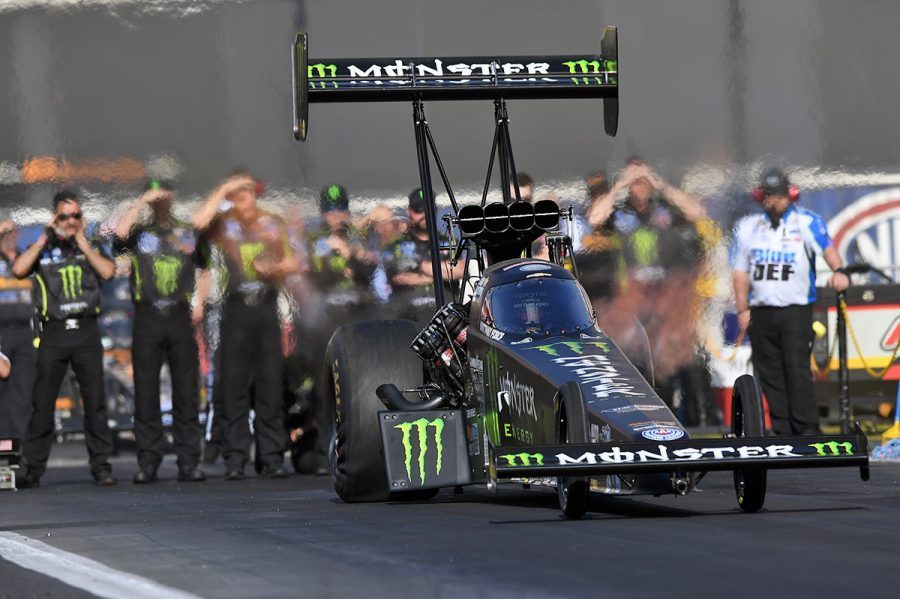 Brittany Force, the 2017 Top Fuel world champion, strung together three strong passes through two days of qualifying at the season-opening Winternationals that ended with her landing the first No. 1 qualifier of the season, the 19th of her career and second at Auto Club Raceway at Pomona.

In her first pass Saturday, Force powered her Monster Energy machine to a stout 3.686-second pass at 332.51 mph to be quickest of the session and pick up three bonus points. Force continued to dominate the Top Fuel field in the final qualifying round when she handled her 11,000-horsepower machine to 3.657-seconds and 334.32 mph and lock in the No. 1 qualifier spot.

“That was an incredible pass for this team. It’s the first race of the season and I’m excited to be out here at Pomona. We’re back with Monster Energy and we have Flav-R-Pac, a new sponsor that came from Austin Prock’s car, Montana Brand with Frank Tiegs, so I’m excited to be out here with the same team, David Grubnic, Mac Savage and the Monster Energy boys,” said Force who will have a bye run first round. “To come out this weekend and run consistent all weekend long, we knew we were able to push on that last run. We were safe in the show so Grubnic said we were going to push it, see what it could do. A .65 came up on the board and I wasn’t expecting that so it’s pretty incredible and I’m ready to go into race day tomorrow.”

Entering Saturday qualifying in the No. 12 spot, Austin Prock and the Montana Brand / Rocky Mountain Twist team turned things around in the final qualifying session. The third-generation racer blasted his Mike Green and Joe Barlam tuned hot rod to a career-best 3.680-second pass at 330.72 mph to jump 10 spots into the No. 2 qualifier position. The impressive run came after Prock smoked the tires in his first pass Saturday to cross the finish line at 6.217-seconds and 98.77 mph.

“This Montana Brand/ Rocky Mountain Twist team had a great second day of qualifying. The car has been trying to run hard all weekend. We had a few problems yesterday, but we got them sorted out this morning and it was really close to going Q3,” said Prock who picked up two bonus points and will face Cameron Ferre in the first round. “We got all our ducks in a row for Q4 and went down and laid down a really nice number. We led the class there for a couple pair until our teammate Brittany one-upped us. For Frank Tiegs and John Force Racing, to have both of our cars right up front, it’s a good weekend for us so far. Just need to go some rounds tomorrow.”

With three consistent qualifying runs, Robert Hight and the Auto Club team will be starting the first race day of the 2020 season from the No. 3 spot. After tire smoke and a 5.838-second pass in the third session, a stout 3.862-second pass at 331.45 mph on Saturday evening momentarily put the Jimmy Prock and Chris Cunningham tuned hot rod in the top spot. Hight would ultimately be third quickest of the session and earn a bonus point, for a total of five over the four sessions.

“We were pushing a little too hard the first run. The conditions weren’t there. Tonight, they were, and we didn’t push hard enough. We for sure could have run better than .86. There’s no doubt in my mind,” said Hight who is looking for a back-to-back win at the Winternationals when he faces Terry Haddock in round one of eliminations. “It wasn’t a bad day. We made three runs in the .80s through qualifying and we’ll take that. If we do the same during race day, I’m confident we’ll pick up the win.”

After two unsatisfying qualifying tries on Friday, John Force and the BlueDEF team came out on Saturday to run a clean 3.933-second pass at 320.43 mph. The positive momentum continued Saturday evening when they laid down a 3.889-second pass at 322.04 mph that moved the Chevy Camaro into the No. 5 qualifying position, where he’ll matchup with Bob Bode in the first round,

“Fast race cars today, we’ve got four of them. Our sponsors are all happy, Monster being back with Brittany, great way to start the year. Frank Tiegs with Montana Brand and coming on with Brittany’s new sponsor for part of the year, Flav-R-Pac. Auto Club has been with me forever really have to thank them. ‘When you’re chasing new money don’t forget old money.’ Tom McKernan with Auto Club taught me that, smartest man I know. They’re looking good over there with the champ, Robert, and myself with BlueDEF, we ran good,” Force said. “I’m looking forward to tomorrow, I feel good. I feel great.”

Due to pending weather conditions, eliminations at the 60th annual Lucas Oil NHRA Winternationals have been moved up to begin at 10 a.m. on Sunday with FS1 coverage beginning at 5 p.m. ET.