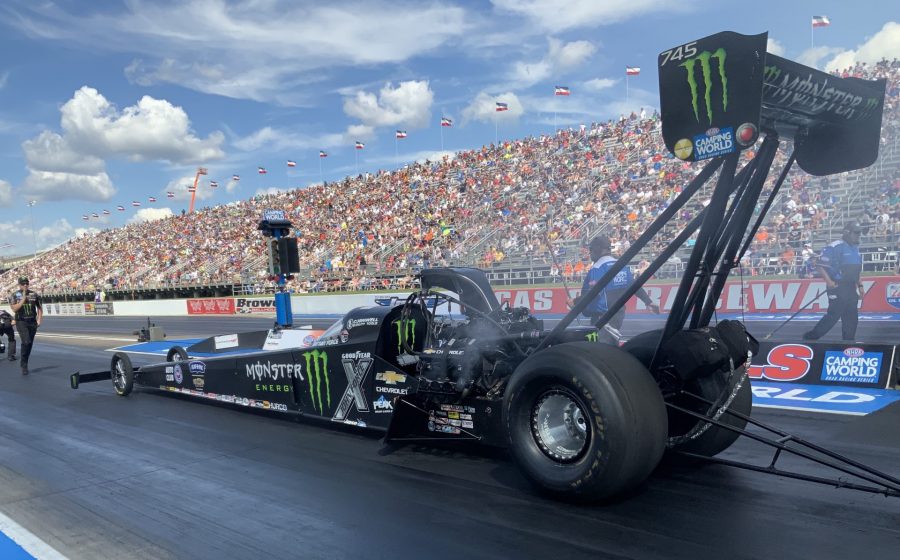 INDIANAPOLIS (Sept. 05, 2021) – After a doom and gloom Saturday that saw no racing, Brittany Force and the Monster Energy / Flav-R-Pac team capped off their Dodge//SRT NHRA U.S. Nationals weekend with a runner-up finish Sunday at Lucas Oil Raceway. Robert Hight and John Force would take the Automobile Club of Southern California and PEAK Antifreeze and Coolant Chevrolet Camaro Funny Cars to the quarterfinals.

Riding the momentum of her eighth total and sixth consecutive No. 1 qualifying position of the season, Brittany Force and the Monster Energy team defeated Shawn Langdon in the first round of eliminations. The 2017 world champion’s 3.702-second run at 332.34 mph pushed her into the quarterfinals after Langdon ran into trouble early for only a 10.623-second pass.

In the second round, Force matched-up with Top Fuel newbie Alex Laughlin. Force would have another clean run at 3.759-seconds and 325.53 mph while Laughlin would go only 8.621 at 84.58. The win set Force up to race against rookie of the year candidate Josh Hart in the semis. Hart would go 4.255-seconds at 201.25 mph to Force’s winning 3.748 at 324.75 that would send her to her fourth final round of the season and her first at the prestigious U.S. Nationals.

Mechanical issues had the Monster Energy team in trouble early in the final round against three-time and reigning world champion Steve Torrence. Force would have to handle immediate tire smoke and then shut off early with the parachutes out mid-track to end her battle for her first U.S. Nationals victory. Officially, the Monster Energy dragster crossed the finish line at 13.165-seconds and 24.39 mph while Torrence had a clean 3.749 at 324.44.

“Wrapped Indy, leaving here No. 2 in points which is a great position to be in and we went to a final round. That’s outstanding for this Monster Energy / Flav-R-Pac team. We feel confident going into the Countdown to the Championship. Now that Indy is behind this, all the hard work, everything we’ve learned this year, everything we’ve done, now it’s time to put it to good use and go for this championship,” Force said. “The final round was definitely disappointing. Again, proud to be in that final round and have that No. 1 qualifier coming out of Indy so we can’t hang our heads too low, but it was frustrating. We were right there; we could almost taste it. We had been running in the left lane all weekend long and that right lane was tricky. Unfortunately, it wasn’t our day we didn’t get down there, but our focus now is going into this Countdown and the next seven races.”

Entering the day as the No. 1 qualifier, John Force and the PEAK Chevy started the day with some drama in the first round of eliminations against Dave Richards. The Camaro flirted with the center line, touching but not crossing it on its way to a 4.788-second pass that bettered Richards’ 6.549 at 98.56 after he lost traction early. Force and the PEAK team would have issues at the hit in the second round. Losing traction at the start, Force would go 9.041-seconds at 88.13 mph to eventual race winner Tim Wilkerson’s 3.974 at 297.81.

“My race car, the PEAK Chevy, we couldn’t get it done today but it was fast in qualifying. That right lane was tricky, and it got me in trouble,” said Force who is second in points. “To see the fans come here and pack it, it looked great. Thank you for making the Camping World Drag Racing Series what it is and to make us drivers who we are.”

“That was disappointing, for sure. Not how this Auto Club team wanted to perform at the U.S. Nationals, but we get to move on, reset points and really begin the battle for another championship next weekend in Reading, Penn.,” said Hight who starts the Countdown No. 5. “We’re confident, Jimmy Prock and Chris Cunningham, they’re looking for some consistency and we felt really good after testing in Brainerd. Luckily we get four back-to-back races to build some momentum early in the Countdown.”

The NHRA Countdown to the Championship, NHRA’s seven race playoffs, kicks off with the Mopar Express Lane NHRA Nationals at Maple Grove Raceway in Reading, Penn. next weekend, Sept. 10-12. Points will be reset as the top 10 compete for the ultimate crown, a NHRA Camping World Series world championship.