BRITTANY FORCE AND MONSTER ENERGY CLINCH SPOT IN COUNTDOWN TO THE CHAMPIONSHIP WITH SIXTH NO. 1 OF THE SEASON 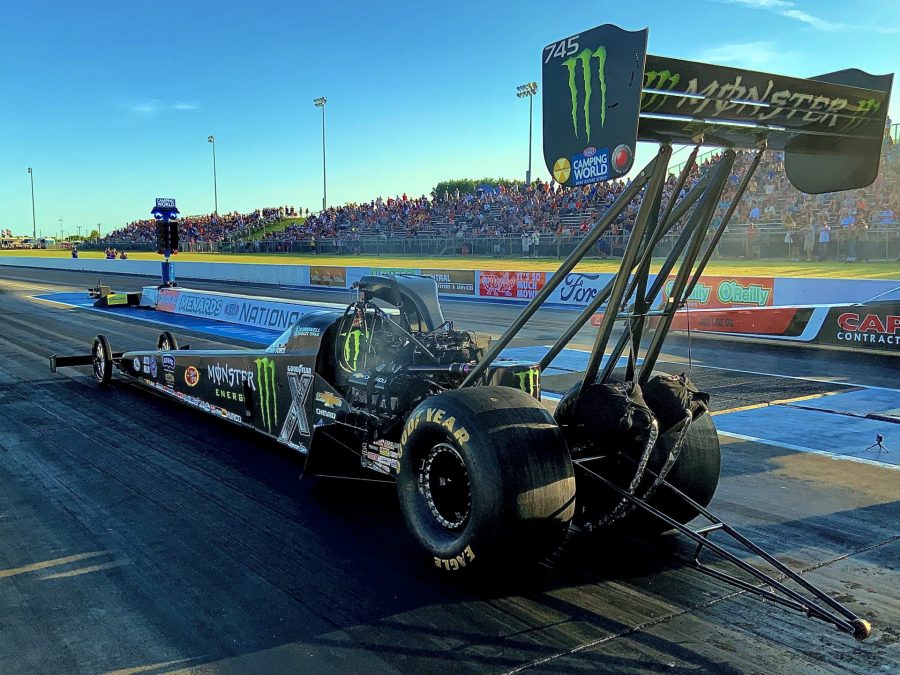 TOPEKA, Kan. (Aug. 14, 2021) – In the final session of qualifying, Brittany Force and her Monster Energy team stole the No. 1 qualifying spot at the Menards NHRA Nationals at Heartland Motorsports Park. John Force and the PEAK Antifreeze and Coolant Chevrolet Camaro will start race day from the No. 6 spot and Robert Hight and the Automobile Club of Southern California team will look to shake things up from the No. 14 spot.

Already in the No. 2 spot after Friday night’s 3.734-second run at 329.42 mph, Brittany Force and the Monster Energy team put a hole out during the second session on Saturday afternoon to cross the finish line at 5.687-seconds and 112.47 mph. For their final qualifying run, the David Grubnic and Mac Savage tuned dragster laid down a stellar 3.716-second pass at 329.02 mph that would earn them the No. 1 spot by one-thousandth of a second. It is the sixth time this season, third time at Heartland Motorsports Park and 26th time in her career that Force will start race day from the top spot.

“I’m really proud of this Monster Energy / Flav-R-Pac team. We earned ourselves another No. 1 qualifier, that’s four in a row. We’re looking forward to race day tomorrow,” said Force who has now secured her spot in the NHRA Countdown to the Championship, the NHRA’s seven race playoffs.“ We’ve looked at the ladder and we have a good set-up, there’s a bye in the second round into the semifinals. So, we’re looking for a long day. This Monster Energy team, we need to turn our luck around starting tomorrow on race day.”

Sitting sixth after a clean pass during Friday night qualifying, John Force and the PEAK Camaro opened Saturday with another smooth run at 3.995-seconds and 314.68 mph and earned two bonus points for being second quickest of the session, a good sign heading into a race day. In the third session, Force and the PEAK team improved their performance with a 3.944 at 325.92 that earned them another two bonus points. The improvement wasn’t enough to move them up. Staying sixth matches Force with Paul Lee first round.

“I felt good today, really good. Danny Hood and Tim Fabrisi, all these young guys, they’ve given me a real hot rod. It does the job and it did it in the heat today which looks good for tomorrow,” said Force. “This PEAK Chevrolet makes me feel young again. I love being in that car and I love being in front of theses Kansas NHRA fans.”

Coming into day two at Heartland Motorsports Park sitting 14th after a timing problem and tire smoke on Friday, Robert Hight and the Auto Club team opened the day with more trouble. The three-time championship Chevy Camaro pulled to the right causing Hight to shut the car off early and cruise to a 6.502-second run at 103.85 mph. The Auto Club team continued with some bad luck into the final qualifying run where they had tire smoke and an early shut off for a 5.004-second run at 153.25 mph. Staying No. 14, they line up with Bob Tasca III in the first round, a match-up that could have major points standings implications, with Tasca only 32 points ahead of Hight in the Funny Car standings.

“Jimmy Prock and Chris Cunningham can turn this Auto Club Chevy Funny Car around in one run. This Auto Club team, we’re a little off this weekend. I’m not worried, they aren’t either,” said Hight who in 2019 won the event from the No. 9 spot and in 2018 went to the finals from the No. 14. “We’ve had success here, I have a lot of memories here, big events for me. Heartland Motorsports Park has always treated me well so hopefully that holds true tomorrow.”