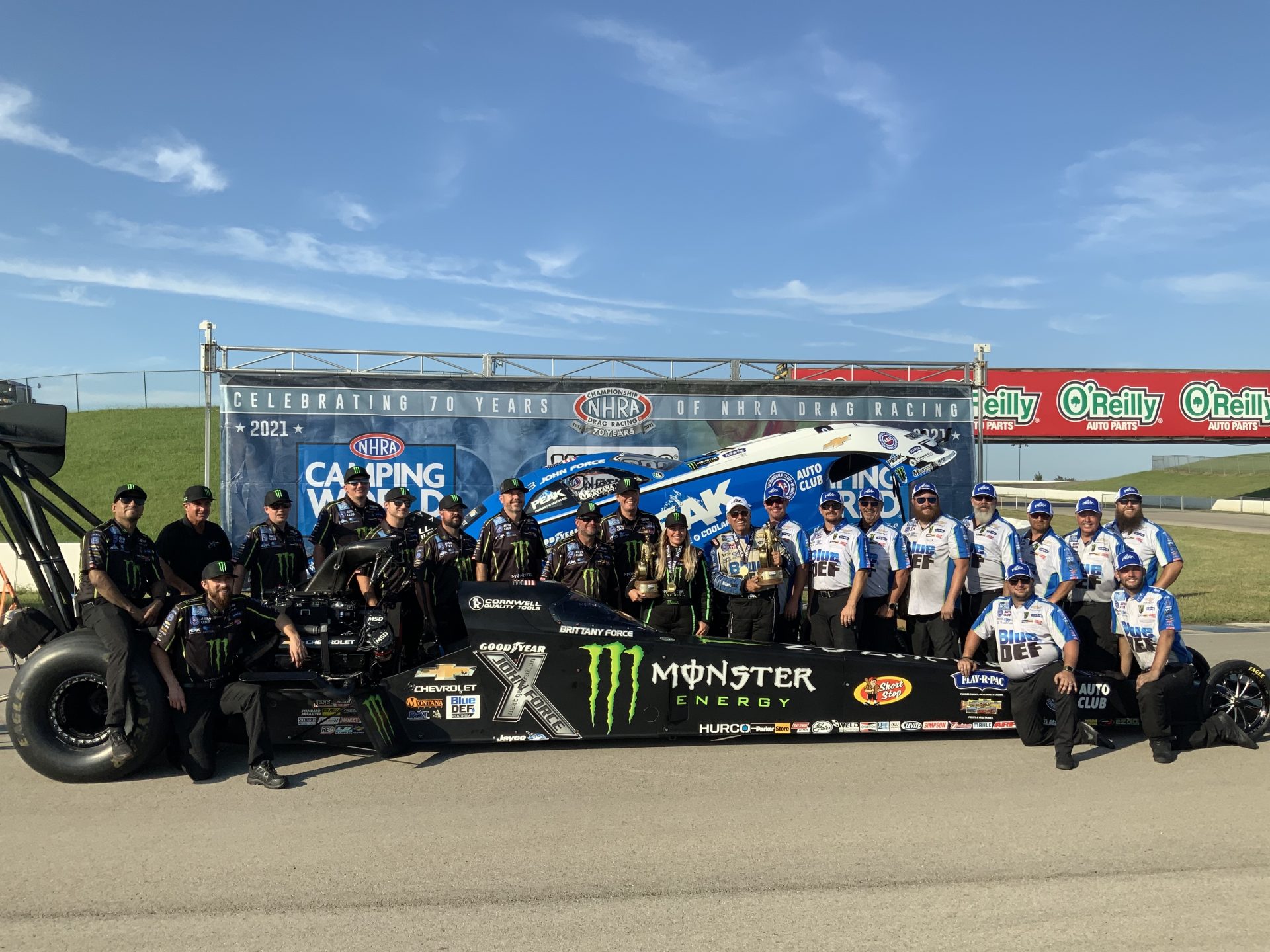 TOPEKA, Kan. (Aug. 15, 2021) – It was a historic winners circle at Heartland Motorsports Park for the Menards NHRA Nationals. For the first time in their careers Brittany Force, in her Monster Energy Top Fuel dragster, and her father, John Force, in his PEAK Antifreeze and Coolant Chevrolet Camaro SS Funny Car, won in their respective categories. Along with the wins, Robert Hight and the Automobile Club of Southern California Chevy had a quarterfinal finish.

It is the fourth time John Force Racing has had a Funny Car / Top Fuel double-up. Brittany first did it with Hight in Dallas 2017 and again in Houston 2019 before John Force and Austin Prock won together for John’s 150th in Seattle 2019. John and daughter Ashley Force-Hood, who married his now crew chief Danny Hood, doubled up at the Auto Club Finals in Pomona when she raced Top Alcohol in 2004.

“This is something I’ll never forget. This has been on my bucket list for as long as I can remember and there have been so many close calls where we thought, ‘Hey, this could be our day that we could double up,’ and just to get a race win is hard enough. Then you want to do it with your teammate, it’s almost impossible,” Brittany Force said. “So, you almost put it on the back burner; it’s too much to double up with your dad. You both run well all weekend long and you double up, it almost seems impossible. Today, we pulled off the impossible. It’s pretty cool that we’ll always share this. It’s a special racetrack for us and it’s pretty cool to have that with him.”

Entering into her third final round of the season, 26th of her career, Force would have lane choice over Clay Millican. Force would even her record against Millican to 9-9 with a 3.783-second pass at 324.75 mph. She would beat Millican on the starting line and never trail with his dragster going 3.830 at 288.58.

The victory is Force’s first of the season, 11th of her career and first at Heartland Motorsports Park. The last time Force picked up a win was in the fall race in Las Vegas 2019.

“It feels great. We came out strong, we’ve had a good season. We’ve had a bunch of No. 1 qualifiers, we just keep getting stuck on race day,” said Force who is now second in the points standings. “That’s hard for a driver, a crew chief, our entire team. That’s where you really want to excel, when you really want to do well. We have a closet full of No. 1 hats, but we don’t have those race day hats. I know it was right around the corner for us. Over the last few races, it’s been driver error, it’s been team error. Little things kept getting us. We knew eventually our luck was going to turn around.”

In the semifinals, Force was matched with long-time rival Cruz Pedregon. Force would extend his winning record against Pedregon to 76-36 when he powered the PEAK Camaro to a 4.005-second run at 321.35 mph. Pedregon would go 4.063 at 303.91. The win gave Force lane choice over J.R. Todd in the finals. It would be Force’s fourth final round of the year and 260th of his career.

This is Force’s 10th win at Heartland Park Topeka, 154th of his career and third this season. The last time Force won at this facility it was 2008 and his first victory after his devastating crash in Dallas 2007. The victory gave Force the points lead for the first time since October, 5, 2014, 135 races ago. Force has now led the points in 22 different seasons.

“I had a good day. Robert (Hight, second round) was probably my toughest race because it’s hard to beat Robert. I just had a car that was pretty fast. Got the win. What was special was I finally got that double up with Brittany. It means a lot for a family of racers. It was a great day with all the people I raced.

“I’m going after wins. I don’t talk about it because when you do you get lost why you came and you start focusing on that,” Force continued. “No, what you do is you drive your car. You love life and I fight. My race car keeps me alive and the cheer of the crowd. So, if it’s in the cards, we’ll win a championship. And if we don’t, I’ll be the first over there to congratulate who does. Because that is what it really is all about. The competition makes you better. Every time they beat me, they make me better.”

“We had some things figured out in that first round. Jimmy Prock and Chris Cunningham turned this car around. Just wasn’t our race this weekend. Luckily, we get to redeem ourselves right away and head to Brainerd next weekend,” said Hight who leaves Heartland Park Topeka tied for fifth in points. “Leaving here lower in the points that we want but we’re in the Countdown and we have two races to make-up some points. I’m not worried, this Auto Club team always comes through.”