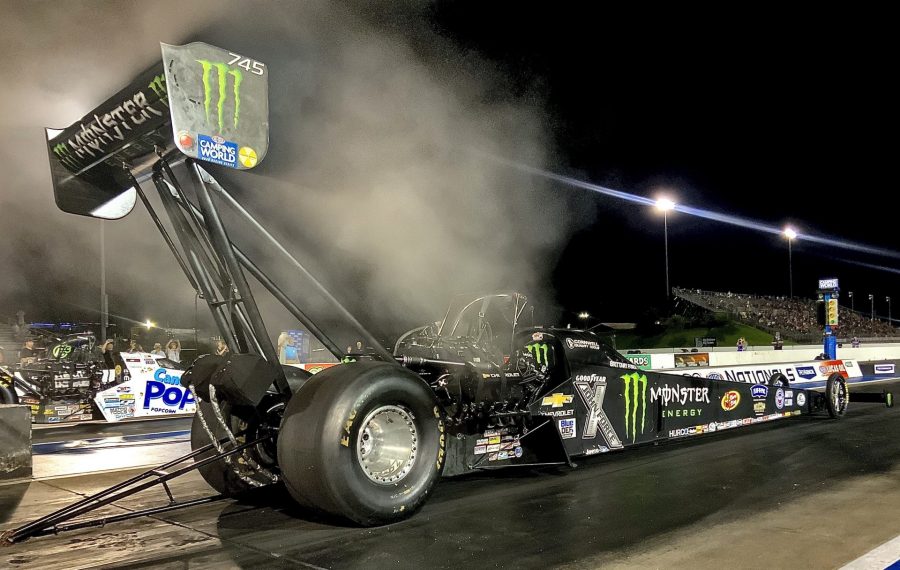 TOPEKA, Kan. (Aug. 13, 2021) – Brittany Force and the Monster Energy dragster ended Friday night qualifying at the Menards NHRA Nationals sitting No. 2 in Top Fuel. John Force and the PEAK Antifreeze and Coolant Chevrolet Camaro SS Funny Car are sitting No. 5 while Robert Hight and the Automobile Club of Southern California team are No. 14.

Force and her David Grubnic and Mac Savage led team sailed to a 3.734-second pass at 329.42 mph under the lights at Heartland Motorsports Park. Force is looking to grab her fourth consecutive No. 1 qualifying position, sixth of the season and third at the facility.

We’re off to a good start this weekend at Heartland Motorsports Park,” Force said. “First session a 3.73 and currently sitting No. 2, so tomorrow we’ll have the opportunity to push a little harder in that third session and really get us set up for race day.”

Lined up side-by-side with Robert Hight in the first qualifying run, John Force handled the PEAK Chevy to a clean 3.951-second pass at 326.63 mph to head into day two at Heartland Motorsports Park in the No. 5 spot.

“Back here in Kansas. Love it. Great fans here in the Midwest. We have a good car; it’s running well, and Danny Hood and Tim Fabrisi have it figured out. These PEAK guys are keeping me on my toes,” Force said. “I have to be on my game, focused, because I have to keep up.”

Hight and the Auto Club Chevy had a mishap on their first qualifying run. While the Auto Club Funny Car did shake the tires, something happened, outside of the team’s control, to trigger his time to give him an invalid time.

“Not the run we were looking for. We overpowered the track, so not getting a valid time, it doesn’t hurt us but it’s not the run we wanted to make either,” Hight said. “I’m not worried though, Jimmy Prock and Chris Cunningham always get this Auto Club Chevy figured out. We’ll get down the track tomorrow and be good for race day.”