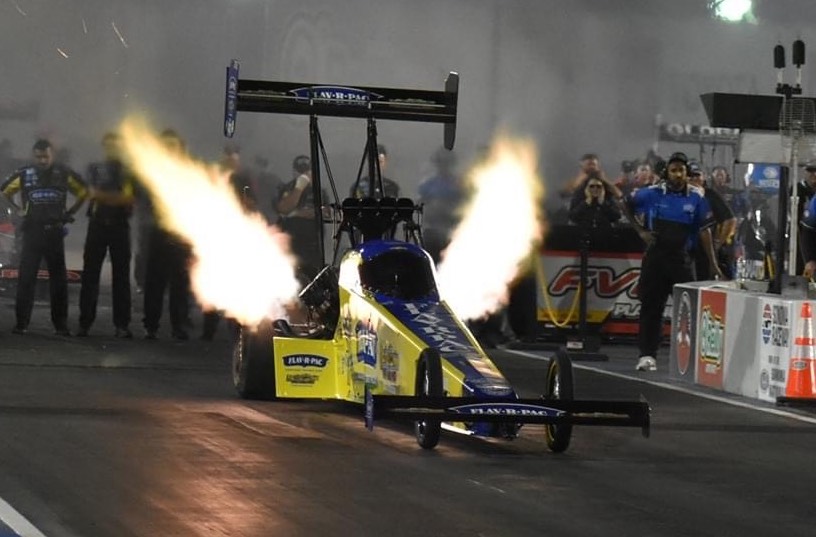 SONOMA, Calif. (July 23, 2021) – Under the lights with header flames lit, Brittany Force and the Flav-R-Pac dragster team landed themselves in the provisional No. 1 spot Friday at the NHRA Sonoma Nationals at Sonoma Raceway. Robert Hight and the Automobile Club of Southern California Chevrolet Camaro SS team are No. 4 and John Force with the PEAK Auto / BlueDEF Camaro will work their way up from No. 15.

Brittany Force handled her Flav-R- Pac dragster to a stellar 3.694-second pass at 329.42 mph Friday night. The ending was rough for the 2017 NHRA world champion, as the dragster blew up at the finish line, making for a long night for the Flav-R-Pac / Monster Energy team. If her time holds up, Force will have claimed her 24th No. 1 qualifying position, fourth of the season and second at Sonoma Raceway.

“Definitely wasn’t our best run. We’ll take that No. 1qualifier, though. 3.69 is pretty outstanding. We knew it was a great racetrack with the cooler conditions. Grubnic always likes to go up there and push, he wants that No. 1 spot,” Force said. “Right going through that finish line it just blew up and you feel it in there as a driver. It’s a big explosion behind you. It throws you around in the seat a little bit. You know it’s not pretty, it’s not the chutes coming out or them shutting you off on a run, it’s just an explosion behind you. It’s going to be a lot of work for my guys, they’re going to be out here all-night cleaning that car up, the injector was sitting sideways on it. So, it’s not pretty but, again, we’re No. 1 so we’ll take that.”

Robert Hight and the Auto Club Chevy team had a solid qualifying try laying down a 3.948-second pass at 324.59 mph. Their efforts put them in the No. 4 spot heading into Saturday’s last two runs.

“It was a clean pass, put us right in the mix. We know we’re in for Sunday which is important since we have a higher car count here this weekend,” Hight said. “Tomorrow will get us set for race day, running in the middle of the day. This Auto Club team will be ready. Hoping to keep the win streak here alive.”

Sitting No.2 in points, John Force and the PEAK / BlueDEF Chevy were the last pair of Funny Cars to qualify. Lined-up with the points leader and long-time rival Bob Tasca III, both veterans would run into trouble and shut off early. Force would coast across the line at 7.688-seconds and 86.93 mph.

“Well, we wet after it. So did Tasca. Trying to put on a good show for these awesome fans. We’ll be better tomorrow, get ourselves in the show and get ourselves set up for race day,” Force said. “This PEAK team has been working hard, we’ll make things happen.”

Qualifying at the NHRA Sonoma Nationals at Sonoma Raceway continues Saturday with sessions at 1 p.m. and 4 p.m. Eliminations will start Sunday at 11 a.m. For television coverage of qualifying, tune into FOX Sports 1 (FS1) Saturday at 2 p.m. ET and Sunday at 2 p.m. To catch the finals on television, watch FS1 at 4 p.m. on Sunday.