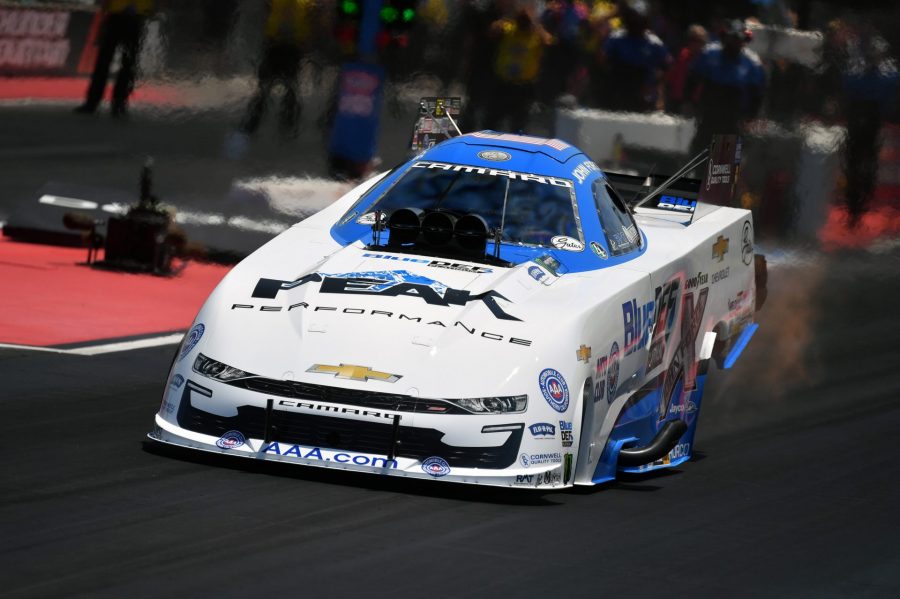 SONOMA, Calif. (July 21, 2021) – Holding steady at No. 2 in the NHRA Camping World Drag Racing Series points standings, John Force and the PEAK / BlueDEF PLATINUM Chevrolet Camaro SS team know that a win at this weekend’s NHRA Sonoma Nationals at Sonoma Raceway could push them to the top of the class.

Force and his Daniel Hood and Tim Fabrisi led PEAK / BlueDEF team’s steady climb began with a quarterfinal finish at the season opening Gatornationals. At the first four-wide event of 2021 at The Strip at Las Vegas Motor Speedway, Force would qualify No. 2 and at the NHRA Southern Nationals at Atlanta Dragway, Force and his PEAK / BlueDEF team would make their 257th final round appearance. Force earned his 161st No. 1 qualifying position before continuing his dominance into race day at the NHRA Four Wide-Nationals at zMAX Dragway and coming out with his 152nd national event victory. Force then tallied his second win of the season, 153rd of his career at the NHRA New England Nationals. At the most recent events in Norwalk, Ohio and Denver, Force had quarterfinal finishes.

“We survived the mountain. Dodged a bullet, didn’t lose any ground in the points standings. I’ve enjoyed the season so far. My team, Danny Hood, Tim Fabrisi, Joe Barlam, they’re really working with me,” Force said. “I have to work hard to keep up, keep up with this PEAK Chevy and keep up with the competition, but I’m having a good time. Enjoying being with my team and really competing.”

A win is not out of reach for Force who is the all-time leader in race wins with eight at Sonoma Raceway, the most recent in 2016. Force also has eight No. 1 qualifiers at the facility. The last two years NHRA has contested the Sonoma Nationals, Force has made it to the semifinals and for the past seven years the 16-time Funny Car world champion has qualified within the top 10.

“We get to keep things going this weekend. The Western Swing is something special, three races in a row all on the West Coast,” Force said. “The teams stay out on the road, it can be a long three weeks but hopefully we come out of it with a couple wins and the points lead. That’s what we’re out here for.”