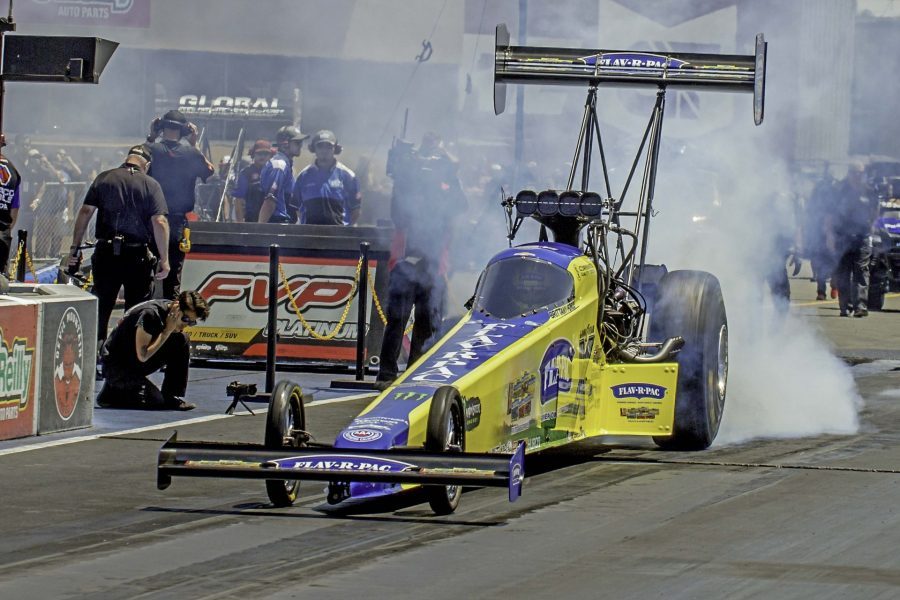 SONOMA, Calif. (July 24, 2021) – After wrapping up qualifying at the NHRA Sonoma Nationals at Sonoma Raceway on Saturday evening, Brittany Force and the Flav-R-Pac dragster team maintained their No. 1 status heading into race day. Robert Hight and the Automobile Club of Southern California Chevrolet Camaro are in the No. 4 spot with John Force and the PEAK / BlueDEF PLATINUM Chevy right behind them in the No. 5 spot.

The Flav-R-Pac / Monster Energy team kept up their performance from Friday night coming out Saturday afternoon with a 3.793-second run at 322.81 mph. In slightly cooler conditions Saturday evening, Force would run 3.716-seconds at 330.31 mph. Overall, Force would earn a total of six bonus qualifying points for her two-day performance.

“Two great runs today, all weekend qualifying, three phenomenal runs so we’re very happy with that and looking forward to tomorrow and getting this Flav-R-Pac dragster into the winners circle,” Force said. “It gives us confidence going into race day tomorrow. Three good runs, especially these runs earlier in the day, really getting us prepared for race day. Feeling good and just ready for tomorrow.”

This is Force’s fourth No.1 qualifier of the season; she was also No. 1 at both four-wide events in Las Vegas and Charlotte and at the most recent event the Mile-High Nationals in Denver. It is the 24th No. 1 position in her career. The Flav-R-Pac dragster will line-up with Ron August. Given the car count, Force could see a bye in the semifinals into the final.

Robert Hight stayed consistent on Saturday backing up his 3.948-second run on Friday that earned him the No. 4 qualifier with a solid 3.984 at 324.90. In the evening run, Hight and the Auto Club team went 3.951-seconds at 326.48 mph, quickest of the session earning him three bonus qualifying points for a total of four over the weekend. He’ll match-up with No. 13 qualifier Steven Densham, son of former driver of the Jimmy Prock tuned Auto Club car, Gary Densham.

“Love being here in Sonoma. It really is a home race for me being from Alturas. Lots of fans and supporters out here. First race back in California and we’re putting on a good show with the Auto Club Chevy,” Hight said. “Three good runs, going A to B, getting down track, staying consistent. I feel good going into tomorrow.”

It was a dramatic two days of qualifying for John Force and the PEAK / BlueDEF Chevy team. After shutting off early Friday night, Force improved in Saturday’s first session going 4.234-seconds at 222 mph but still had to shut off early down track. During the third qualifying session, Force would temporarily be bumped from the field before laying down a 3.965-second run at 324.67 mph to land in the No. 5 spot. He’ll face J.R. Todd in the first round.

“Well, that was exciting. Had my heart going, sure it did my PEAK guys too. That last run though, that was good. Got us down the track and gave us a shot at the win tomorrow,” Force said. “Our whole team is looking good for tomorrow. Both Robert with Auto Club and Brittany with Flav-R-Pac and Monster, they’re both running really well, consistent. Should be a good show. We’ll see how it goes.”

Eliminations at the NHRA Sonoma Nationals at Sonoma Raceway will start Sunday at 11 a.m. For television coverage of final qualifying, tune into FOX Sports 1 (FS1) Sunday at 2 p.m. To catch the finals on television, watch FS1 at 4 p.m. on Sunday.