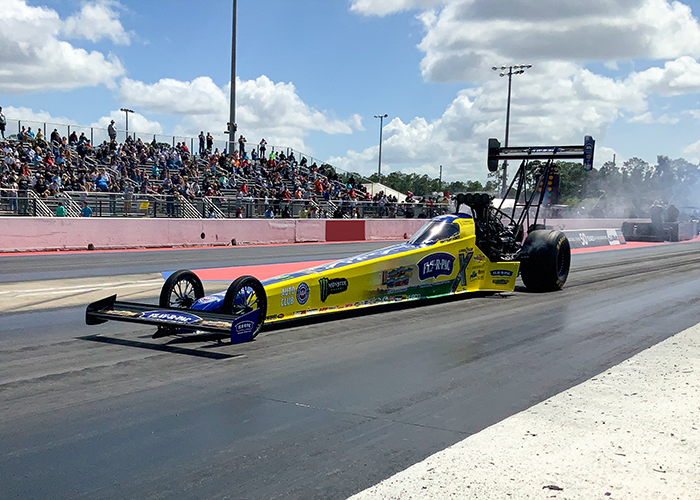 In the fall of 2019, Force crossed off a bucket list victory when she raced to the thousand-foot mark in only 3.652-seconds, a track record, at 334.73 mph to defeat three-time and reigning world champion Steve Torrence in the finals for the 10th win of her career. Force also set the national speed record during qualifying of the event when her dragster hit 338.17 mph adding to the national elapsed time record of 3.623-seconds she set at Maple Grove Raceway in Reading, Pennsylvania earlier that year.

“Vegas was our last win together in 2019. Vegas is one of my favorite tracks on the circuit and winning at your favorite track is something that can’t be beat,” said Force. “I’m excited to head to Vegas and start qualifying this Flav-R-Pac dragster. Our focus will be Saturday’s qualifying, especially that Q2 run setting us up for race day. We’re looking for more wins this season and ending the season with a championship.”

Force will be competing to be the first John Force Racing driver to claim a four-wide victory at the track she holds near to her heart. However, the 9-year veteran is no stranger to four-wide success. In 2016, Force became the first woman to win in the four-wide format at zMAX Dragway in Charlotte and in the spring of 2019, she was runner-up at The Strip to Mike Salinas who recorded his first win.

Coming off a year-long hiatus, Force and her David Grubnic and Mac Savage tuned dragster had a successful test session at Palm Beach International Raceway running low of the session with an impressive 3.670-second pass at 331.04 mph. They came out to the season opening Gatornationals at Gainesville Raceway in March and proved their test was no fluke as they consistently ran in the top five quickest of the qualifying sessions. The consistency continued on race day with a 3.727 pass at 331.94 mph, but Force would take the first-round loss on a holeshot with a reaction time of .072-seconds to her competitor’s .034.

“Gainesville was the first race of the NHRA 2021 season. It was a good to be back with my team, on a racetrack, finding our routine again after a year away. We qualified 5th but unfortunately had an early exist on race day in round one,” said Force. “We have an amazing team with Grubnic returning as crew chief along with Mac. Our same team carried over from when we last completed February of 2020. I think that speaks for itself. It proves how dedicated this team is, they stood by JFR through our difficult decision to step out last season. I’m proud to be returning with every single one of them.”

Before John Force Racing made the tough decision to sit out the 2020 season, Force had landed in the No. 1 qualifying position at both the Winternationals in Pomona, Calif. and the NHRA Arizona Nationals in Phoenix.