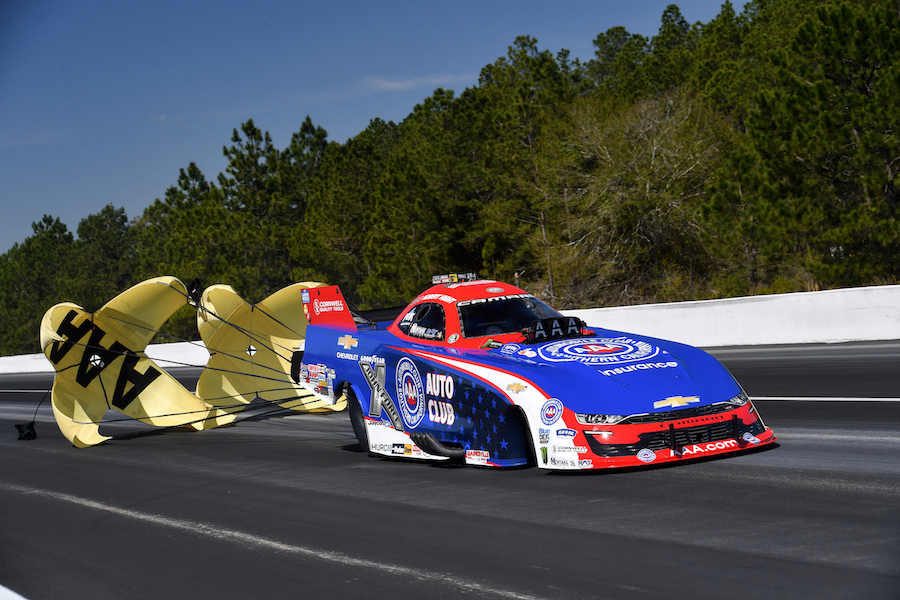 After qualifying fourth at the Gatornationals, Hight and the Auto Club team continued their consistent weekend on race day. Hight defeated Bob Bode, team-owner John Force and long-time rival Bob Tasca III before facing J.R. Todd in the 81st final round of his career. It was a pedal fest as Hight and Todd went up in smoke at the hit. Todd was able to hook back up and finish with a 5.184-second pass at 286.38 mph while Hight and the Auto Club Camaro ran 6.591-seconds at 144.41 mph.

“We had a good start to the season at the Gatornationals. It was good to be back in the seat, be with the team and Jimmy Prock and Chris Cunningham. We had some gremlins, but we had some luck on our side too,” Hight said. “It’s a good weekend when you get to the final, but we beat ourselves so it’s time to do some polishing and get this Auto Club Chevy running the way we know how.”

Hight has won the spring event at The Strip three times in 2007, 2011 and 2012 but not since the race went to a four-wide format in 2018. He has also won the fall event in Las Vegas in 2009 and 2015. While Hight hasn’t had four-wide success in the West, he has had two victories at the NHRA Four-Wide Nationals held in the spring at zMAX Dragway in Charlotte.

“Racing in Las Vegas is always a good time. I’ve had some success there but I’m looking to add a Four-Wide Nationals victory to my list,” Hight said. “There’s a lot more going on when it’s four-wide but as long as you stay focused on what you’re doing and don’t worry about who’s next to you, it’s just like any other race. Whoever is in those other lanes, I’m not treating it any differently. The fans are the ones who really benefit from racing four-wide. Over 40,000 horsepower, the ground really shakes.”

Hight has qualified No. 1 at The Strip at Las Vegas Motor Speedway a total of seven times, four in the spring and three in the fall. He’ll be chasing his first No. 1 in the four-wide format at the venue, something he has done three times at the Charlotte four-wide event, most recently in 2019 when he also finished runner-up.