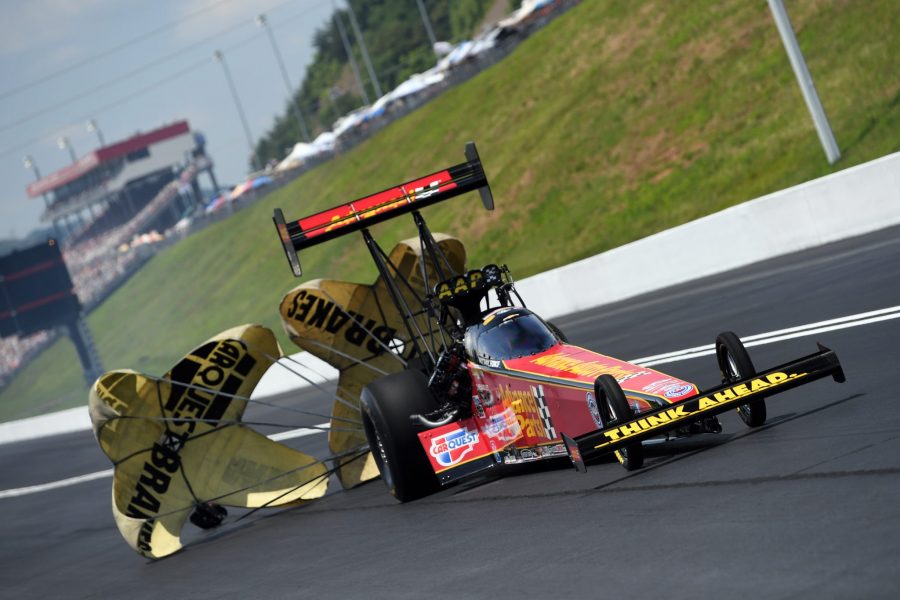 NORWALK, Ohio (June 20, 2019) — Brittany Force and the Advance Auto Parts Top Fuel team are making their way to the Summit Racing Equipment NHRA Nationals, the last race in the four in-a-row, determined to get back their momentum and secure their second win of the 2019 NHRA Mello Yello Drag Racing Series season.

At the halfway point of the NHRA circuit, Force and the Advance Auto Parts team have tallied one win, two runner-up finishes and three No. 1 qualifiers to be fifth in the NHRA Mello Yello points standings. The 2017 Top Fuel world champion has also added to the NHRA history books with two of her green hat starts. At the 50th anniversary Gatornationals, where she secured her first No. 1 of the season, she set the Gainesville Raceway track elapsed time record while becoming the first woman since Shirley Muldowney 40 years ago to qualify in the top spot at the event. At the SpringNationals, where she also took home her ninth career Wally, Force was the No. 1 qualifier alongside her legendary father, John Force to make them the first professional parent-child duo sit as No. 1 qualifiers in NHRA’s history.

A series of early Sunday exits moved the 2017 Top Fuel champ from second to fifth in the NHRA points standings. With the hopes of getting rid of their recent gremlins, Force and her Advance Auto Parts team stayed behind in Bristol following their first-round exit to test.

“We had an early day at Bristol and lost round one, so this Advance Auto Parts team made the decision to stay behind and test. We spent all day Monday testing and made four half-track passes to figure this car out and I feel like we’re in a better position going into Norwalk,” said Force. “David Grubnic and Mac Savage, they’re positive after that test session we had. All my guys are feeling good so that gives me confidence going forward.”

Although Force has yet to win at Summit Racing Equipment Motorsports Park, she’s qualified inside the top five for three consecutive years including back-to-back No. 2 qualifiers in 2017 and 2018.

“We’re all ready to get to Norwalk and see what this team can do. We’re hoping to get this thing in the top of the field and make some good passes at qualifying and on race day. We only have one win under our belt this year, so we’re ready to get back in that winners circle and I’m hoping it comes this weekend,” said Force. “It’s the last race of the four in-a-row and my team has put in a lot of hard work, so it would be great to get a win.”