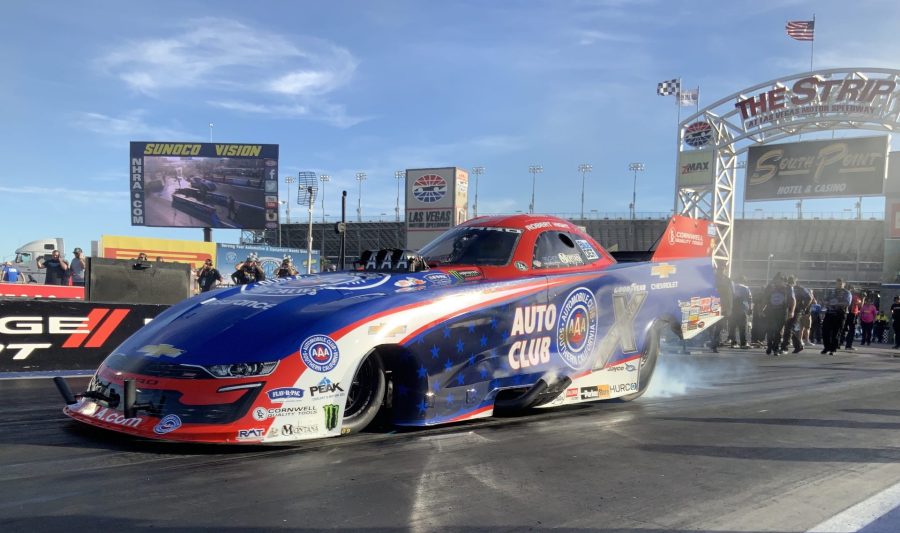 LAS VEGAS (Oct. 31, 2021) – Robert Hight and the Automobile Club of Southern California Chevrolet Camaro SS team found some consistency at this weekend’s Dodge//SRT NHRA Nationals at The Strip at Las Vegas Motor Speedway. Both Hight and Brittany Force with Monster Energy / Flav-R-Pac made semifinal appearances while John Force PEAK Antifreeze and Coolant Camaro SS had a first round exit.

Brittany Force and the Monster Energy dragster team continued their perfection from qualifying into the first round of eliminations when they laid down the quickest run of the round at 3.670-seconds and 330.80 mph sending Troy Buff and his 3.914 at 299.60 to the trailer. Facing Leah Pruett in the second round, Force would have the win before crossing the line. Pruett would leave too soon for a red-light disqualification. Force would make a full clean pass going 3.745-seconds at 330.39 mph sending her into the semifinals against eventual event winner Mike Salinas who would have lane choice.

“Definitely an intense weekend for this Monster Energy / Flav-R-Pac team. We were perfect through qualifying, had an incredible race and just got beat. That semifinal round against Salinas, we can’t hang our heads we all did our job. I was there on the tree, we had a killer car and we just got beat,” Force said. “It’s frustrating, its’ tough to pack up and leave Vegas when we were so close to getting to that final round, moving up in points and getting closer to that No. 1 spot. But we will pack up and head to Pomona. We aren’t out of it, we still got a shot and we will chase it down the best that we can.”

The victory would set Hight and the Auto Club Chevy to face veteran Ron Capps. Capps would have lane choice over Hight putting the Auto Club Camaro in the right lane. The three-time world champion’s Chevy Camaro would drive into tire smoke mid-track to cross the line at only 5.520-seconds and 130.85 mph. Capps would have a 3.904-second run at 326.87 mph for the win.

“Not a bad day for this Auto Club Chevy. We went a couple rounds, made some good runs,” said Hight who stays seventh in points. “Heading to Pomona, we want to finish out the season strong. Feel like after this weekend, we’ll be able to do that, get some big round wins and see what happens.”

John Force and the PEAK team had a short race day after piston damage shut the Chevy Camaro off early at about 200 feet for only an 8.479-second pass at 73.28 mph which was bettered by Chris Morel’s 5.749 at 122.13 after he shuts off early at about 400 feet. With the firt round loss, Force shifts to No. 5 in the points standings.

“Well, that hurt us. This PEAK Chevy, we wanted to go some rounds, get a win and move our way up. Didn’t happen but we’re still mathematically in it,” Force said. “Pomona, the Auto Club Finals, we get point and a half. Anything can happen. It was a wild race day with Hagan going out early too and J.R. but it’s still going to be a fight. It’s exciting.”