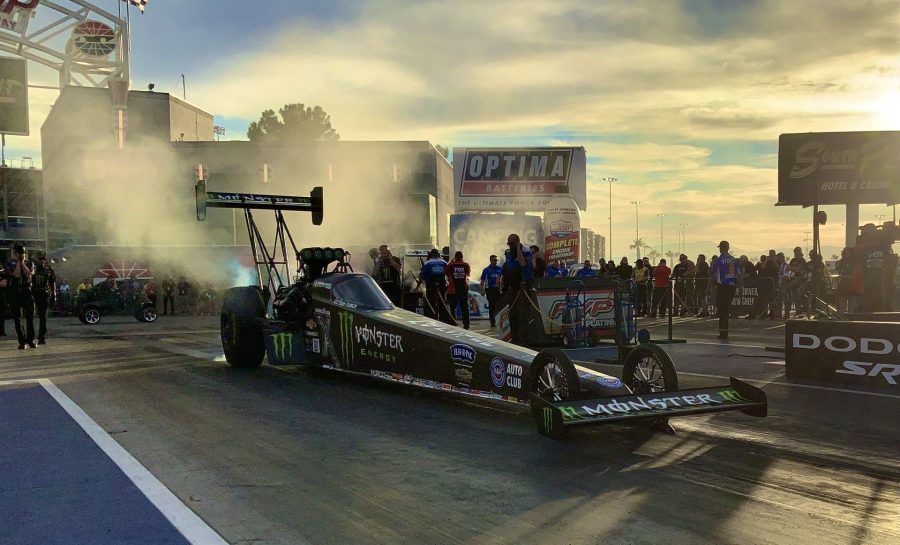 LAS VEGAS (Oct. 30, 2021) – Brittany Force and the Monster Energy team collected their 12th No. 1 qualifying position of the season Saturday at the Dodge//SRT NHRA Nationals at The Strip at Las Vegas Motor Speedway. John Force and the PEAK Antifreeze and Coolant “Brute Force” Chevrolet Camaro will start race day from No.2 and Robert Hight and the Automobile Club of Southern California Chevy are No. 5.

Brittany Force and the Monster Energy team, now just 65 points out of the points lead, carried over their performance from Friday night to be perfect through qualifying and pick up a total of nine bonus points. They opened Saturday’s two sessions up with an impressive 3.712-second pass at 331.36 mph in what will be the closest conditions to race day. In the third and final qualifying run the David Grubnic and Mac Savage tuned Monster Energy dragster laid down a stellar 3.668-second pass at 331.94 mph to secure their 12th No. 1 of the season and the 32nd of Force’s career.

“Really successful qualifying for our Monster Energy / Flav-R-Pac team. We had three great runs which gives this whole team a boost of confidence. We’re in the hunt for this championship and we’re in a great spot. We have that No. 1 and we got a ton of bonus points,” said Force who will race Troy Buff to start race day. “This team is unique, I can’t say enough about them. They are the hardest working guys I have ever worked with and I’m incredibly proud to be teamed up with every single one of them.”

John Force and the PEAK Chevy had trouble during their second qualifying go. Tire smoke would slow the Camaro Funny Car to a 6.093-second run at 108.41 mph, but Force would stay No. 2 going into their last qualifying lap. Force would handle the “Brute Force” branded PEAK Camaro to a stout 3.908-seconds at 326.56 mph to maintain the No. 2 spot and race against Chris Morel in the first round.

“Not a bad day for the PEAK Chevrolet. Worked our way to staying No. 2,” Force said. “We’ll go out and put on a show. Fans have been great, packing the stands. Our sponsors are out and having a good time, PEAK, Flav-R-Pac, Monster, Auto Club, Cornwell, all of them. We’ll be ready for tomorrow.”

Robert Hight and the Auto Club team ran into more smoke during Saturday afternoon’s pass. Hight was able to pedal it and hold on for a 4.313-second run at 310.98 mph. The improved run kept Hight No. 14 heading into the final qualifying session. The Auto Club Chevy would get back on track during the final qualifying session to jump nine positions off a solid 3.910-second pass at 329.67 mph that earned him a bonus point for being third quickest. He’ll faceoff with Steven Densham in the first round.

“Better day today. That last run, getting this Auto Club Chevy down the track, that felt good. Definitely gave the team and myself more confidence going into race day,” Hight said. “Just had to go back to doing what we know how to do. Looking forward to a long race day tomorrow and getting this Auto Club Camaro in the Vegas winners circle.”

Sunday’s eliminations at the Dodge//SRT NHRA Nationals at The Strip at Las Vegas Motor Speedway are slated to begin at 11 a.m. Television coverage of the event will be featured on FOX Sports 1 (FS1) and continues with a second qualifying show Sunday at 4 p.m. ET followed by the eliminations show at 5 p.m. ET on FOX Sports 1.