ROBERT HIGHT NO. 1 AFTER FRIDAY QUALIFYING AT BRAINERD INTERNATIONAL RACEWAY 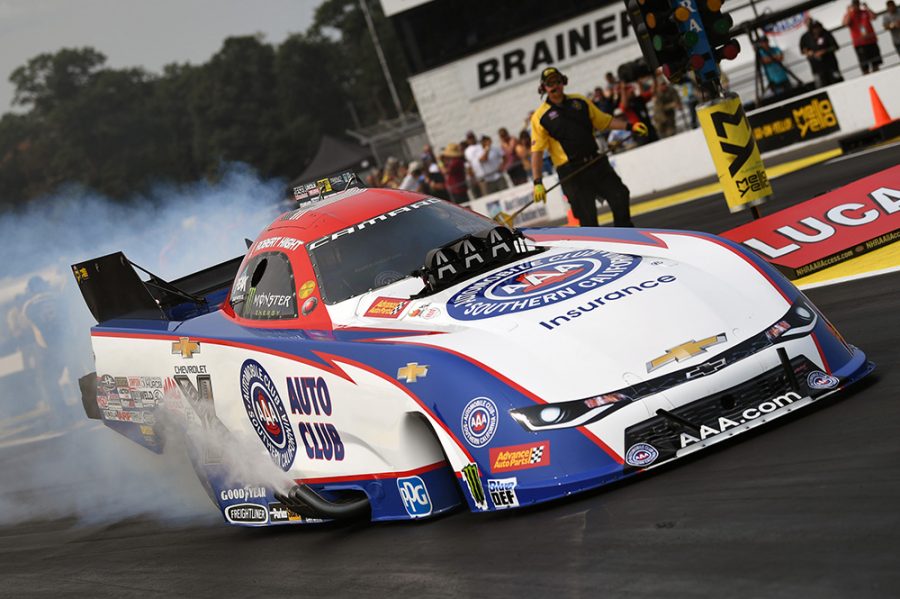 BRAINERD, Minn. (Aug. 17, 2018) — Robert Hight leads John Force Racing as the preliminary No. 1 qualifier in Funny Car at the Lucas Oil NHRA Nationals at Brainerd International Raceway on Friday evening. Brittany Force is in the 11th spot in Top Fuel in her black and green Monster Energy dragster and John Force and Courtney Force are looking to improve from the No. 13 and No. 14 spots respectively in Funny Car.

Hight, who set the Funny Car national elapsed time record at 3.793-seconds at Brainerd last season, earned six bonus points throughout Friday qualifying. His 3.971-second pass at 326.95 mph from the first session landed him in the No. 1 spot for the night and his 3.989-second pass at 324.83 mph was the quickest of the second session.

“To be honest with you, that 3.97 first run, I was pretty happy. I honestly thought if we screwed up tonight, that would only be fifth. For some reason nobody stepped up tonight and we actually slowed down a hundredth,” explained Hight. “On that second run (crew chief) Jimmy (Prock) said it needed more power. Maybe the track was a little better than we anticipated and the changes we made, the track ate up. You have to stay ahead of the racetrack and obviously we didn’t.

“Unfortunately, if you look at the weather forecast, it’s going to be cooler on Sunday so we should be able to run better on Sunday than we have. It’s all about consistency. You have a lot more confidence with your team, with your race car going into Sunday if you’ve made four good qualifying runs. So that’s the goal tomorrow, to be out ahead of everybody but going down the track,” Hight continued. “If we get six more points tomorrow, that’s big. We need every point we can get. We want to be up to No. 2. I don’t think anybody’s going to catch Courtney (Force). One and two in the Countdown, that would be pretty stout. It ran 326 mph first run and that was even faster than the dragsters ran, then 324 the second run even though Jimmy said it was down on power. We’ve got a good combination right now to where we can tweak it, pick it up, slow it down if we need to.”

John Force and the PEAK Coolant and Motor Oil Chevy Camaro struggled through the first qualifying session, smoking the tires to a 5.755 to be 15th. The sixteen-time champion improved marginally in the standings when he put down a 4.082-second pass at 321.42 mph to be No. 13.

“It was a struggle today, but we’re all in the show. Courtney with Advance Auto, Brittany and Monster and Robert is up there in No. 1 with Auto Club,” said Force, who has a record 11 wins in Brainerd. “We are still learning. We’re fine, we’re in the show and we have two more sessions tomorrow to improve and figure this PEAK Coolant and Motor Oil Camaro out.”

Courtney Force, like her dad, smoked the tires on her Chevy Camaro and landed in the No. 16 spot to open qualifying with a 6.006-second pass. Force and the Advance Auto Parts team improved in the second session laying down a 4.097-second pass at 313.15 mph that puts her in the No. 14 spot with two qualifying runs left.

“We are struggling a little bit in the first day of qualifying. We had some bad tire shake in the first round, I think we were trying to push the car too hard,” said Force who has 10 No. 1 qualifiers already this season. “In Q2 we went up there and had a decent run, got down to the other end but we had a hole out so it slowed us down to run only a 4.09. So, tomorrow we’re looking for a big jump up there. We’re looking to make a big improvement in Q3 and we think that we can if the conditions are there. I’m excited to see that our teammate Robert Hight is running strong with his Auto Club car in the No. 1 spot. Hopefully we can figure out what they’ve got going on and hopefully get it working over on our end.”

Brittany Force continued the theme of a rough first qualifying run for the Force family by smoking the tires to a 4.187-second pass but the session was rough for the whole field and landed Force in the No. 6 spot. The reigning world champion and her Monster Energy dragster suffered from more tire smoke in the second session crossing the finish line at only 4.799 seconds. Force will have two more runs to improve out of the No. 11 spot.

“I’m happy to be back in Brainerd. We won here a few years ago,” said Force. “I’ve been saying this for a few weekends and it’s true, we’ve been struggling. I’m hoping we can turn things around. Really trying to figure this car out. We didn’t in Q1 and Q2 but we have two more tomorrow before heading into race day. We’re back in black-and-green this weekend and looking for a win so we’ll go out there tomorrow and look for improvement and try to gain some consistency.”

Qualifying at the Lucas Oil NHRA Nationals continues Saturday with two sessions at 1:30 and 4:30 p.m. Eliminations are slated for 11 a.m. on Sunday and you can catch the finals live on FS1 at 2 p.m. ET.