ROBERT HIGHT POWERS AUTO CLUB TO SECOND NO. 1 OF THE SEASON 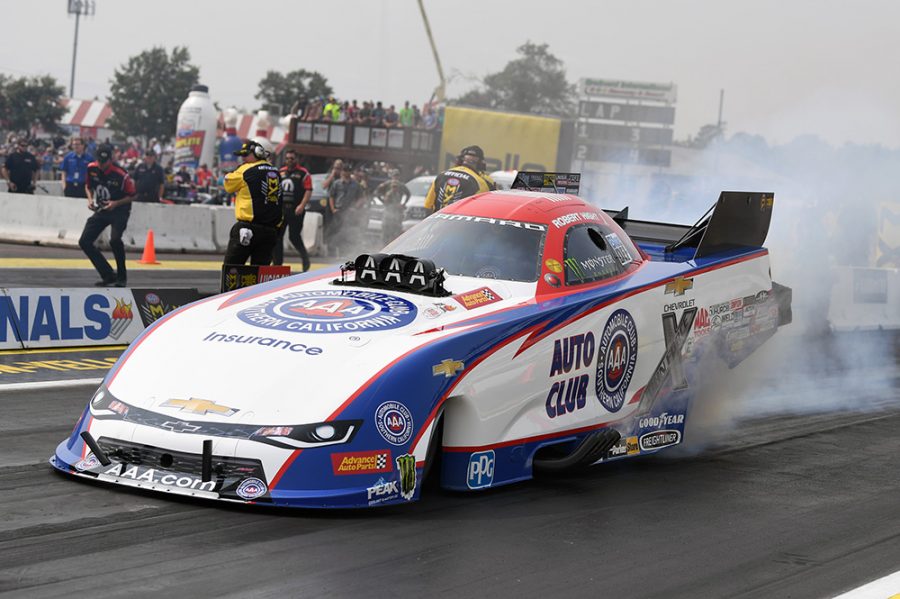 BRAINERD, Minn. (Aug. 18, 2018) — Robert Hight and the Auto Club of Southern California Chevrolet Camaro SS Funny Car team raced to the No. 1 qualifying position Saturday at the Lucas Oil NHRA Nationals. Funny Car teammates, Courtney Force and John Force, are No. 10 and 13, respectively, and, in Top Fuel, Brittany Force jumped to the No. 6 position.

Hight, who now has two No. 1 qualifiers this season, his first in Houston, was quickest three of the four sessions earning 11 valuable bonus points. He came out of the trailer to run a 3.971-second pass at 326.95 mph that earned him the provisional No. 1 on Friday and then a 3.989-second pass at 324.83 mph in the second session.

Saturday, Hight and the Auto Club team had a stellar 3.959-second pass at 324.67 mph to wrap up the third qualifying session during the warmest conditions of the weekend. They continued the theme of three-second runs with a 3.994 pass at 324.59 mph to close out the day and were second quickest of the session.

“(Crew chief) Jimmy (Prock) thought we could step up and we ran what he thought it would. The left lane is the better lane. He was going for it. I am surprised other teams didn’t run better,” said Hight of his Q3 3.959 second pass that earned him the 59th No. 1 position of his career. “The conditions were really good today. We got all the bonus points except one in qualifying. I am pretty jazzed because this is the time of year you better have your act together. It is starting to come together for us. We were No. 1 here last year but didn’t get the win. We are hoping to get that win this year.”

Hight will race a familiar foe in the first round, Cruz Pedregon. Hight is 28-15 against Pedregon and 2-1 against him this year. Hight’s eleven bonus qualifying points ties the most earned by a John Force Racing driver.

After a rough Friday qualifying outing where Brittany Force and the Monster Energy team smoked the tires both passes, Force found her stride. In the third session, Force ran 3.863-seconds that put her 10th and then, in the fourth qualifying session, ran 3.803-seconds at 325.53 mph making the jump to sixth.

“We definitely made a big jump today. That was a nice improvement for this Monster Energy team. We moved up from tenth to the No. 5 spot. That was a big move for us and we had an awesome run and went straight down the track. We put a 3.80 on the scoreboard,” Force said. “We are matched up against Richie Crampton again and this Monster Energy team is looking to go some rounds tomorrow. We are looking for consistency and we want to keep doing the same thing every round. We want to turn on some win lights on Sunday.”

It is the third consecutive race Force has faced Crampton round one, the split their previous two matchups but Crampton has a 10-7 record against Force overall.

Courtney Force and the Advance Auto Parts Chevrolet Camaro also struggled through Friday qualifying to start Saturday from the No. 14 position. She made her way to the No. 8 position in Q3 with a 4.025-second pass at 318.09 mph but was unable to improve in the fourth session and was bumped down to 10th.

“Our Advance Auto Parts team didn’t make the improvement we were looking for. We made two more passes today and we are struggling with our race car putting holes out down track,” explained Force, the Funny Car points leader. “We are feeling confident we can end the weekend better than we started it. We are starting from the No. 10 spot and we’ll be up against Jim Campbell in the first round. We feel confident we have figured out what we need to change for race day so we are looking forward to Sunday. We will be ready for the first round.”

John Force was also among those that struggled through Friday qualifying but for him and his PEAK Coolant and Motor Oil Chevrolet Camaro, it continued into Saturday. They did race to a 4.029-second pass at 322.04 but with the entire field improving he remained in the No. 13 position.

“We did improve, it’s just everyone else did too. Always learning. These guys over here, Jon Schaffer, Ronnie Thompson, all my young guys, they’re working hard. It’s showing,” said Force who has won at Brainerd International Raceway a record 11 times. “All we can do is to continue to work hard, look to improve and get the car from A to B. We’ve got to keep it going. The Countdown is coming and I’m looking to contend for the championship.”

Force will race against another veteran driver, Tim Wilkerson, in the first round. Force is 38-19 against Wilkerson.